On the morning of November 28, CBC Radio’s The Current aired an interview with Hamas’ first female spokesperson, Isra Al Mudallal, that we regard as being a whitewewash of this outlawed terrorist organization.

You can listen to this interview in full by clicking here or on the image below: 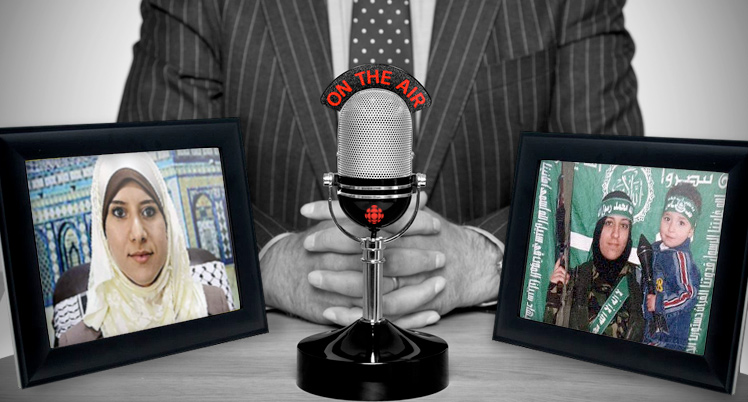 You’d think that a lengthy interview ostensibly on affirmative action and women climbing up the workforce ranks in Gaza society/Hamas public relations (propaganda) would have seen CBC host Anna-Maria Tremonti confront the Hamas spokesperson with questions about what life is like under a Sharia-enforcing repressive regime, one which calls for Israel’s destruction and which continues to commit and support terror against Israelis. Instead, this interview ignored these major elephants in the room.

CBC simply encouraged its listeners over Twitter to “meet” this terrorist spokesperson of Hamas:

It was especially bothersome that CBC linked to her Twitter account as CBC readers may go to her profile and they may have seen this antisemitic cartoon portraying Israeli Prime Minister Benjamin Netanyahu as stamping Gazan children as terrorists to be burned in Holocaust-like ovens called Gaza. 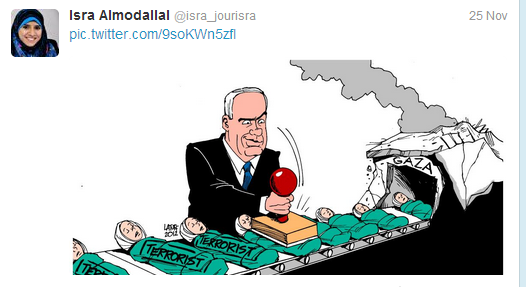 Importantly, comparing Israeli policies to the Nazis is antisemitic, so says the Ottawa Protocal on combating antisemitism. With that said, we acknowledge that CBC has the right to interview this Hamas spokesperson. An interview which was of considerable length, clocking in at almost eight and a half minutes.

In analyzing the CBC’s interview, we recognize that anchor Tremonti twice acknowledged that the Canadian government refers to Hamas as a terrorist organization. Regrettably though, Ms. Tremonti did not describe any specific Hamas attacks or that Hamas’ covenant calls for Israel’s destruction. CBC did acknowledge that Canada cut off aid to the Palestinians once Hamas came to power in Gaza, but failed to mention that Canada continues to give $300-million to the PA in West Bank over a five-year term. As well, CBC failed to point out the rampant repression of women in Gaza under Hamas’ rein and how Hamas’ morality police enforce strict Sharia law dictating how women should act and dress in public, including restrictions of public swimming unless fully covered.

In sharp contrast, the Globe and Mail recently acknowledged the following in its profile of this Hamas spokesperson:

“Think of Hamas and you conjure up images of suicide bombings, rockets being launched on Israel and perhaps a strict religious code especially as it applies to women. These are images – all based on historic fact – that make it difficult for the movement to be taken seriously as an interlocutor by Western powers. It doesn’t matter that Hamas has not carried out suicide bombings since 2005, the images of those attacks linger and no Western electorate is clamouring for its government to change its approach to the organization.”

“You could say that Hamas has not always been in touch with its feminine side. In the six years since the militant organization took over the Gaza Strip, it introduced a number of measures against “un-Islamic behaviour.” Women were required to wear head scarves; they were prohibited from smoking water pipes in public, and female mannequins in shop windows had to be modestly dressed. A modesty patrol even walked the beach in summer, insisting that female bathers be fully covered and not consort with men.

All of it played to the stereotype of an extremist organization.”

“Aziz Dweik, a Hamas member of parliament from the West Bank city of Hebron, was a popular choice among all Palestinian parties in 2006 for the position of speaker of the legislature. Dr. Dweik, who got his PhD in geography from the University of Pennsylvania, always made it clear Hamas was willing to live in a Palestinian state alongside Israel; regardless of what Hamas’s covenant said about striving “to raise the banner of Allah over every inch of Palestine.”

We also recognize that Ms. Tremonti did correct the Hamas spokesperson when pointing out that Israel is not “occupying” Gaza because of the 2005 disengagement and that Israel and Egypt control the points in and out of Gaza. Regrettably though, no mention was made of the unprecedented Israeli efforts to facilitate aid to Gaza that are delivered to a warring nation. Nor was there any countering of the Hamas spokesperson’s claiming that a “humanitarian crisis” exists in Gaza. As a matter of fact, the Red 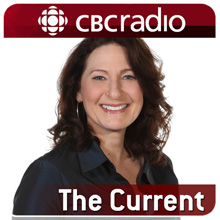 Cross, United Nations, and even Hamas itself acknowledges there’s no humanitarian crisis in Gaza. Thanks to Israeli efforts, Gazans have ample supplies of basic necessities and consumer goods, and are currently experiencing an economic boom and good standards of living.

In short, this CBC interview was marred for their host’s failure to confront this Hamas spokesperson’s false allegations about Israel and for not asking relevant pressing questions about Hamas’ repression of Gazan women and its quest to wipe Israel off the map.

HonestReporting Canada has already filed a complaint with CBC News and we await a reply to our concerns. At this time, we encourage you to send a letter directly to CBC The Current to register your concerns. Complaints can be sent at the following link: http://www.cbc.ca/thecurrent/contact/