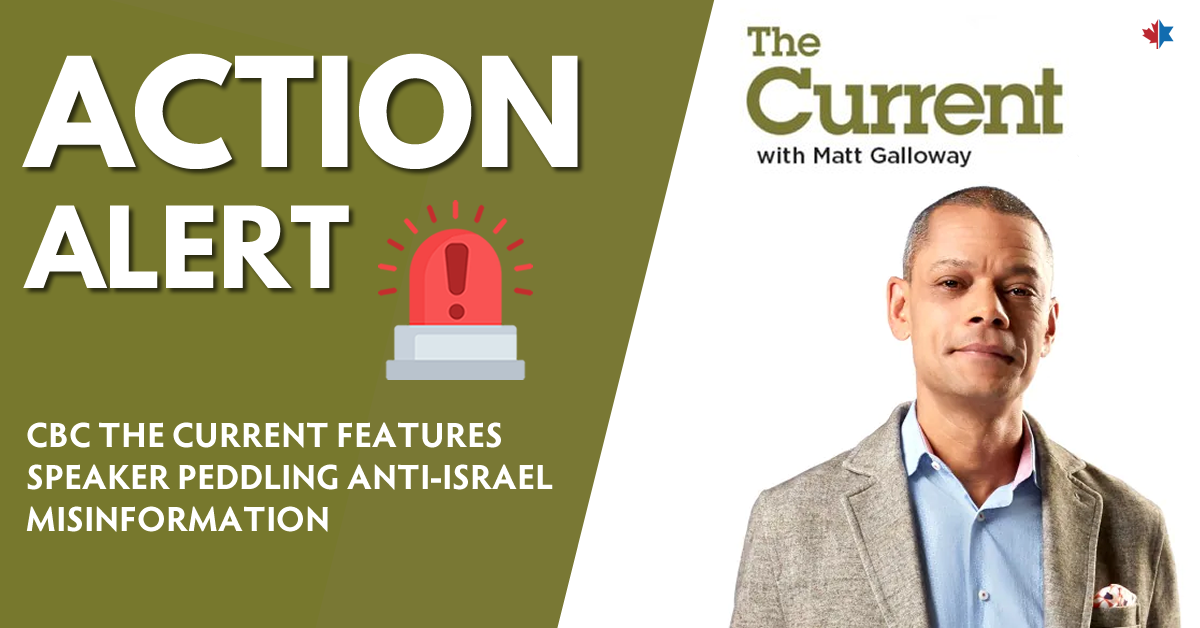 On the January 31’s edition of CBC’s The Current, host Matt Galloway discussed a new Israeli documentary film about the history of a small Arab village in pre-state Israel called Tantura, which was the site of an alleged illegal massacre of Arabs (referred to by the CBC as Palestinians) at the hands of a group of Israeli soldiers.

While the event itself is the subject of wide disagreement among Israeli historians and scholars, CBC The Current’s discussion of the documentary was not problematic by itself; after all, asking questions about history can only lead to a deeper understanding of the past. Furthermore, even Israeli media outlets like the Times of Israel and the Jerusalem Post covered the incident. However, while two of Matt Galloway’s guests provided a thoughtful, though sometimes oversimplified perspective, the third guest was little more than a regurgitation of the greatest hits of anti-Israel propaganda.

Galloway’s first guest was Alon Schwarz, an Israeli director who created the new documentary, Tantura, who mentioned that, far from attempting to stifle discussion around controversial elements in Israeli history, the Israeli government provided financial backing to his documentary, and will broadcast the film as well.

Galloway’s second guest, Hillel Cohen, a professor of Islamic and Middle Eastern studies at the Hebrew University of Jerusalem, gave an overall balanced interview, though he did draw a false comparison to Arabs who left Israel upon the Jewish state declaring independence, and Jews from Arab lands who after persecution, fled their homes in the years following Israel’s rebirth.

In his remarks, Cohen said “many Jews from Arab lands at this time left their countries of origin and immigrated to Israel,” and while it is technically true, it is extremely oversimplified. In actuality, while a great number of Arabs who left Israel in 1948 did so at the behest of local Arab leaders, who assumed the nascent Jewish country would shorty be overrun, a similar number – around 800,000 – Jews were forcibly expelled from their homes in the region, including Iraq, Iran, Syria, Yemen, Egypt, Algeria, and others. These Jews from Arab lands left their homes, not at the behest of local leaders, but due to violence – both promised and carried out – by their repressive governments.

But it was the third guest on The Current whose comments were the most detached from reality.

CBC gave the last word to Yara Hawari, a Palestinian writer and senior analyst at Al-Shabaka, The Palestinian Policy Network, and host of the podcast “Rethinking Palestine”, who told the host that “our material and archival history has been systematically destroyed and looted by the Israeli regime for decades.” This comment is especially perplexing, since it is the Israeli government which helped fund the development of this documentary, and Israeli television stations who are broadcasting it. Those are not the actions of a government and society attempting to stifle information, or censor the truth, but the complete opposite.

Hawari didn’t stop there. Rather than addressing the film itself, or the incident of Tantura, she launched into an anti-Israel tirade.

“What Israel continues to do…it’s very much a continuous part of our lived reality. Last year in May, the Israeli regime massacred Palestinians in Gaza,” Hawari told Galloway, who did not attempt to challenge or correct her.

Israel did not, contrary to Hawari’s assertions, commit “massacres”, “war crimes” and “atrocities” in Gaza during the 2021 war with Hamas in Gaza. The armed conflict began with violent Arab riots against Jewish targets in Jerusalem, which were cheered on by Hamas, who later fired an estimated four thousand rockets against Israeli targets, both civilian and military, killing not only innocent Israelis, but also one Indian and two Thai nationals who were working in Israel.

In the face of such overt terrorism, all countries, Israel included, have the right of self-defense. Despite Hamas’ proclivity to embed its terrorists within densely populated areas, Israel’s targeted focus was laudable.

The Current and host Matt Galloway deprived listeners of this context and instead granted Hawari a platform to vilify Israel and frame it as a systematic violator of human rights.

Accusing Israel of massacres last year in Gaza wasn’t the only misinformation peddled by Hawari on The Current, a news program which we critiqued at the height of the conflict last year for its bias against Israel.

Shortly afterwards, she dismissed the relevance of the Tantura documentary, saying it was part of a larger trend of dismissing “the indigenous narrative in favour of the settler’s narrative.” She then adds for good measure that we cannot ignore the “settler colonial project that is the Israeli state.”


Seemingly not content with accusing Israel of massacring Gazans last spring, Hawari has effectively erased three thousand years of Jewish presence in their homeland, referring to Israeli Jews as “settlers.” But Jews are not newcomers to the land; they have been living in ancient Israel for three millennia. This longstanding presence is proven by evidence both oral and written, and copious archaeological evidence, proving beyond a shadow of a doubt that the Jewish People are as intertwined with the land of Israel as the soil in the ground.

In this broadcast, The Current allowed its news story about a new documentary to be hijacked by an anti-Israel voice spreading tiresome anti-Israel misinformation, and worse yet, to go fully unchallenged by its host, Matt Galloway. Send a complaint to CBC The Current now by filling out their contact page form.