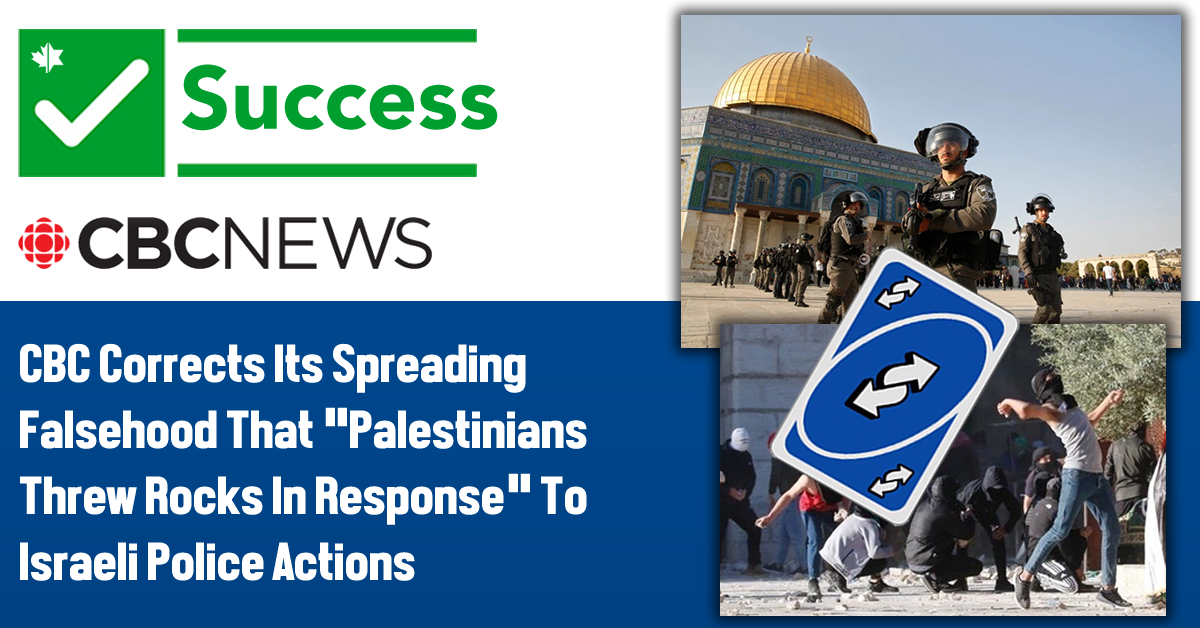 On the morning of April 22, CBC Radio broadcast the following report:

Tensions have exploded into violence again in Jerusalem. More than 50 people were injured today in fighting between police and Palestinians at the Al-Aqsa Mosque. Tens of thousands of worshippers had gathered there for Friday prayers. Israeli police say Palestinians were throwing stones and firecrackers near Jewish worshippers at the Western Wall. Police responded with rubber bullets and tear gas. This evening 3 rockets were fired from the Gaza Strip. One landed in Israel and two landed inside the Strip, reportedly injuring several Palestinians. It was the 4th day of rocket attacks in the past week. The events are raising fears of a more sustained conflict. Last year, an 11-day war erupted between Israel and Hamas after protests and violence in Jerusalem.”

In covering the continued rioting by Palestinian-Arab extremists on the Temple Mount compound and within the Al-Aqsa Mosque, CBC spread the falsehood that “Palestinians threw rocks in response” to Israeli police actions, whereas the inverse was only true.

Throughout the morning on April 21, CBC Radio broadcast a report which stated the following:

“Israeli Police fired rubber bullets and tear gas outside the Al-Aqsa Mosque in Jerusalem this morning. Palestinians threw rocks in response and say police temporarily limited their access to the Mosque so Jewish groups could tour the site. Ramadan and Passover coincide this year. Israel usually bars Jewish visitors from praying there because of the threat of violence and clashes. Al-Aqsa is the third-holiest site in Islam, but also revered in Judaism and the site of holy temples.”

To listen to the report in full, click below:

CBC has fundamentally reversed the chronology of events by framing Israel as the aggressor that initiated hostilities. In truth, and as the Times of Israel reports: “According to police, dozens of masked rioters entered al-Aqsa Mosque and sealed the doors before starting to hurl rocks and fireworks at officers, who responded with riot dispersal means.”

Video from this morning’s (Thursday, April 21, 2022) altercation on Al-Aqsa grounds.

It goes without saying that, naturally, the CBC ignored how Gaza-based terrorists recently fired a salvo of rockets at Israel which led to several Israeli injuries.

Video of Palestinian terrorists firing rockets from Gaza into Israel on Wednesday, April 20, 2022

HonestReporting Canada has filed a complaint with CBC News calling for an on-air correction to be broadcast given our public broadcaster’s transmission of this false accounting of events and broadcasting of misleading information.