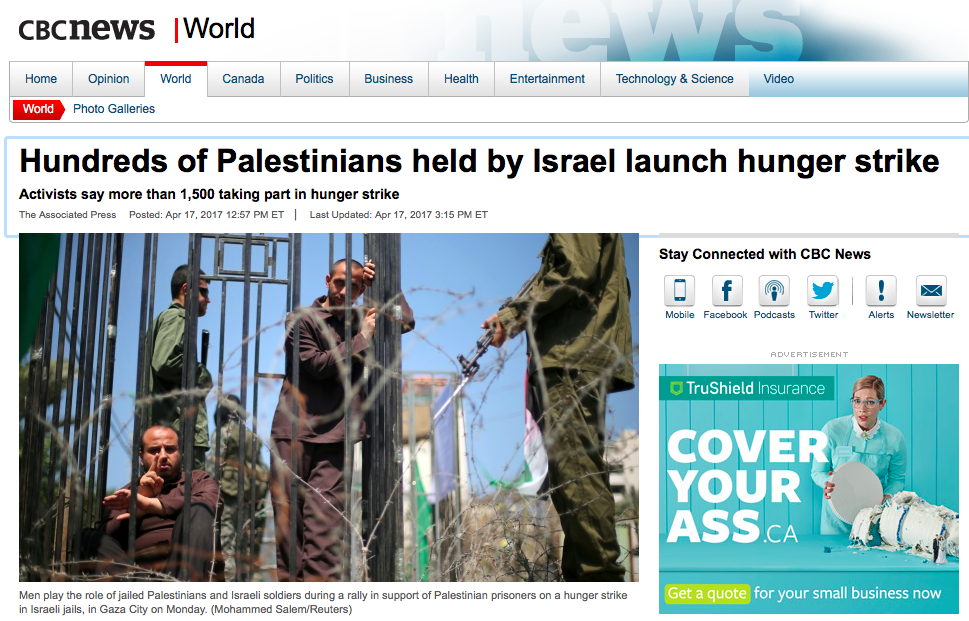 “Barghouti was arrested in 2002 during the violent Palestinian uprising and convicted on multiple counts of murder. Israel charged him with directing suicide bombings against its citizens and he was sentenced to five life terms.”

While we appreciate that a clarification notice was issued, it’s wholly unsatisfactory as it does not indicate that CBC amended their article to mention the context about Barghouti’s terror resume and how he was convicted for his role in the premeditated murder of five innocents. We’ve conveyed this concern to the CBC directly asking that this clarification be corrected. After all, transparency and accountability in corrections is vital and is required by CBC Standards and Practices.

On behalf of our 30,000 subscribers, HonestReporting Canada filed an official complaint today with CBC News for an April 17 article which sanitized Palestinian terrorist Marwan Barghouti as a mere “prominent figure”. Untold by the CBC is that Barghouti is a convicted murderer, not a political prisoner who was convicted for the murder of five innocent people and for being a member of a terrorist organization. 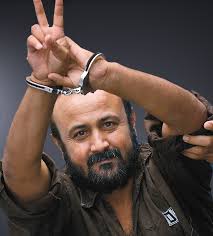 The CBC’s article, with files from the Associated Press and Canadian Press, is entitled: “Hundreds of Palestinians held by Israel launch hunger strike” and it stated the following in regards to Barghouti: (emphasis added):

“The hunger strike was led by Marwan Barghouti, a prominent figure in Palestinian President Mahmoud Abbas’ Fatah movement. Over the years, polls have indicated that Barghouti is the most popular choice among Palestinians to succeed the 82-year-old Abbas. Barghouti was arrested by Israel in 2002 for his role in a violent Palestinian uprising against Israeli occupation and is serving multiple life terms. He is one of the best-known among thousands of Palestinians jailed for charges ranging from stone-throwing and membership in groups outlawed by Israel, to attacks that wounded or killed Israelis. In an op-ed published in the New York Times, Barghouti wrote that Israeli prisons have become the “cradle of a lasting movement for Palestinian self-determination.”

Not disclosed by the CBC, but which was stated clearly in the Associated Press’ own article as seen in the Toronto Star, is the following about arch-Palestinian terrorist Marwan Barghouti:

“Barghouti was arrested in 2002 during the violent Palestinian uprising and convicted on multiple counts of murder. Israel charged him with directing suicide bombings against its citizens and he was sentenced to five life terms.”

“Barghouti, the strike leader, is a prominent figure in the Fatah movement of Western-backed Palestinian President Mahmoud Abbas. Polls suggest that Barghouti, 58, is the most popular choice among Palestinians to succeed the 82-year-old Abbas.Barghouti, a leader of the 2000 Palestinian uprising, is serving five life terms after being convicted by an Israeli court of directing two shooting attacks and a bombing that killed five people, including three Israelis. Barghouti, who disputed the court’s jurisdiction and didn’t mount a defence, has been in prison since 2002.”

For some unknown reason, CBC’s report did not include these important portions of the AP report which had brought much needed context about who Marwan Barghouti is, and why he is currently in an Israeli jail.

As it stands, CBC readers were only informed that Barghouti is a “prominent figure” and a “popular choice” to replace Palestinian President Abbas. We only hear that he was arrested for his “role” in Palestinian uprisings and that he’s serving multiple life terms, but why? Nothing is said. We are only told that he’s “the best-known” among thousands of jailed Palestinians.

Why Is Marwan Barghouti in Prison? The following is from the Israeli Ministry of Foreign Affairs:

“Palestinian terrorist leader Marwan Barghouti was head of the Fatah supreme committee in the West Bank and leader of the Al-Aqsa Brigades, which between September 2000 and April 2002 carried out thousands of terror attacks against Israel.

The following are some of the more heinous terror attacks for which he is responsible:

This important context about his terror resume deserves to be stated for the record, failing which, Barghouti’s nefarious legacy will continue to be sanitized by the CBC and its entire readership will be mislead and still, uninformed. Importantly, the New York Times itself published the following editor’s note to their op-ed after they failed to mention this context:

As well, the New York Times public editor Liz Spayd has responded on this issue mentioning how vital the above context was about Barghouti.

“Marwan Barghouti is an unusually popular political figure among Palestinians, especially for a man behind bars. He is a charismatic leader who has written three books and for many years has commanded an outsize presence beyond the Israeli prison where he is serving time. He was given five consecutive life terms after being convicted in an Israeli criminal court of premeditated murder for his role in terrorist attacks that killed five people, along with other crimes.”

“Dao noted that the piece does say the author received multiple life sentences but he acknowledged that it doesn’t state the crimes for which he was convicted. “We are drafting an editors’ note that will provide that information,” he said.”

“This isn’t a new issue for the Opinion section. I have written before on the need to more fully identify the biography and credentials of authors, especially details that help people make judgments about the opinions they’re reading. Do the authors of the pieces have any conflicts of interest that could challenge their credibility? Are they who they say they are, and can editors vouch for their fidelity? I see no reason to skimp on this, while failing to do so risks the credibility of the author and the Op-Ed pages. In this case, I’m pleased to see the editors responding to the complaints, and moving to correct the issue rather than resist it. Hopefully, it’s a sign that fuller disclosure will become regular practice.”

In light of this information, we respectfully requested that CBC amend their article and issues an editor’s note of their own to explain that Barghouti is a convicted Palestinian terrorist and is in jail for his role in the premeditated murder of five people.