In an HonestReporting Canada communique on April 23, we alerted you to how CBC Mideast Bureau Chief Sasa Petricic issued the following tweet which implicitly drew a moral equivalence between ISIS terrorists and foreign recruits to Israel’s armed forces: 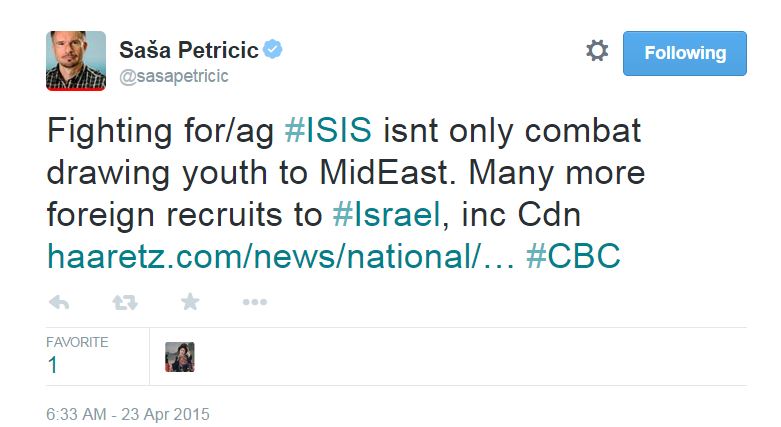 As we noted in our release, comparing ISIS’ recruitment from abroad, with a democratic country’s obligation to protect its citizenry from threats by internationally-designated terror groups was beyond the pale.

Following our complaint and the ensuing opprobrium directed at this CBC reporter, Sasa Petricic issued the following tweet:

Writing in response to a complaint sent by HRC subscriber Robert Wittes on May 22, Jack Nagler, the CBC’s Director of Journalistic Public Accountability and Engagement acknowledged that Petricic’s tweet was “written in haste, (and) was certainly clumsy” but denied that Petricic had violated any of the CBC’s journalistic standards.

His response can be found below along with a reply from Robert Wittes who has appealed to the CBC’s Ombudsman to review his grievances.

May 22 email from the CBC’s Jack Nagler:

Thank you for your April 24th email to the CBC Ombudsman drawing our attention to a tweet the previous day from our Middle East correspondent, Sasa Petricic, which you feel draws an entirely inappropriate parallel between ISIS and the Israel Defence Forces. Jennifer McGuire has asked me to reply on her behalf.

“This analogy was an outrageous and anti-Semitic comment,” you wrote of Mr. Petricic’s tweet. I greatly regret that you find the tweet offensive. And it was not Mr. Petricic’s intention to offend you, his followers on Twitter or anyone else who saw his message.

There is no question that any juxtaposition of the IDF and the Islamic extremist group controlling parts of Iraq and Syria is dangerous. This particular one, written in haste, was certainly clumsy. I understand that. However, you may have freighted his tweet with an implication that goes well beyond the plain meaning of his few words.

I want to very clear — to compare ISIS and the IDF is not only without any factual basis, but completely absurd. No CBC journalist or any other reputable journalist for that matter would ever draw such a parallel or make such a comparison.

Mr. Petricic is an excellent reporter who has won numerous awards for his work including Canada’s top award for television journalism. As you may recall, we posted him to our bureau in Jerusalem well over four years ago now, and he has filed reports regularly since then for all our CBC News platforms. He is an exceptionally conscientious reporter who justifiably takes great pride in his work in one of the most difficult places in the world to be a reporter. Does he have an anti-Israel bias? No, of course he doesn’t. He wouldn’t be there – or for that matter anywhere else as a CBC journalist – if he did.

Just to be clear, here is what he tweeted that Thursday morning: “Fighting for/ag #ISIS isn’t only combat drawing youth to MidEast. Many more foreign recruits to #Israel, inc Cdn haaretz.com/news/national/ … #CBC”

Of course, tweets are severely limited. There is no room for nuance, explanation or context. Their impact depends on timeliness, insight, wit, or in this instance, juxtaposition.

The news has been full of stories over the past few months about young men and women from Britain, the United States, France, Germany and Canada – 3,400 by some estimates — heading off to fight for ISIS. And although not so common, we have also seen stories about young men from many of those same countries travelling to Iraq to join the Kurdish Peshmerga fighting against ISIS.

What is not as well known is that young men and women from Western countries also travel to the Middle East to join the Israel Defence Forces. Mr. Petricic’s interest was piqued by a longish piece in Haaretz earlier that day (“Israeli army cites rise in number of overseas volunteers joining its ranks” – April 22) noting that some 3,500 “lone soldiers” join the IDF every year from more than 70 countries – some 3 percent of them from Canada.

That is a story I suspect that is largely unknown to most Canadians. It was one that Mr. Petricic saw as interesting enough draw to their attention. But to be clear, he is only saying that while we may have heard of youth going to the Middle East to join one military organization, did we know they were going to the region to join another one as well?

That’s it. There is no parallel; no implied comparison. There is certainly no explicit comparison. If there was any doubt, Mr. Petricic clarified what he meant in a second tweet. Hours later, he wrote: “Of course not saying joining the Israeli army is the same as joining ISIS. But seems something in ISIS awakened desire to oppose it & defend Israel too.”

Once again, I sincerely regret that you found this tweet offensive. However, I hope my reply has reassured you that no offense was intended.

It is also my responsibility to tell you that if you are not satisfied with this response, you may wish to ask Esther Enkin, CBC Ombudsman, to review the matter. The Office of the Ombudsman, an independent and impartial body reporting directly to the President, is responsible for evaluating program compliance with the CBC’s journalistic policies. The Ombudsman may be reached by telephone at 416-205-2978, or by mail at Box 500, Terminal A, Toronto, Ontario M5W 1E6, or by fax at (416) 205-2825, or by email at ombudsman@cbc.ca

Thank you, Mr. Nagler, for your response of today to my Emails of April 23-24, 2015. Thank you for expressing your regret that I found Sasa Petricic’s Tweet to be offensive. You continued by stating that “it was not Mr. Petricic’s intention to offend you.” I was not stating that I was personally offended by the Tweet (i.e., as a person as opposed to as a Jewish person or as a fair-minded person); I was not stating that Mr. Petricic’s intention was to offend any particular people, be it myself, the Jewish community, or fair-minded people anywhere in the world; and finally, I would humbly suggest that you would likely not know any better than I what was the intent of Mr. Petricic. What I stated was that his analogy was very offensive, whether he meant it to be or not. If he meant it to be offensive, then he should be disciplined for anti-Semitism. If his offence was inadvertent, then he should be disciplined for incompetence.

You agreed with me that, “There is no question that any juxtaposition of the IDF and the Islamic extremist group controlling parts of Iraq and Syria is dangerous.” However, you continue by stating that I “may have freighted his tweet with an implication that goes well beyond the plain meaning of his few words.” Finally, you say that, “Of course, tweets are severely limited. There is no room for nuance, explanation or context. Their impact depends on timeliness, insight, wit, or in this instance, juxtaposition.”

You are correct that Mr. Petricic did not explicitly state that the Jews (and occasional Gentiles) who move to Israel for the purpose of volunteering in the Israeli Defence Forces in order to protect Israel against terrorist attacks are not similar to the barbaric terrorists who join ISIS. However, the inclusion of both in the same Tweet quite obviously suggests the inference of a similarity between both. Moreover, if addressing the subject in a Tweet leaves “no room for nuance, explanation or context”, then it was completely inappropriate for Mr. Petricic to have addressed such a sensitive topic by Tweet; neither I nor anyone else would have been offended had he remained silent on the subject.

His follow-up Tweet apparently seemed to leave the CBC content that no harm had been done by his first Tweet: “Seems something in ISIS awakened desire to oppose it & defend Israel too [italics added by me].” This is also extremely offensive by the naïve tone that omits any implied reference to the incredible level of barbarity by ISIS in relation to the sum of all of its actions, be they public and televised beheadings, kidnapping of women and children, mass murders of men, rape as a weapon of terrorism, ethnic cleansing of such diverse groups as Yazidis or Christians or Kurds or Shiites or non-Orthodox Sunni, wilful destruction of many of mankind’s most precious archaeologic sites from the “cradle of civilization,” etc., etc. Mr. Petricic summarized these atrocities by “speculating” that “something in ISIS [seems to have] awakened desire to oppose it.” As much as his explicit pairing of ISIS terrorists with IDF volunteers was offensive, so was his lack of explicitness offensive when positing that there must be something about ISIS that causes people to oppose it! (Hmm, whatever could the something be that causes people to oppose ISIS?).

You ask, “Does he have an anti-Israel bias? No, of course he doesn’t. He wouldn’t be there – or for that matter anywhere else as a CBC journalist – if he did.” Surely you realize that I am not alone in perceiving an underlying anti-Israel bias in the reporting of Mr. Petricic in particular or of the CBC in general. While I do not subscribe to Twitter, I was able to see about 20 Tweets on April 23 in response to Mr. Petricic’s Tweet, all of which expressed both opposition and offence to his Tweet. My case for claiming that there exists an anti-Israel bias in the reporting of both Mr. Petricic and the CBC is not one that can be addressed with just an exchange of Emails such as we are having; frankly, as a non-journalist, I do not possess the analytic tools to defend my position. However, I do want to go on record that this is my position, one which is shared by many Jewish friends and colleagues. I am certain that you must be aware of the same criticism of the CBC that is regularly expressed by Honest Reporting Canada (https://honestreporting.ca/), with many more factual references than I am able to muster.

Putting aside general criticisms of Mr. Petricic and the CBC, I return to the subject of my original Email to you regarding Mr. Petricic’s initial and follow-up Tweets. Despite the explanations offered in your response, I continue to feel strongly that, if Mr. Petricic did not portray an underlying anti-Semitism for which he should be disciplined, then at the very least he exhibited incompetence that would be understood by reasonable people as causing offence to Jews and non-Jews who believe in the right of Israel to exist. For such incompetence, equally should he be disciplined.