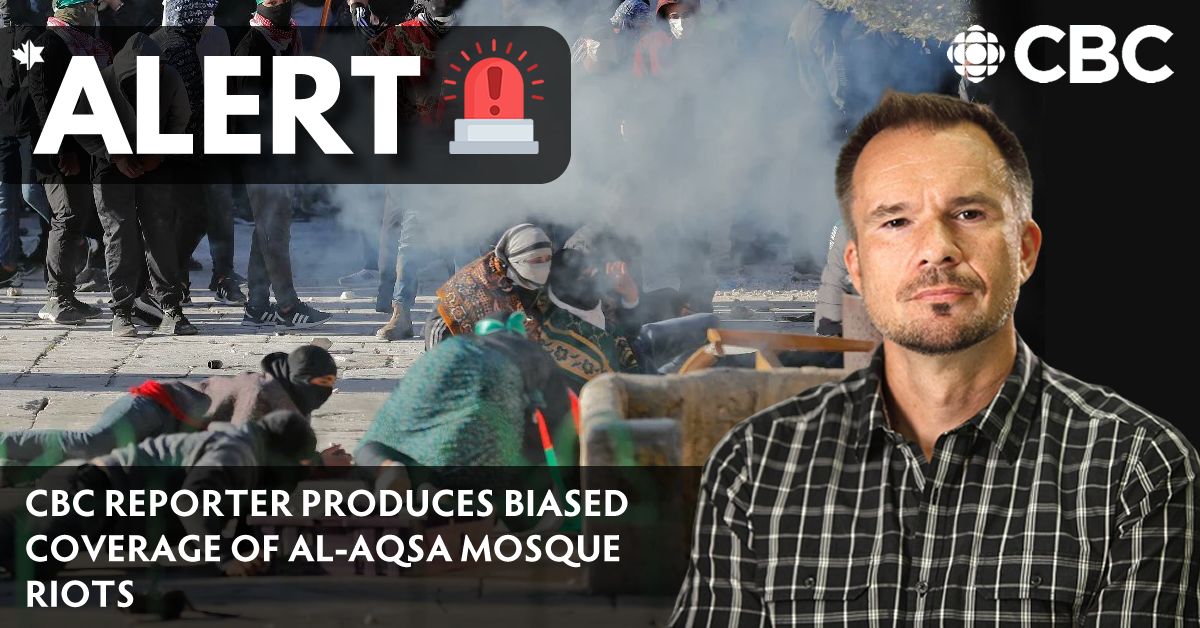 In covering the recent Palestinian-Arab riots at the Al Aqsa Mosque on April 15, CBC News journalist Saša Petricic produced two reports from Washington, one for CBC The National and another for CBC Radio, each of which featured this reporter’s opinion disguised as news and which contained misleading accounts of casualty figures in recent weeks.

To listen to Petricic’s CBC Radio report click below:

To watch Petricic’s CBC The National report, click here or below:

In introducing his reports, Petricic, the CBC’s former Middle East bureau chief, noted that the Al Aqsa Mosque is “Jerusalem’s holiest Muslim site”, and while that is true, Petricic ignored how the Temple Mount is Judaism’s holiest site and the Mosque is Islam’s third holiest site.

While Petricic reported correctly the chronology of events that saw Arab rioters barricade themselves and throw rocks at Israeli police from within the Al Aqsa Mosque which led to the Israeli response, he neglected to mention that they lobbed rocks at Jewish worshipers at the Western Wall (Kotel) below, requiring Israeli police to ascend to the Temple Mount to stop the violence by firing rubber bullets and by using riot dispersal methods in the Al Aqsa Mosque, which was being used as a staging ground to amass rocks and incendiaries to be thrown at Jewish worshipers and Israeli officers.

Instead of being politically neutral, Petricic conjured up a motive for Palestinian terrorists who have carried out dozens of terror attacks in recent weeks. He reported the following:

Petricic: “There have been weeks of confrontations in Israel and the West Bank as Palestinian militants have attacked Israelis over Israel’s continued occupation. 14 people have been killed inside Israel, as well as 25 Palestinians in the West Bank.” (CBC Radio)


Petricic: “Tensions have also been running high in Israel and the West Bank sparked by weeks of confrontations. Palestinian militants have launched attacks inside Israel over the continued occupation with 14 people left dead… Israeli forces have responded killing 15 Palestinians mourned at West Bank funerals.” (CBC National)


Importantly, Saša Petricic does not know the motives of why these Palestinian terrorists carried out their terror attacks against innocent Israeli civilians. He presented what is only his pure speculation as being fact-based, whereas what motivated each terrorist is unclear. Did they go on shooting and stabbing rampages because of the “occupation,” or was it because they’ve been incited by Hamas and/or the Palestinian Authority to hate Jews? Furthermore, some of these Palestinian terrorists may view Israel as “occupying” land per the territory in 1948, meaning that they don’t believe Israel has a right to exist at all.

With respect to the Palestinian casualties, CBCNews.ca itself notes that: “At least 25 Palestinians have been killed in the recent wave of violence, according to an Associated Press count, many of whom had carried out attacks or were involved in the clashes, but also an unarmed woman and a lawyer who appears to have been killed by mistake.”

While we credit Saša Petricic for including the views of Ilana Cowland, a Jewish school teacher into his CBC The National report, where she commented about the impact on Israeli families who lost loved ones to terrorism and who therefore cannot be at Passover Seders, but you cannot help but detect his drawing an implicit moral equivalence between Palestinians mourning terrorists killed by Israeli forces and Israeli families mourning Israeli civilians killed by Palestinian terrorists.

HonestReporting Canada has filed a complaint with CBC News bringing our concerns to our public broadcaster’s attention. Stay tuned to this page for any future updates.