It was a gruesome, premeditated and cold-blooded terror attack which targeted innocent Israeli civilians. Two Palestinian Hamas terrorists murdered four Israelis and injured more than nine in a brazen shooting attack at a Tel Aviv restaurant in the Sarona Market yesterday.

Whether in Paris, Brussels or Tel Aviv, Terror is terror and nothing justifies it.

Covering the attack yesterday, CBC’s Mideast Bureau Chief Derek Stoffel opined on his Twitter feed that the “motive” of these Palestinian terrorists is “unclear”: 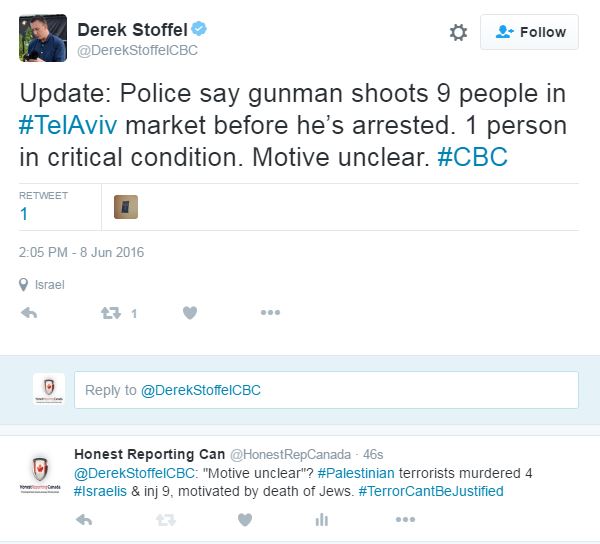 Websters Dictionary defines “motive” as “something (as a need or desire) that causes a person to act”. As we pointed out in our response per above, Hamas and Palestinian terrorists alike are motivated by the death of Israeli Jews. Terror, can never be justified.

While Hamas has claimed that the attack came in response to “unspecified Israeli ‘violations’ at the flashpoint Al-Aqsa Mosque at the Temple Mount in Jerusalem,” there is no legitimacy to this libelous claim. Israel is committed to the status quo on the Temple Mount and Hamas and other Palestinians are fanning the flames of incitement.

Ultimately though, there is no justification or “motive” for the murder of innocents. Please Tweet this message to @DerekStoffelCBC or send emails to: derek.stoffel@cbc.ca