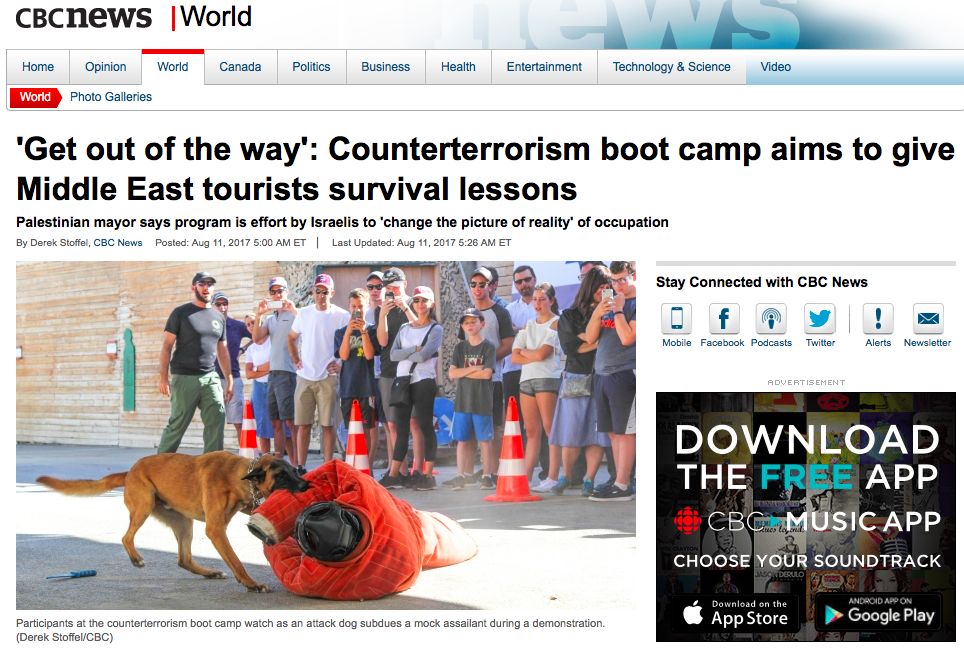 In an “analysis” report published on the CBC’s website today, Mideast correspondent Derek Stoffel implicitly drew a moral equivalence between Palestinian terror training camps that indoctrinate children to hate and murder Israelis, and Israeli boot camps which teach tourists and Israeli security guards how to defend themselves against terror attacks.

Stoffel visited a counterterrorism boot camp in Gush Etzion operated by an Israeli security company called Caliber 3, which teaches 22,000 individuals annually how to defend themselves from a terror attack.

In his report, Stoffel found it necessary to interview the mayor of the nearby Palestinian town of al-Khader named Yasser Sobih, who said that the “boot camp is an effort by Israelis to ‘change the picture of reality’ about the occupation, which has lasted five decades.” CBC also used this quote for its sub-headline. Stoffel cited the Mayor as saying (emphasis added): “Maybe they call it security… The intention of this training is not for protection. What it is intended for is the killing or humiliation of Palestinians.”

Stoffel then writes: “Sobih said he’s particularly worried about Palestinian farmers with land near the Caliber 3 facility. There have been several Palestinian attacks — some fatal — against Israelis in the Gush Etzion area in the last two years. Israeli rights groups have also documented cases where Jewish settlers are accused of attacking Palestinians.”

Therein, Stoffel equivocates alleged attacks by Jewish settlers on Palestinians, with Palestinian terror attacks against Israelis in Gush Etzion. Interestingly, though he links to a B’Tselem report entitled “Settler violence: Lack of accountability,” he fails to link to reports detailing terror attacks against Israelis. He could have mentioned that in the wave of terror since September 2015, 55 Israelis were murdered and 812 wounded in stabbing, shooting, bombing and vehicular attacks. He 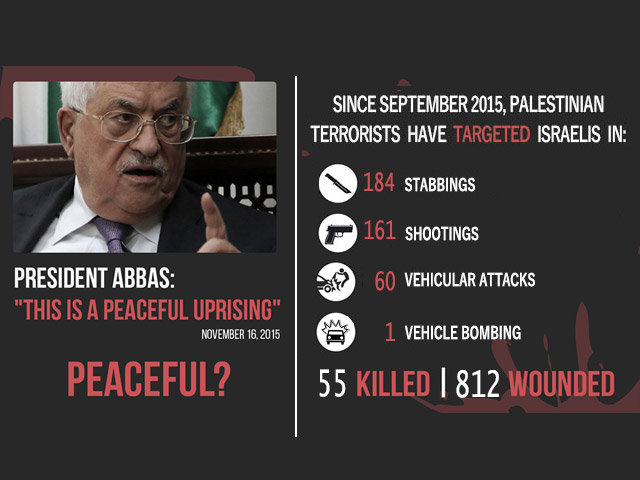 could have mentioned the following recent attacks in Gush Etzion as noted by the Israeli Ministry of Foreign Affairs:

Importantly, in July, the Reuters news agency produced a very similar report like the CBC’s, but it’s important to note that Reuters acknowledged how in the past two years, there’s been “a surge in Palestinian street attacks” while noting that the Caliber 3 facility opened in the backdrop of a “Palestinian uprising that included suicide bombings and shooting attacks”.

With respect to B’Tselem, Stoffel failed to note that the organization is well known for its strident criticisms of Israeli policy and actions and its questionable methodologies, as noted by NGO Monitor.

Stoffel then pivoted and wrote the following under the sub-headline: “Gaza training camps for kids” (emphasis added):

“There are other boot camps in the region that have stirred up controversy. The Middle East Media Research Institute (MEMRI), which monitors news reports in the region, has documented several instances where the Palestinian militant group Hamas, which controls the Gaza Strip, has 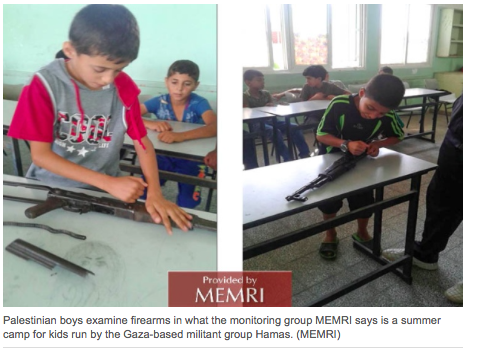 offered summer camps for children. Photos and video show boys, in some cases dressed as militants, attacking others dressed as Israeli police officers and soldiers. A video posted by MEMRI appears to show Palestinian children staging a re-enactment of the recent tensions and violence surrounding access to the al-Aqsa/Temple Mount compound in Jerusalem.”

The reality is that there wouldn’t need to be Israeli counterterrorism camps if there weren’t Palestinian terrorist camps!

HonestReporting Canada has filed a complaint with CBC editors about this report and we encourage you to do the same by sending emails to CBC News Editor-in-Chief Jennifer McGuire at:  Jennifer.McGuire@cbc.ca or send Tweets to reporter Derek Stoffel by clicking here.