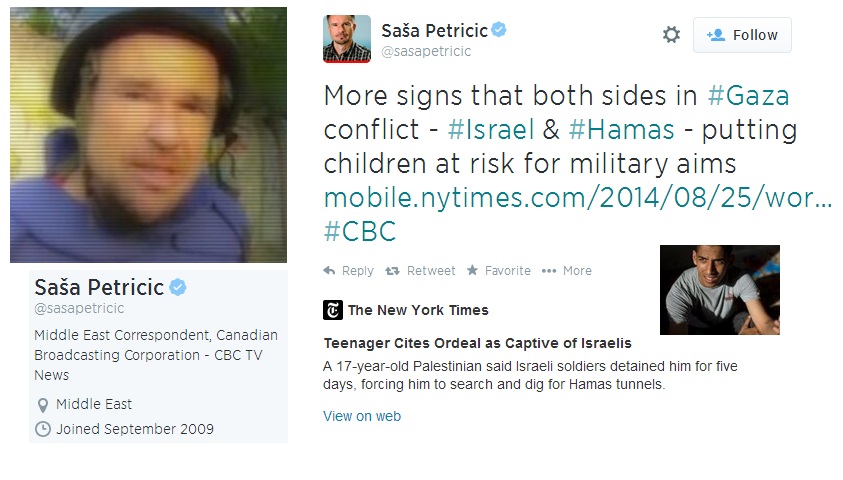 With close to 10,000 followers on Twitter, Petricic’s tweet drew a moral equivalence between Israel and Hamas, the latter who readily admitted to giving Palestinian children grenades, who dispatched teenage suicide bombers, and who hid behind children while firing one kids. Hamas also killed 160 Palestinian children in the building of their terror attack tunnels.

In his tweet, Petricic linked to a New York Times article which has come under scrutiny for being nothing more than Hamas propaganda. The Times article details a Palestinian teenager’s allegations that he was mistreated during five days of detention by Israeli authorities.

“With a byline by Fares Akram and Jodi Rudoren, the article leads off with accounts by the Palestinian youth that he was forced to sleep blindfolded, handcuffed in his underwear, and ordered to search and dig for tunnels in his village near Gaza’s eastern border.

In the second paragraph, readers are told that the 17-year-old youth said Israeli soldiers connected him with Hamas as they insulted him and Allah, and threatened to sic a dog on him.

The ordeal continues in the third paragraph, with the teenager, Ahmed Jamal Abu Raida, telling the Times in lengthy interviews that “My life was in danger.  In every second, I was going to the unknown.”

Pretty shocking, one might assume.  But does his tale hold up?

Not quite. In fact, it begins to fall apart in the fourth paragraph when the Times admits that “his assertions could not be independently corroborated.”

And then Ahmed’s father, a senior Hamas official, coyly admits that the family “forgot to take photographs documenting any abuse in its happiness over the youth’s return.” Oh, and they also “disposed of the clothing he was given upon his release,” the father acknowledges.

With its account in tatters, the Times still tries to recover and meekly adds that the case was publicized by an outfit called “Defense for Children International-Palestine.” Except that its credibility also leaves much to be desired.

“DCI-Palestine has exposed itself countless times as an agenda-driven and prejudiced organization with scant regard for the truth and a marked disinterest in Palestinian perpetrators and Israeli victims,” Israel’s military said in a statement.

But unfortunately, this Israeli rebuttal doesn’t appear until the seventh paragraph. In the meantime, readers who quickly scan headlines or only read the first two or three paragraphs are left with an unqualified impression of a Palestinian boy’s harrowing ordeal at the hands of Israeli’s military.

The damage is done; Israel has been blackened – never mind the absence of any solid evidence to underpin the article. And, of course, not an inkling in the headline that this all may be bogus. Belated cautionary qualifiers come too late. It’s all part and parcel of sleazy journalism at the service of the Times’ anti-Israel agenda.”

As the Times article lacks credibility, on what grounds can CBC reporter Sasa Petricic assert that Israel “put children at risk for military aims”? Please convey your concerns to the CBC by contacting Jack Nagler, Director of Journalistic Public Accountability and Engagement at jack.nagler@cbc.ca and/or Tweet CBC reporter Sasa Petricic at @SasaPetricic and convey your concerns.