Following HonestReporting Canada’s complaint, we take note that a subsequent CBC report by Derek Stoffel referred implemented our suggestions. Stoffel report refers to the commemoration of  “six Arab-Israelis  killed by Israel during protests against land expropriation in 1976″ and regarding Palestinian refugees, that “They came to demand to return to the homes their families lived in seventy years ago. Palestinians in Gaza, many of them refugees or their descendants,  who fled or were forced out during the war for Israel’s independence.” 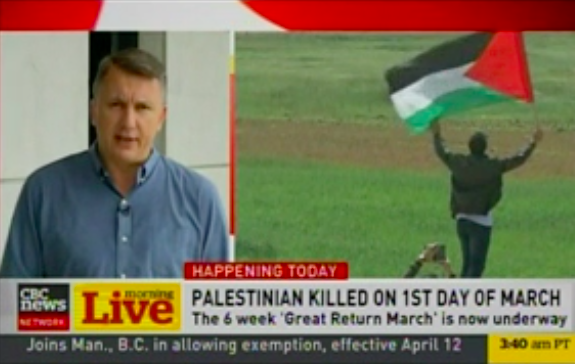 Today at 6:39am, CBC TV produced reporting on the mass protests along the Gaza border with Israel, where tens of thousands of Palestinians have gathered and many who have violently rioted at Hamas’ behest. As of this writing (11:00am EST), 12 Palestinians have been killed with over 1,000 injured.

Watch this report by clicking on this link or immediately below:

Contrary to what Mr. Stoffel reported, the six individuals killed in 1976 were Arab Israelis, not Palestinians. Furthermore, it’s false to claim that in the 1948 war that “hundreds of thousands of Palestinians were forced from their homes during the Israeli War of Independence in 1948…” It’s accurate to say that they were “displaced,” but conventional reportage dictates that journalists say that the Palestinians voluntarily fled (at the behest of Arab leaders at the time) or were forced. It’s unfair to say that all were “forced from their homes…”

Here’s how Reuters and the Associated Press reported on these matters today: (courtesy of the Globe and Mail and CTV News)

The start of the demonstration was symbolically linked to what Palestinians call “Land Day,” which commemorates the six Arab citizens of Israel killed by Israeli security forces in demonstrations in 1976 over land confiscations. The week-long Jewish holiday of Passover, when Israel heightens security, also begins on Friday. The protest is due to end on May 15, the day Palestinians call the “Nakba” or “Catastrophe”, marking the displacement of hundreds of thousands of Palestinians in the conflict surrounding the creation of Israel in 1948.”

Palestinians commemorate the date as the anniversary of their mass displacement and uprooting during the 1948 Mideast war over Israel’s creation. The vast majority of Gaza residents are descendants of Palestinians who fled or were driven from communities in what is now Israel.”

In light of this information, HonestReporting Canada asked that CBC News take immediate corrective action to set the record straight.

With respect to the clashes along the Gaza border, it’s instructive to note that the IDF says that its soldiers had shot at the “main instigators.” The IDF said some “protesters” were lighting tires on fire and were throwing Molotov cocktails and rocks at IDF troops on the other side of the border. Meanwhile, the Times of Israel reports that “The army said the organizers of the protests were deliberately trying to place civilians in harm’s way, and cited an incident in which it said a seven-year-old girl was sent to the security fence in an apparent cynical attempt to draw Israeli fire, but was spotted by troops who realized what was happening and ensured she was not hurt.”

Though this is a developing story, CBC’s coverage to date – which has been conducted largely by Mideast bureau chief Derek Stoffel –  has failed to report that Israel claims that two of the Palestinian casualties noted above were Hamas commandoes who fired at IDF troops at the border and who were killed in return fire. As well, on March 29, CBC The National (scroll to the 42.38 minute mark) reported on the death of a Palestinian farmer near the Israeli border with Gaza, but did not mention that Israel feared that the Palestinian was placing an  improvised explosive device near the security fence. Stoffel’s March 30 report per above on CBC TV only noted that the “Israelis say that the two men were approaching the border fence and that’s why they shot an artillery shell into the Gaza Strip.”

Stoffel also reported throughout the day on radio/tv about the Palestinian “right of return” without mentioning that it is a demographic ticking bomb that would see the Jewish state replaced thanks to the influx of millions of Palestinian refugees.

Stay tuned to this page for further updates. HonestReporting Canada is vigilantly monitoring and engaging with the Canadian media to ensure that these matters are reported accurately, fairly and with balance.