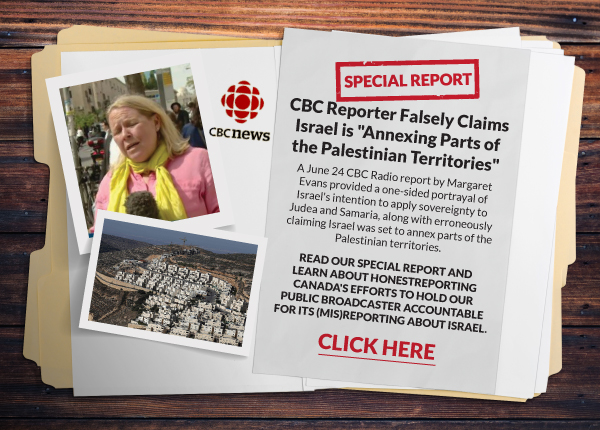 With Israel’s pending decision to apply sovereignty to Judea and Samaria, Canadian media outlets devoted considerable coverage, much of it was misleading and lacked context, while some reports contained outright falsehoods.

Case in point, on June 24, CBC Radio’s flagship World at Six program aired a feature-length segment by former Mideast Bureau Chief, Margaret Evans, which was replete with errors and which lacked vital context about Israel’s plans.

To listen to the CBC report click here or on the image below:

Israel is facing heavy diplomatic over its plan to start annexing parts of the Palestinian territories in the occupied west bank. Something it may start doing as early as next week. Today, the United Nations Secretary General condemned the proposal, so did more than 1,000 prominent lawmakers in Europe. Much of the world regards the land as illegally occupied and annexation could further destabilize the Mideast. Margaret Evans reports.”

As is commonly known, the status of the territories (which Israel regards as Judea and Samaria) is in dispute and the Palestinians have never had sovereignty over these areas. For this report to claim that Israel is making a de facto land grab of sovereign Palestinian territory is without foundation.

Secondly, while indeed much of the world regards Israel’s presence as “illegal”, Israel strenuously disputes this and Ms. Evans’s report should have acknowledged that. Secondly, the United States (the most important nation in the world arguably on this file) no longer views the settlements as being illegal, a fact omitted by Ms. Evans.

While Israel’s plans to apply sovereignty to Judea, Samaria and the Jordan Valley are divisive, the Jewish state’s claims must be acknowledged by the CBC. Put simply, Israel plans to make the region Israel proper and apply Israeli law to the Jordan Valley and 30% of Area C territory per the Oslo Accords of Judea and Samaria (“west bank”) per the Trump peace plan and consistent with past U.S. peace proposals that have long understood that Israel will retain these areas in a final peace accord.

Israel says international law enshrines its rights to these lands, while citing pressing security concerns such as the need for defensible borders and biblical, historical and political connections to the land. Ms. Evans altogether failed to include this vital context. Importantly, a nation cannot “annex” land which it has sovereign claims to.

Ms. Evans quoted and cited scores of individuals who oppose Israel’s sovereignty application. She noted that 1,000 European lawmakers condemned the plan, as did UN Chief Antonio Guterres, past and present Israeli defence and intelligence commanders and Hugh Lovett, a Middle East expert with the European Council on Foreign Relations. Ms. Evans altogether failed to quote or even cite one supporter of the plan, whether Israeli or elsewhere. As such, the report was seriously imbalanced. By way of example, Ms. Evans could have mentioned that top Republican senators support the Israeli effort, as do top congressional GOP leaders. She could have quoted many experts who are supportive of the sovereignty plan, like international law expert Professor Eugene Kontorovich or Avi Bell, an Israeli Professor of Law at the University of San Diego School of Law and at Bar-Ilan University’s Faculty of Law.

As a result of this report lacking balance, being unfair and containing errors, HonestReporting Canada filed a complaint with senior CBC executives calling for corrective action. Stay tuned to this page for future updates.

Subsequent to our complaint sent to CBC and its reporter on June 25, CBC reporter Margaret Evans produced two reports also on the topic for CBC The National on July 1 and on the CBC’s website on July 2.

It’s noteworthy that in her CBC website analysis piece and on her TV report on the National, Ms. Evans refers to Netanyahu’s pledging to “extend Israeli sovereignty” and for quoting Israeli PM Netanyahu saying that the plan simply “recognizes reality on the ground.”

Applying Israeli law to areas of Judea and Samaria [the Biblical names used by the Israeli government for the West Bank] that will remain part of Israel in any future peace deal will not set back the cause of peace… It will advance peace.” Israeli Prime Minister Netanyahu.

While Evans says that “The settlements are illegal under international law, having been built on land captured and occupied in 1967…” she does now acknowledge what we called for in our complaint, that “Israel doesn’t accept that, saying the territory is disputed.”

While HonestReporting Canada doesn’t take a position on Israel’s planning, it’s noteworthy that Ms. Evans acceded to our request to interview and quote sources who support the Israeli application of sovereignty to Judea and Samaria, subsequent to her 1-sided CBC Radio report. Aside from quoting Israeli PM Netanyahu, in her CBC analysis article, Ms. Evans quoted Prof. Efraim Inbar, president of the Jerusalem Institute for Strategic Studies saying that “Israel should seize this moment to apply its law to the Jordan Valley and to the environs of Jerusalem in order to guarantee Israeli security for generations.”

We hope that our sensitizing the CBC and Ms. Evans about the issues at hand will serve to prevent future distorted coverage.