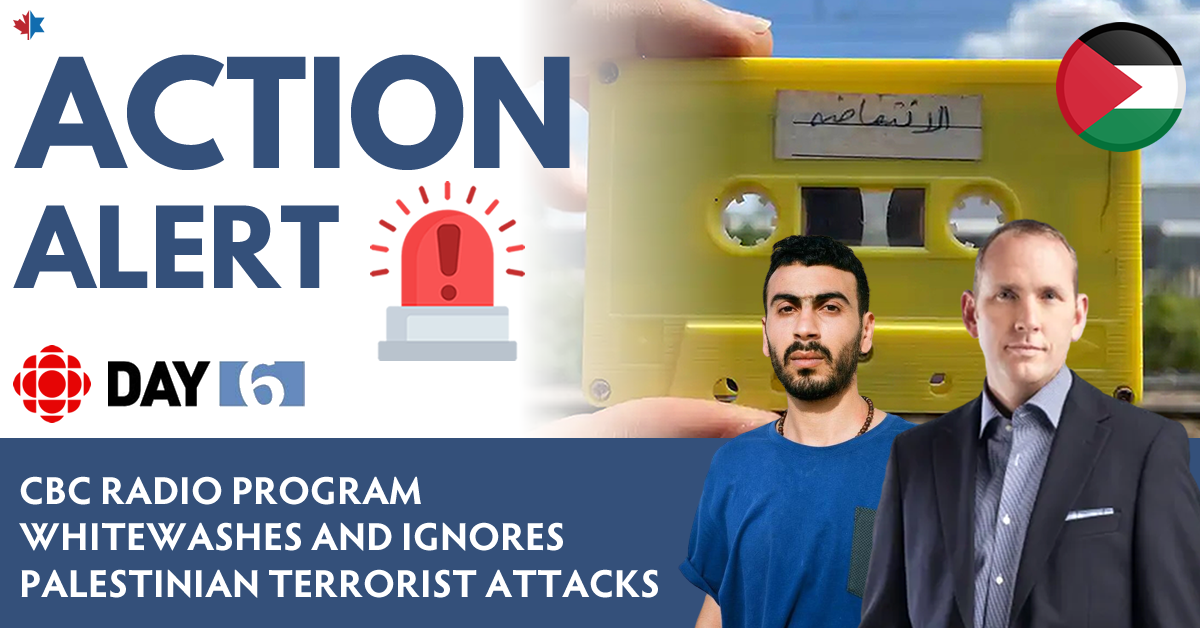 Over the last two weeks, 11 innocent people in Israel have been murdered in terrorist attacks. The attacks have included a car-ramming and stabbing spree in the southern Israeli city of Beersheva which killed four, a shooting in the port city of Hadera saw two murdered, and a Palestinian terrorist fired a machine gun at passersby, murdering five of them, in the city of Bnei Brak.

Listen to the almost 10-minute report by clicking here.

Even before the interview began, Armstrong introduced the segment with a significant whitewashing of recent events. He started by telling listeners that two Palestinians were recently killed in the city of Jenin as a “new wave of violence hits the region,” and that the topic was timelier than ever. But not once did Armstrong mention the three recent terror attacks, or the 11 people in Israel murdered by Arab terrorists. All listeners were told by Armstrong were Israeli claims that (emphasis added) “Israel targeted what it said were militant networks involved in a series of deadly attacks in Israel.” Nor did Armstrong give any context to the two Palestinians killed in Jenin, such as that they were engaged in a firefight with Israeli soldiers, and that troops had entered Jenin to search for specific suspects related to the recent attacks in Israel.

Rather, listeners were given the impression that two presumably innocent Palestinians “kids” were killed in Jenin with no apparent rationale, and that Israel acted seemingly unprovoked.

In the early days of the pandemic, actor @MominSwaitat found himself in a record store in Jenin in the West Bank with thousands of long-forgotten music tapes.

Israel’s security concerns were later vindicated. Only two days later, three Palestinian terrorists from Islamic Jihad were killed in an Israeli raid in Jenin who were discovered by the IDF to be “ticking time bombs” en route to a planned mass casualty terrorist attack in Israel.

During the interview, Swaitat discussed his discovery of the “Intifada” music in 2020, and its significance to him.

“I felt very privileged…and connected to my heritage and my culture through music,” Swaitat told Armstrong.

But to call the songs, notably Intifada by Riad Awwad, an ode to heritage and culture is a remarkable obscuring of the truth and glorification of the Intifada.

In truth, Awwad’s song, recorded during the first Palestinian Intifada (uprising) against Israel was “part instruction manual for revolution” which was “calling for resistance” against Israel. It was for this very reason that Israel seized much of Awwad’s music in the 1980’s, recognizing its value as a tool for inciting violence. In the parlance of the Arab-Israeli conflict, “resistance” is a Palestinian euphemism for terrorism. CBC failed to provide any context about how the “Intifadas” saw over 1,000 Israelis murdered, and several thousand maimed, in suicide bombings, shooting rampages, and stabbing attacks.

In his interview, Armstrong offered only the weakest of challenges, asking Swaitat if the music had the potential to incite violence. In his answer, Swaitat gave a favourite anti-Israel reply: ignoring terrorist attacks against Israel, minimizing Israeli security concerns, and launching into a non-sequitur accusing Israel of “demolishing houses and bombing houses.”

Murdering civilians, by shooting them and stabbing them at random, is terrorism. In contrast, seizing music being used to incite violence and murder does not constitute terrorism, but in fact is the very opposite – helping to save lives.

Swaitat then implied that rocks can’t kill or injure and downplayed rock throwing as harmless and purely symbolic. This statement was a remarkable suppression of the truth. Tell that to Puah Palmer, the mother of the late 1-year-old Yonatan Palmer and widow to her husband Asher, who on Sept 23, 2011, were killed when their car was struck by stones and overturned on Route 60 near Hebron.

This segment of Day 6 was problematic for a number of reasons, including the host’s largely uncritical accepting of the guest’s anti-Israel claims and the widespread minimization of the incitement for violence in the “Intifada” music.

But perhaps worst of all was the complete lack of any mention whatsoever of the recent terrorist attacks against Israel, which took nearly a dozen innocent lives. Failing to give this absolutely critical context is not only a failure of ethical journalism, but a moral failure. Israel’s military entered Jenin to find those responsible for murdering innocent people, and instead of being given an accurate portrayal of what took place, listeners to CBC’s Day 6 segment instead heard a mishmash of anti-Israel propaganda, whitewashing of Palestinian terrorism, and the censoring of Palestinian violence.

HonestReporting Canada has filed a complaint directly with CBC News and we encourage you to do the same. Please send firm, but polite complaints, to CBC’s Editor-in-Chief, Brodie Fenlon at: Brodie.Fenlon@cbc.ca. Send Tweets to @CBCDay6 and @armstrongcbc.