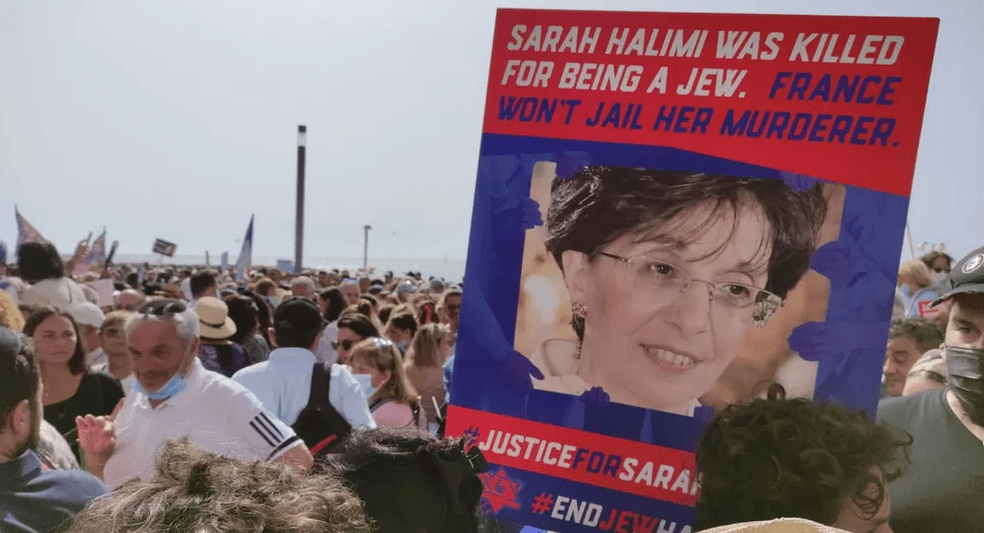 On April 4, 2017, Halimi was murdered in her apartment by Traoré, an immigrant from Mali, who brutally assaulted her and threw her out the window in an unprovoked attack. Halimi was the only Jewish resident in her apartment building, and when her assailant murdered her, he allegedly shouted “Allahu Akbar” and “I killed the Satan,” leading to the widespread conclusion that Halimi’s murder was driven by antisemitic motivations.

In the wake of this ruling, solidarity rallies were held worldwide, including in Canada. Tens of thousands of people turned out at a rally in Paris calling for Justice For Sarah.

Despite this context which was widely known, CBC’s Radio’s initial reporting on April 25 of these rallies omitted mentioning the antisemitic nature and motivations of this attack in its report.

At about 7:00pm ET, CBC Radio aired the following report, listen by clicking here or on the media player immediately below:

Here’s a transcript of the report:

Several thousand people gathered outside the Eiffel Tower today denouncing a controversial ruling upheld by France’s highest court. The ruling involved the murder case from 2017. 65-year-old Sarah Halimi was severely beaten and thrown from her third floor balcony by her neighbour. The court ruled that the man, a heavy cannabis user, was under a delirious state and so he was not fit for trial. Instead, he was sent to a psychiatric hospital. Under French law, people cannot be held criminally responsible for actions committed while suffering from psychiatric disorder. Protestors and elected officials are calling for the law to be changed and for Halimi’s murderer to appear before court. France’s Ministry of Justice has since announced a bill that would fill a legal vacuum regarding the consequences of the voluntary use of drugs.”

Many of our subscribers reached out to HonestReporting Canada expressing their concern that this report failed to mention that Halimi was targeted solely because she was Jewish and that this was an antisemitic attack.

CBC, to its credit, broadcast an improved version of this report a couple hours later which acknowledged the antisemitic nature of the attack. Listen by clicking here or on the media player immediately below:

Here’s a transcript of that report:

Finally, thousands gathered at the Eiffel Tower in Paris today after France’s highest court ruled that a man who killed a Jewish woman was not criminally responsible for his actions. They are calling the ruling an act of antisemitism, members of the crowd carried signs that read “Jewish lives matter!” The man in question severely beat a 65-year-old woman, Sarah Halimi and threw her from the balcony of her Paris apartment in 2017. The court ruled he was unfit for a trial because he was high on cannabis at the time of the attack. Today, France’s Ministry of Justice announced a bill regarding criminal responsibility in response to the outrage.”

It was highly objectionable that CBC Radio’s initial report failed to acknowledge the antisemitic nature of this attack and therefore sanitized the hate-motivated murder of Sarah Halimi. That said, we appreciate that the CBC’s follow up report did recognize that Halimi was a “Jewish woman” and that protestors regarded the ruling as “an act of antisemitism” and the attack tacitly as a hate crime against Jews. Trouble is, many people who only heard the CBC’s initial report were deprived of knowing that Halimi’s murderer was motivated by Jew hatred. We’ve communicated these concerns to the CBC directly.