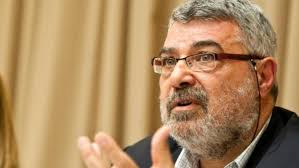 On July 28, CBC Radio’s As It Happens news program interviewed Rami Khouri, Professor of Journalism at the American University in Beirut, on how “Palestinians return(ed) to East Jerusalem’s Al-Aqsa Mosque after Israeli authorities agree to remove security restrictions they’d imposed on the site.”

When commenting on the killing of two Israeli police officers on the Temple Mount, in a terror attack carried out by three Arab-Israelis several weeks ago, Khouri seemingly justified this terror attack by excusing and explaining that the attack occurred because “people were killed because there’s an occupation”. Here’s the exchange with the CBC’s radio host:

CBC Host: “Why was it so controversial to have metal detectors when you’re talking about a scene where people were killed?”

Khoury: “People were killed because there’s an occupation and there’s people killing each other all the time. There’s a war going on.”

CBC Host: “I appreciate that, but I want to talk about the specifics of what’s happening at this site. Isn’t it important to keep it safe and secure?”

Khoury: “Absolutely and it should be safe for everybody, but it’s also a situation where any change in the status quo that has existed in the last 20 years since the Jordanians, the Palestinians and the Israelis reached an agreement on how the site should be managed, which is essentially saying that the Palestinian local religious leaders run Al Aqsa…”

Khouri later went on to claim that there were “mass civil peace protests by Palestinians” but failed to acknowledge the violent riots that took place where molotov cocktails and rocks  (deadly weapons) were thrown at Israeli forces.

Khouri is regularly quoted by Canadian and international media outlets and regarded as a pragmatist. This interview proves to the contrary. Listen to it in full below: