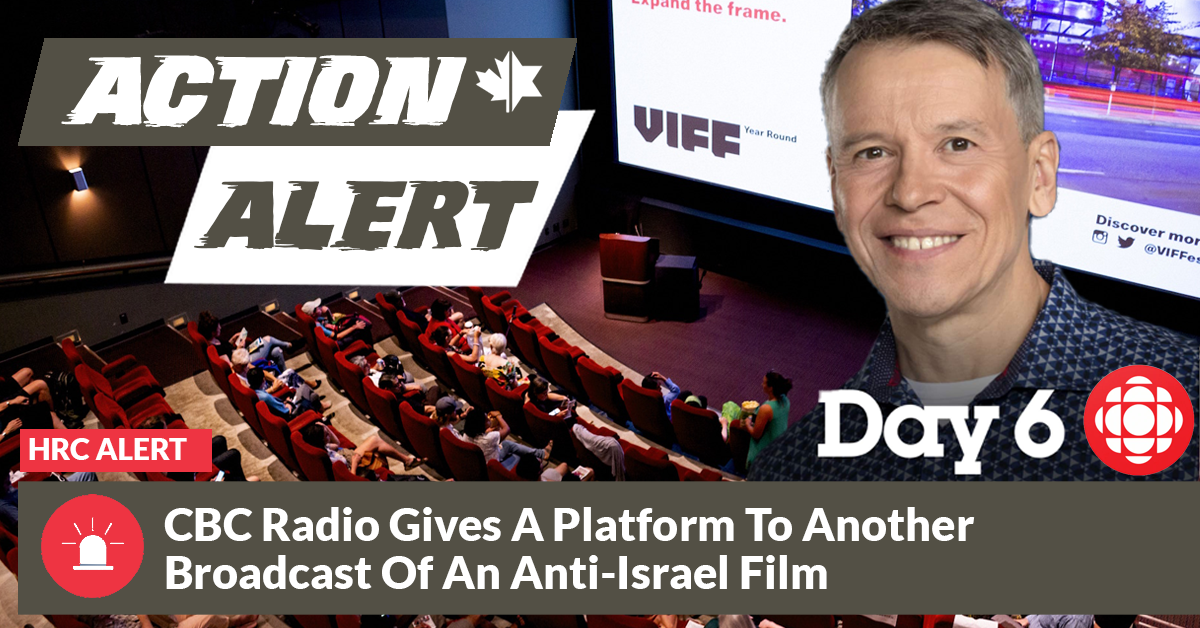 The world is a vast space with more than eight billion inhabitants spread across more than 200 countries and living on six continents.

But it seems that in some newsrooms and CBC News, the actions – real or imagined – of the tiny State of Israel are what should garner all the attention.

In the January 31, 2022 edition of The Current, a CBC Radio program, host Matt Galloway featured a lengthy discussion with multiple guests about an Israeli documentary film, Tantura, which covered an alleged Israeli massacre of Arabs in 1948.

The problematic segment was featured in an HonestReporting Canada alert published at the time.

Now, just a few months later, CBC Radio’s Day 6 program has given a platform to yet another broadcast of the exact same documentary film. But the issue with this latest broadcast is not only the CBC’s seeming infatuation with this anti-Israel documentary, but with the content of the interview itself.

In the segment, host Brent Bambury interviews Alon Schwarz, the creator of the film Tantura, which is slated to be shown at the upcoming Vancouver Film Festival.

During the course of the interview, Schwarz depicts Israel’s founding as an endeavour built on Palestinian suffering, telling his host that the story that Israelis have told themselves is that “the Palestinians that were here just ran away by themselves and were not encouraged to do this and were not violently kicked out and were not ethnically cleansed,” adding that “The real story is that there was a war here, and during that war, a pretty systematic deportation, a violent deportation of many Palestinian Arabs happened.”

In his retelling of Israel’s rebirth in 1948, Schwarz gives listeners an extremely misleading and one-sided perspective of what took place. During that War of Independence, there was no doubt suffering and ugliness, as takes place in any armed conflict, but to depict Israel as the aggressor is to turn history on its head.

Immediately after the Jewish State declared independence from the United Kingdom on May 14, 1948, war was declared on it by surrounding Arab states, who sought to wipe out the nascent Jewish country.

Israel, with its indefensible borders, was not expected to survive the Arab onslaught, and as a result, influential Arab leaders aggressively demanded the immediate evacuation of Arab residents of Israel so as to ease the armed attacks on the Jewish State and to prevent their harm from marauding Arab armies.

Israeli historian Benny Morris has noted that even as early as 1947, “Arab officers ordered the complete evacuation of specific villages in certain areas, lest their inhabitants ‘treacherously’ acquiesce in Israeli rule or hamper Arab military deployments,” stating that “There can be no exaggerating the importance of these early Arab-initiated evacuations in the demoralization, and eventual exodus, of the remaining rural and urban populations.”

Simply put, it is false to claim that there is evidence of a “systematic deportation” or ethnic cleansing of Palestinian-Arabs in Israel at the hands of Israel during its founding.

According to Schwarz, the purpose of making the film Tantura was to tell the “hidden narrative” regarding Israel’s founding, and in his conversation with Bambury, he boasts that his film was endorsed by Mahmoud Abbas, the President of the Palestinian Authority, and that it was “shown in Ramallah and was sold for distribution in Palestine.”

Schwarz, who alleges that Israel is guilty of widespread ethnic cleansing of Arabs, should hardly be surprised that his film is able to be screened in Ramallah, the administrative capital of the Palestinian Authority, of has been praised by Mahmoud Abbas, its effective dictator.

Bambury, who failed to challenge Schwarz on any of his claims throughout the interview, including his false statements about Israel’s “occupation” and “apartheid,” even at one point obliquely shared how Teddy Katz, an Israeli interview subject who alleged that a massacre in Tantura took place, said Schwarz would be “hunted down” for daring to make the film, a strange statement given that the Israeli government even helped finance the film, as Schwarz acknowledged in his January 2022 interview with Matt Galloway.

This latest broadcast is only the latest in a string of extremely narrow anti-Israel content published by Canada’s public broadcaster. The CBC’s repeated coverage of anti-Israel claims was not lost on the broadcaster’s Ombudsman, who, when recently writing about a number of CBC News articles covering the pushback from anti-Israel activists following Vancouver City Council’s vote recognizing the IHRA definition of antisemitism, stated that there was a “journalistic issue” about how much “judgment CBC employs when deciding how much attention to pay” to such stories.

Meanwhile, in April 2022, CBC Radio’s Day 6 program saw guest host Peter Armstrong interview Mo’min Swaitat, a London-based actor and producer, about Swaitat’s digitizing of Palestinian music, much of it from the 1980s. While some of the music was notable for its use in inciting Palestinian violence against Israel, the CBC interview gave virtually no reference to this important context, which spurred an HonestReporting Canada complaint at the time. The CBC’s Ombudsman subsequently validated HRC’s concerns, calling the segment “flawed” for its failure to share with listeners the content of the anti-Israel music.

CBC Radio’s coverage of this anti-Israel film is not only superfluous, it was profoundly one-sided and the host failed to perform one the most basic roles of interviewing, namely offering thoughtful critique to his guest.