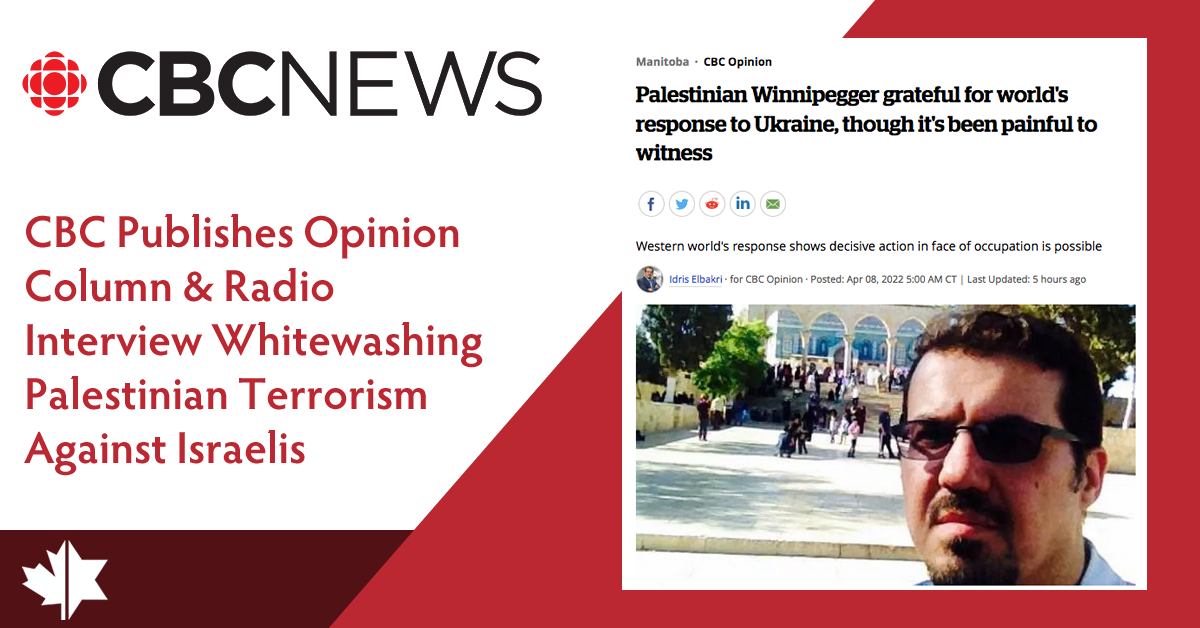 As the conflict in Ukraine rages on, it has become tempting for some commentators to attempt to shoehorn their own anti-Israel politics into the Russo-Ukrainian War. Regrettably, while this tactic is repeatedly tried, the biggest victim continues to be the truth.

In a recent April 8 column for CBC Opinion entitled: “Palestinian Winnipegger grateful for world’s response to Ukraine, though it’s been painful to witness,” author Idris Elbakri attempted to draw parallels between Ukraine and the Palestinians, and to portray Israel as a menacing figure.

“The vocabulary used to refer to Ukraine and its people’s heroic efforts to defend it – resistance, sanctions, Molotov cocktails, sacrificing oneself for country — were all familiar to us. They form part of the vocabulary of a people long steeped in resistance and protest,” Elbakri wrote.

Despite this attempt to link Ukraine and the Palestinians, the circumstances between the two could not be more different.

Ukraine is a sovereign state being invaded by a separate sovereign state, Russia, and in the face of the invasion, Ukrainians are fighting against an armed force actively involved in combat.

Conversely, what Elbakri calls “resistance” is nothing more than a whitewashed version of reality. Israel is a sovereign state, and despite repeated offers on Israel’s part to create a Palestinian state, Palestinian leadership has refused the offer, and instead has continued to deny Israel’s right to exist, incite hatred against Israel and Jews, and incentivizes and rewards Palestinian terrorists.

The results are as predictable as they are tragic.

In recent weeks, 14 innocent people have died in Israel at the hands of Palestinian and Arab terrorists, including shooting and stabbing attacks. None of these people are involved in active combat in any way.

Yet Elbakri would have readers believe that the fight against an invasion force is tantamount to Palestinians stabbing and shooting innocent Israeli civilians in the street for no reason other than that they are Israeli or Jewish.

Elbakri later writes that when “Israel shelled Gaza last year, and many times before, Canada affirmed Israel’s right to defend itself, not the right of the Palestinians to resist their occupation and colonization, or even to defend themselves.”

Once again, this is a wholesale inversion of the truth. During the May 2021 conflict, Hamas, the Gaza-based Islamist terrorist group, fired an estimated 4,000 rockets into population targets within Israel, murdering a dozen civilians and injuring scores more in their indiscriminate attacks. Not only is there no justification for this murder of civilians, but the claim that the Palestinians were resisting “occupation and colonization” is fiction. Not since the summer of 2005, when Israel forcibly withdrew thousands of its own civilians and soldiers, has Gaza been under any semblance of Israeli control.

As for Elbakri’s nonsensical claim of Israeli “colonization” of Palestinians, it is an allegation so absurd it does not warrant legitimate consideration. For three thousand years, Jews have lived continuously in their ancestral homeland, and there is copious archaeological proof to this effect. In 1948, after nearly two millennia under foreign occupation – including the Romans, Byzantines, and Saracen Arabs – the Jews finally achieved their independence once again. Israel, as the nation-state of the Jews, represents the polar opposite of a colonial power, but rather the indigenous people who have never left their homeland, and who continue to live there.

On the morning of April 8, CBC Information Radio, hosted by Marcy Markusa, interviewed Elbakri based on his column where he continued to sanitize Palestinian terrorism in an interview about “people who have family history in other war torn and occupied countries,” saying Elbakri is “a Palestinian Manitoban whose family is from Palestine.”

Markusa (pictured right) failed to challenge any of Elbakri’s false assertions about how his people are “occupied” by an “oppressive” “foreign army”. His justification of Palestinian “resistance,” a code-word for terrorism, which he described as being about people “willing to sacrifice oneself for one’s country,” went completely unchallenged by CBC Host Markusa. 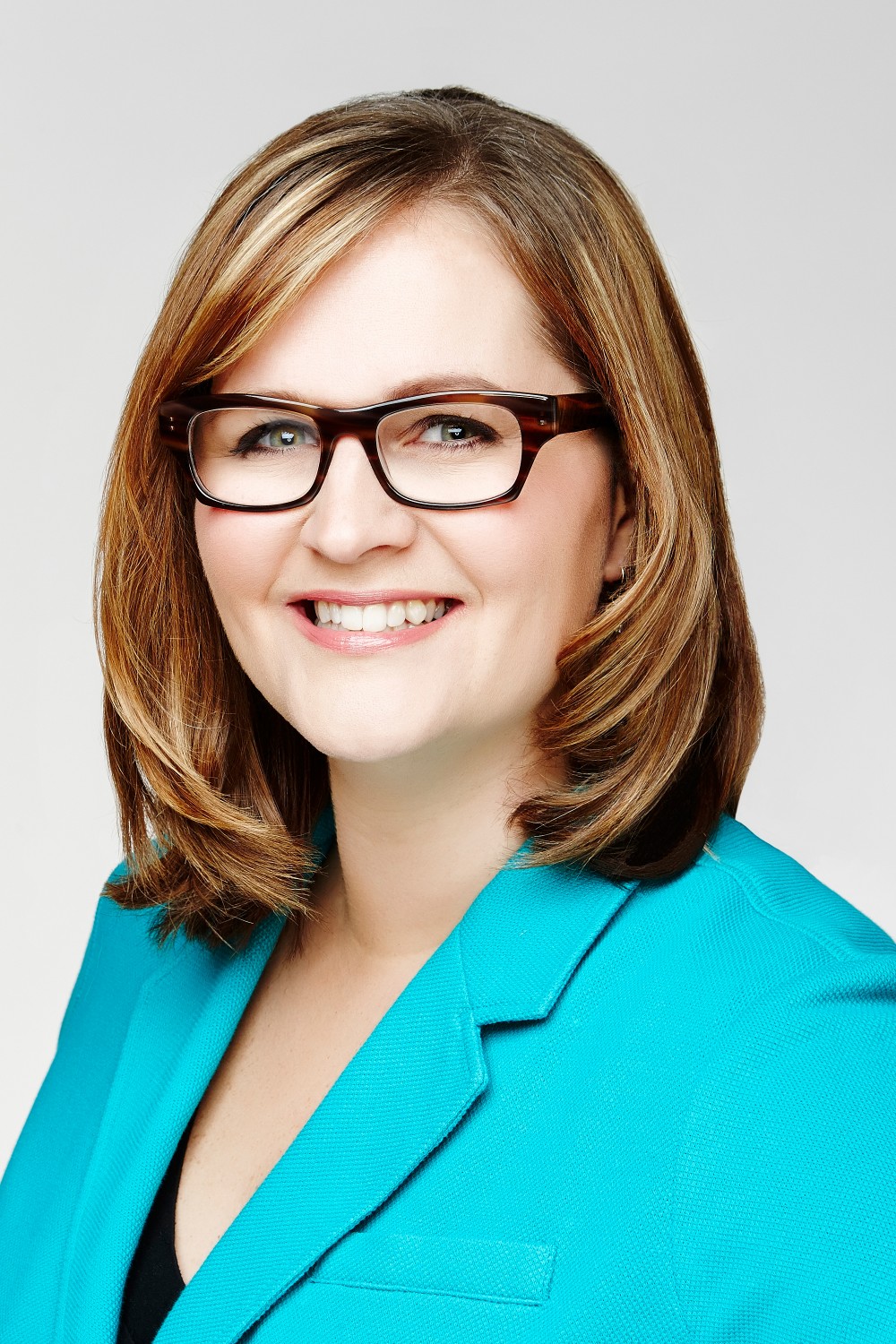 The good news for Palestinians is that despite the Jewish people’s millennia of history in Israel, the Jewish State has continued to extend its hand in peace to the Palestinians. Even before Israel achieved independence, the Jewish delegates to the United Nations in 1947 voted in favour of a separate Arab state, alongside the Jewish one.

Today, despite the ongoing incitement from both Hamas and the Palestinian Authority, erasing the Jewish people’s ancient history and their legitimate claims to their homeland, Israel’s hand continues to be extended.

This is the 2nd time that CBC News has granted Elbakri opinion space where he spread outright falsehoods.  As long as the Palestinian narrative that he asserts continues to be one of revisionist history and the whitewashing of murderous Palestinian terrorism, they will continue to deny themselves a state. In the past, the Palestinians could at least look to their Arab compatriots in the region for support and solidarity against Israel, but that too is changing. In recent years, a plethora of Arab states, from Egypt to Morocco, Bahrain to the United Arab Emirates (UAE), have come to recognize that Israel has a right to exist, and the only path forward is one of cooperation.

The best way to benefit Palestinians is to acknowledge reality, make peace with Israel, and disavow terrorism. Doing otherwise will only harm Palestinians. Elbakri and CBC would do well to recognize this.

HonestReporting Canada has communicated our concerns directly to CBC News and we encourage you to do the same by sending complaints to CBC Opinion and to John Bertrand, Managing Director of CBC Manitoba and the Information Radio program all at: opinion@cbc.ca, john.bertrand@cbc.ca, and radio893@cbc.ca. Please tweet to @CBCManitoba, @CBCJohnBertrand, @CBCRadio and @CBCMarcy.