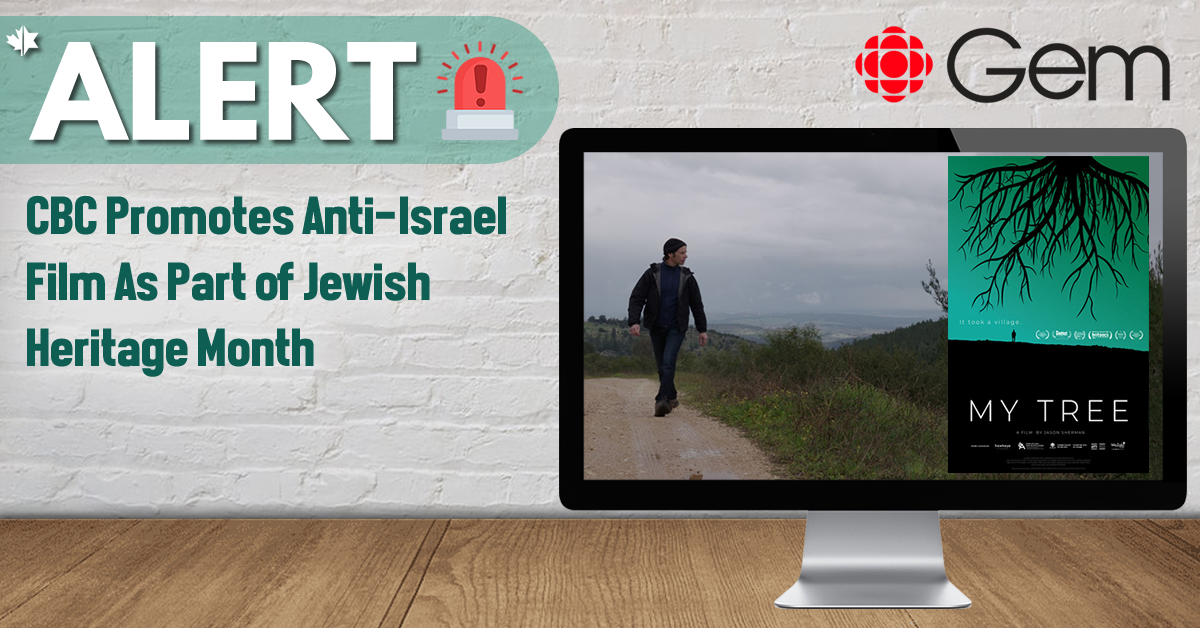 Established in 2018 by the Parliament of Canada, the month of May became Jewish Heritage Month throughout Canada.

Intended as a means to recognize the many contributions Canada’s 400,000+ Jews make to their country, Jewish Heritage Month adds an important voice to Canada’s diverse tapestry and aims to “… remember, celebrate and educate future generations about the inspirational role that Jewish Canadians have played and continue to play in communities across the country,” according to the Canadian Jewish Heritage Month Act.

One of the new films, My Tree, by filmmaker Jason Sherman, chronicles his search for a tree planted in Israel in honour of his Bar Mitzvah in 1975. CBC describes the film as follows (emphasis added): “A Canadian searches for the tree that was planted in his name in Israel many years earlier. When he discovers that it stands on the remains of an Arab village, he is forced to question his own culpability.”

But My Tree is much more than a simple quest by a Canadian Jew into his heritage; the film is a harsh critique of both the Jewish National Fund (JNF), the organization which spearheaded tree planting in Israel, and Israel’s alleged crimes against Palestinians.

You can watch the documentary in full by clicking here.

In My Tree, Sherman begins with a history lesson in Zionism, describing how early Zionist leaders, seeing widespread antisemitic persecution in Europe, sought a Jewish homeland. In his narration, Sherman argues they “looked around and said, ‘How about Palestine.’” After all, Sherman continues, “Once upon a time, Jews lived around these parts.”

To describe Jews as having once “lived around these parts” is a gross misrepresentation of the facts. For three thousand years, Jews have had a constant habitation in the land of Israel, despite repeated invasions that exiled part of their population to foreign lands. Furthermore, even during the nascent birth of modern Zionism in the late 1800s, Jewish communities existed in many parts of Israel, including Jerusalem.

Throughout the film, Sherman speaks to a number of interviewees who portray Israel in a harshly negative light, including Sherman’s cousin Susan and her husband Dov, who live in Israel. “There’s been apartheid, separate rules for Arabs, separate rules for Jews,” Susan tells Sherman in the film.

This is utterly false. As has been pointed out by HonestReporting Canada in the past, in Israel, all citizens – regardless of their ethnicity or religion – enjoy equal rights under the law. Despite Susan’s false claims, Sherman does not attempt to challenge her allegations.

Later, Sherman speaks to Eitan Bronstein Aparicio, a co-founder of De-Colonizer, which refers to Israel on its website as a “colonialist and racist regime” and who is in the process of “decolonizing his identity as an Israeli.”

Bronstein Aparicio tells Sherman that Israel planted trees in Israel in an attempt to “hide war crimes,” and that the existence of former Arab villages should make Israelis “question your very foundation.”

The anti-Israel messages continue throughout My Tree.

Sherman also speaks with anti-Israel activist Uri Davis, co-author of the book “The Jewish National Fund,” whose website falsely refers to Israel as a “settler-colonial state.”

In his conversation with Sherman, Davis falsely alleges that Israel “ethnically cleansed” Arabs during Israel’s War of Independence from 1948 to 1949.

While pre-state Israel was indeed home to hundreds of thousands of Arabs – many, not all, of whom left upon commencement of the Arab invasion of Israel in 1948 – they were not “ethnically cleansed.” Rather, they left for a combination of reasons, ranging from threats from Arab leaders to the belief that they would soon return after the nascent Jewish State was destroyed, as was expected.

Sherman’s film is problematic enough in its misleading depictions of Israel, and widespread interviews with anti-Israel activists.

The selection of My Tree by CBC Gem to commemorate Jewish Heritage Month is more than simply an unfortunate choice of an anti-Israel film. Rather, My Tree tragically helps to delegitimize the Jewish State, and deny the Jewish people’s history in their ancestral homeland, making it an appalling choice for our publicly-funded national broadcaster to give a platform to for Jewish Heritage Month.

Please Take Action Now by reaching out to CBC Gem to — politely, but firmly — condemn the CBC for promoting and giving a platform to an anti-Israel film as part of Jewish Heritage Month. Send emails to: cbcpr@cbc.ca.