Israel Is An Imperfect Country, But A Vibrant...
Why Are Anti-Israel Activists So Afraid of The...
McGill Tribune Publishes Op-Ed Calling for a Boycott...
Ontario Arabic Paper’s Editor Downplays Holocaust; Meshwar Describes...
How the War in Ukraine is Having a...
Toronto Star Columnist Shree Paradkar Wrongly Claims IHRA...
After Vancouver Adopts IHRA, CBC Radio Interviews Fringe...
Qatar Prepares For The 2022 World Cup: Will...
Lawfare: Who is Using the Law More Effectively?...
Official Publication of the College of Physicians and...
Home Daily Brief CBC Op-Ed Carries Claim that Iran Acting in Self Defence, Portrays Iranian President as “Moderate” 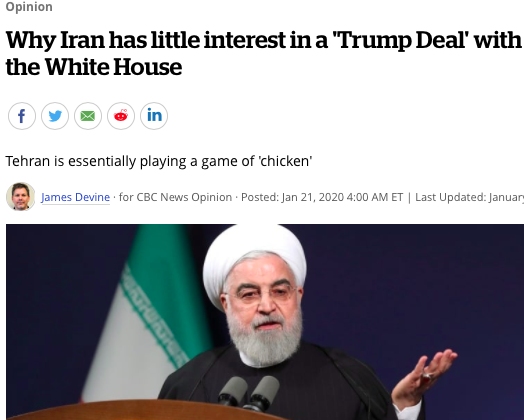 On January 21, CBC News’ Opinion section published an op-ed about “Why Iran has little interest in a ‘Trump Deal’ with the White House,” arguing that “Tehran is essentially playing a game of ‘chicken'” with the United States.

The commentary was written by James Devine, an associate professor at Mount Allison University in Sackville, N.B. According to his bio, Devine’s research focuses on the politics and foreign policy of Iran.

While Professor Devine is entitled to his opinions, we take issue with his referring to Iranian President Hassan Rouhani as a “moderate,” as the regime he presides under is best known for its serial human rights abuses and for hanging gays, murdering dissidents, and jaililing journalists. In his polemic, Professor Devine argued that Iran thinks it’s been acting in self-defence, by that, Professor Devine referred to Iran’s missile program, but failed to explain why Iran claims it needs intercontinental ballistic missiles (ICBM’s) which arguably are not for defensive purposes.

Professor Devine describes Iran’s propping up the brutal and murderous Assad regime and using terror proxies in Syria, Lebanon and Yemen as Iran’s merely exerting its “regional influence,” rather than being a Mideast destablizer and the foremost state sponsor of terror.

Sadly, this is the kind of claptrap we can expect on CBC News.