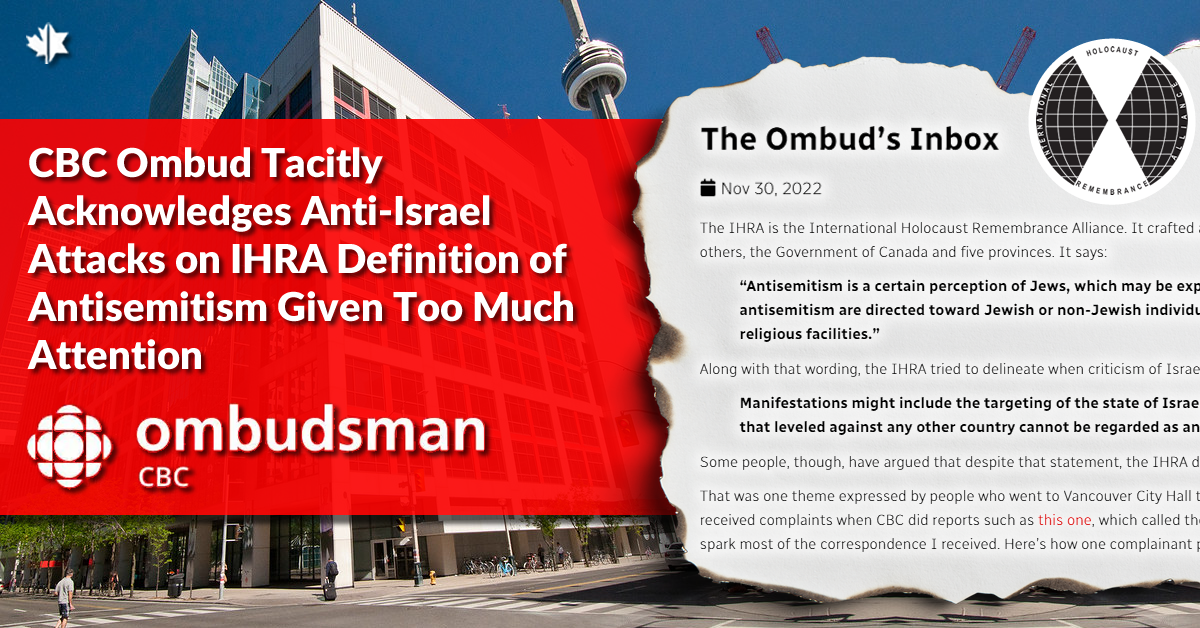 The definition, in addition to identifying antisemitism as, in part, “a certain perception of Jews, which may be expressed as hatred toward Jews,” also gives 11 real-world examples to show how antisemitism has morphed and shifted in recent years.

Since being adopted by more than 30 countries in 2016, the IHRA definition has been accepted by the provinces of Alberta, Ontario, Manitoba, New Brunswick, and Quebec has promised to do likewise.

Despite this widespread acceptance, anti-Israel groups in Canada and elsewhere have lobbied feverishly against the adoption of the IHRA definition, falsely claiming that it’s aimed at stifling debate over the Israeli-Palestinian conflict.

The complaints of these anti-Israel organizations have garnered significant media attention, and much of the coverage has been misleading and problematic, not just for discussion over the IHRA definition, but for how much attention news outlets gave to fringe groups in the first place.

A recent blog post by Jack Nagler, the CBC’s Ombudsman, demonstrates that even in the highest echelons of the broadcaster, there remains disquiet about how much attention and news coverage has been given to anti-Israel critics who have labeled the IHRA definition “controversial.”

“The journalistic issue seems to me less about whether there was controversy in either instance (there was), and more about the judgment CBC employs when deciding how much attention to pay to it,” Nagler wrote in a November 30 blog post.

As Nagler suggests, just because groups have labeled the IHRA definition “controversial” does not necessarily merit widespread news coverage for them to air their grievances.

He draws a comparison to Canada’s Muslim community, which in 2017 was “perplexed that people said the same kind of things about a Parliamentary motion condemning Islamophobia.”

Notwithstanding Nagler’s comments, CBC News published two separate news items covering these groups complaints over the Vancouver vote, and not only used the term controversial, but gave undeserved credibility to the groups attacking the IHRA definition of antisemitism.

One article, a November 14 piece by Janella Hamilton, was given the headline “Human rights advocates oppose Vancouver motion to adopt controversial definition of antisemitism.”

Both articles subsequently made reference to Independent Jewish Voices (IJV), an organization which – despite referring to itself as an organization fighting for “equality and human rights,” is in fact a rabidly anti-Israel pressure group with the sole agenda of attacking the Jewish State.

Independent Jewish Voices, according to its website, is a proud supporter of the Boycott, Divestment, & Sanctions (BDS) movement against Israel. The BDS movement, established in 2005, seeks not only to demonize Israel, but to delegitimize its very existence, falsely characterizing it as a settler colonialist, racist and apartheid regime based on the ethnic cleansing of Palestinians.

Independent Jewish Voices has also been accused of spreading Holocaust denial through its social media channels.

It is unsurprising that a number of governments, including Canada’s, have spoken out forcefully against the BDS movement. In 2019, the German parliament, surely recognizing its unique role in opposing antisemitism, designated the BDS movement as antisemitic, stating that the “pattern of argument and methods of the BDS movement are anti-Semitic,” and that the movement recalls “the most terrible phase of German history.”

While it is clear that groups like Independent Jewish Voices describe themselves as defenders of human rights, what is far less clear is why CBC News decided to unquestionably affix such an honorific to the group.

By supporting the BDS campaign, which in turn de facto opposes Israel’s right to exist, Independent Jewish Voices is a highly controversial organization which, while claiming to speak on behalf of Canadian Jews, is in reality a fringe movement not representative of mainstream Canada’s Jewish community.

It is also noteworthy that the IHRA definition, which makes it clear that “criticism of Israel similar to that leveled against any other country cannot be regarded as antisemitic,” states that “denying the Jewish people their right to self-determination,” is an illustrative example of antisemitism.

The denial of the Jewish collective right to self-determination in their ancient, historic homeland is listed as an example of Jew-hatred by IHRA, and for good reason. Today, antisemitism manifests itself in many different ways, including in the campaign to delegitimize the Jewish People’s right to determine their own future, in their own homeland. Calling a spade a spade is therefore critically important.

As CBC’s Nagler points out, just because an organization sees the IHRA definition of antisemitism as “controversial,” does not necessarily mean it requires widespread news coverage. And when that coverage does happen, as it did with CBC News, it is deeply problematic to give undeserved credence to fringe groups who espouse quite controversial views of their own.