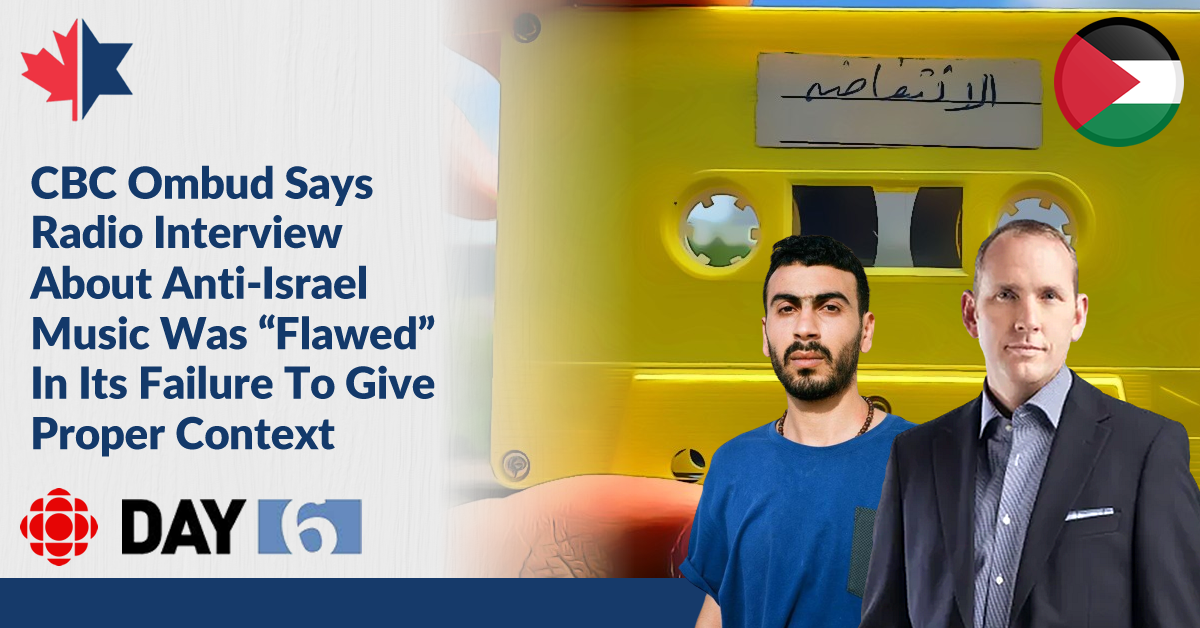 HonestReporting Canada is pleased to share that, subsequent to a complaint we lodged with the Canadian Broadcasting Corporation (CBC) in the spring relating to an episode of the CBC Radio One program Day 6, the Ombudsman acknowledged our complaint, and while not upholding our full concerns about the extent of the issues with the episode, nevertheless, recognized it as “flawed.”

On November 22, 2022, CBC’s Ombudsman Jack Nagler responded to a complaint from Mike Fegelman, Executive Director of HonestReporting Canada, about the April 2 broadcast of Day 6, a program on CBC Radio One.

The segment in question, titled “Digitizing Palestinian music from the ‘60s, ‘70s and ‘80s,” featured an interview with Mo’min Swaitat, an actor and producer based in London, England, and told the story of his experiences discovering and digitizing Palestinian “resistance” music.

As HonestReporting Canada stated both in its complaint to CBC and in its alert, “CBC Radio Program Whitewashes and Ignores Palestinian Terrorist Attacks,” we took issue with the CBC’s failure to give context to what made the music problematic, as well the failure on the part of the host, Peter Armstrong, to sufficiently challenge his guest on anti-Israel statements being made.

In his introduction to the segment, Armstrong referred to a recent string of Palestinian terror attacks in Israel as a “new wave of violence.” During the interview, Swaitat referred to the song Intifada by Riad Awwad, which was “part instruction manual for revolution” and which was “calling for resistance” against Israel, as music which helped Swaitat connect “to my heritage and my culture,” effectively whitewashing its promotion of violence of Israel.

Swaitat told Armstrong that it was an act of terrorism for Israel to seize such music, as it did in the 1980s for fear of it being used as incitement, but Armstrong failed to push back on Swaitat’s statement, or challenge him on why the music was seen by Israel as an incitement to violence.

In his report, Ombudsman Nagler quoted Nancy Waugh, CBC News’ Senior Manager of Journalistic Standards, who defended the Radio One segment as being sufficiently thorough, but concluded by writing “I don’t expect you (HonestReporting Canada) to agree with Mr. Swaitat’s view, but that doesn’t mean he shouldn’t have the opportunity to express it.”

As noted in the Ombudsman’s review, we pointed out that this was a mischaracterization of HRC’s position, writing that “I agree that Mr. Swaitat should have an opportunity to express his personal opinions, but we are of the view that the CBC is duty bound to challenge him on this controversial issue.”

In his final report, Nagler agreed with one of the main points of HRC’s complaint: that the segment did not effectively give listeners a full picture of what made the music in question so objectionable.

“Listeners would have benefitted from hearing some of the actual lyrics, so they would understand the message of Riad Awwad’s music. Otherwise, how could they draw informed conclusions about Israel’s confiscation of this music and detention of Mr. Awwad all those years ago? And how could they consider whether in 2022 the re-release of these songs was likely to inspire Palestinian pride, fan the flames of violence, or both,” Nagler wrote.

While this review by the CBC Ombudsman does not accept all the objections and conclusions raised by HonestReporting Canada, Nagler thus did refer to the radio segment as “flawed” due to its failure to appropriately give context to what made the Palestinian music problematic.

This review highlights an important component of the work done by HonestReporting Canada: when it comes to media bias, inaccuracy or other problems pertaining to coverage of Israel or the Middle East at large, the issue is not always what is reported, but what is omitted, because sometimes the failure to give appropriate context can do a great disservice to listeners, viewers and readers.

This review is also a reminder of the importance of HonestReporting Canada’s round-the-clock vigilance and our timely alerts, which inform stakeholders of issues relating to Canadian news media coverage of Israel, and the need to speak out when there are problems – or omissions – which need addressing.