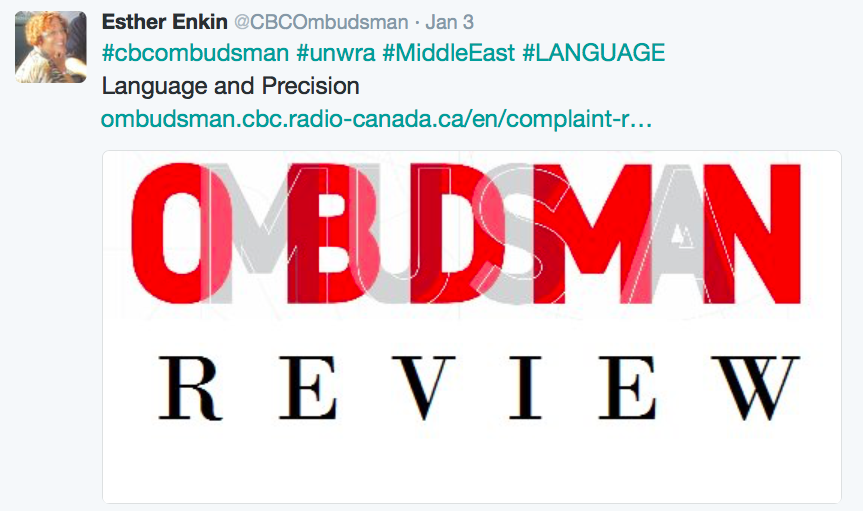 On January 3, CBC Ombudsman Esther Enkin partially upheld a recent HonestReporting Canada complaint finding that a November article by Mideast bureau chief Derek Stoffel which mentioned Canada’s cutting core funding to UNWRA under the Harper administration, should have included relevant context stating that the funding cut was due to UNWRA’s being closely tied to the Hamas terrorist group and was a hotbed for anti-Israel extremism.

As we told the CBC, failure to mention this information may have led CBC readers to wrongly conclude that core funding to UNWRA was at the time cut for strictly political or other purposes.

Ms. Enkin agreed with our perspective by noting the following:

“It is true that this was not the main thrust of the larger article, but the way it is phrased can lead to the impression that the funding was withdrawn because the agency was assisting Palestinians in any way. It is too broad to be clear. The Conservatives ended the funding because there were allegations that it was too closely tied to Hamas. I agree some reference to the Conservative government’s concern that UNWRA had ties to Hamas as the reason for ending the funding would be more accurate and would provide context.”

In 2013, the New York Times issued a correction to their falsely describing the US position by correctly noting that Washington has taken no such position on the ‘legality’ of the settlements. Here’s the correction in its entirety:

Correction: August 8, 2013: An article on Monday about a decision by the Israeli cabinet to add several Jewish settlements in the West Bank territory seized by Israel in the 1967 war to a list of communities eligible for extra subsidies and better mortgage rates and loans for new homeowners misstated the United States’ view of such settlements. While much of the rest of the world considers them illegal, as the article noted, the United States has taken no formal position in the last several years on whether they are legal or illegal. (In a statement on Tuesday, the State Department said, “We do not accept the legitimacy of continued settlement activity.”

Likewise, the Associated Press recently issued a similar correction on the topic: “In a story Nov. 16 about Israel’s settlement policy, The Associated Press reported erroneously that the United States considers Israeli settlement construction in the West Bank to be illegal. While the United States opposes settlement construction, it does not take a position on its legality. Instead, it says that settlements are “illegitimate,” ”corrosive to the cause of peace” and “raise serious questions about Israel’s ultimate commitment to a peaceful negotiated settlement with the Palestinians.” Most of the international community views the settlements as illegal.

CBC’s Ombudsman stated only: “The definition of “illegal” in the Canadian Oxford dictionary is “not legal” or “contrary to law.” The same dictionary defines illegitimate as not authorized by law: i.e. illegal. The reference you make to Canadian Policy on Key Issues in the Israeli-Palestinian conflict notes the settlements are in violation of the Fourth Geneva Convention.”

Again, nowhere does official Canadian Middle East policy use the word “illegal” to describe Israeli settlements, a point we will continue to make to CBC editors.