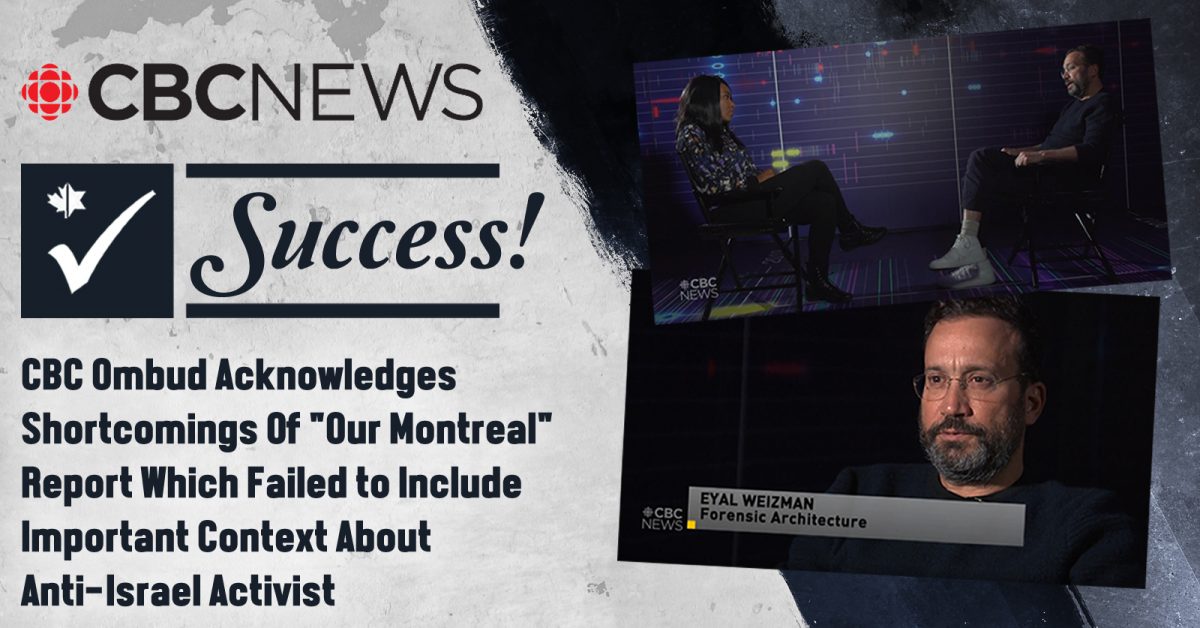 HonestReporting Canada is pleased to share that, subsequent to a complaint we lodged with CBC last year regarding a CBC program called Our Montreal, the broadcaster’s Ombudsman acknowledged our criticisms and recognized that important information was left out of the final report.

On September 15, 2022, CBC’s Ombudsman Jack Nagler responded to a complaint from an HonestReporting Canada subscriber, as well as HonestReporting Canada itself, regarding the CBC program, which was broadcast on December 4, 2021, which covered a new exhibit at Montreal’s Musée d’art contemporain (Museum of Contemporary Art) documenting Pegasus, a surveillance software, and NSO Group, an Israeli cyber weapons manufacturer.

As acknowledged by HonestReporting Canada at the time, there is no ethical issue in reporting on such an exhibit, but the CBC broadcast failed to disclose a number of important facts germane to the story.

The exhibit in Montreal was organized by a London, England-based organization, Forensic Architecture, which describes itself as a “research agency…investigating human rights violations.” What Our Montreal’s report did not disclose is how the group appears to have an inordinate laser focus on Israel, with 14 of its 66 investigations – nearly a quarter – focusing on the alleged actions of Israeli soldiers or the relations between Israelis and Palestinians.

In the Our Montreal broadcast, Forensic Architecture’s founder and director, Eyal Weizman, was prominently interviewed. In the report, Weizman claimed that Israel uses its “occupation” of Palestinians as a “laboratory” to test and develop new weapon systems which it subsequently uses to export to other countries around the world for profit.

In our complaint, we pointed out that the Montreal exhibit was far from the first time Weizman had been involved in causes harshly critical of Israel. In fact, he had even been declared a security threat and banned from entering the United States. But these facts – which would have undoubtedly helped viewers gain a deeper understanding and context of Weizman’s statements – were conspicuously absent.

In his report, CBC’s Ombudsman concedes the multiple shortcomings in the broadcast from Our Montreal.

Nagler quoted Heather Evans, CBC Quebec’s Director of Journalism at the time, who responded that their interview “fell short of what it should have been,” adding that Weizman’s background was not entirely explained during the report. “I certainly agree…that we should have included more information about Mr. Weizman that would have allowed viewers to better evaluate his remarks.”

For his part, Nagler pointed out that more context about Forensic Architecture and Eyal Weizman would have been important, writing that “Ms. Evans conceded that the program should have included more information about Eyal Weizman to judge what he said.”

Nagler encouraged CBC to do better in the future and added that “… this would have given viewers more insight into the history of the group. This in turn would have allowed them to draw more informed conclusions about how much weight to give his comments on Israel as they pertained to the exhibit.”

While this CBC Ombudsman report is not a full acceptance of HonestReporting Canada’s complaint, it is nevertheless an important acknowledgement that the broadcast in question fell far short of its Journalistic Standards and Practices.

Both Eyal Weizman, and the organization he runs, Forensic Architecture, have a long history of anti-Israel practices, bordering on fixation, and CBC’s Our Montreal report was duty-bound to ensure that viewers have a full and accurate understanding of who was organizing the exhibit at Montreal’s Museum of Contemporary Art.

This report, though it comes nine months after the episode in question, is a timely notice that when it comes to Israel, inaccurate reporting can manifest itself in many ways, including the omission of important contextual information.

This Ombudsman report is also an important reminder that HonestReporting Canada subscribers remain at the forefront of helping to hold Canadian news media outlets accountable for what they broadcast – and also what they fail to broadcast.