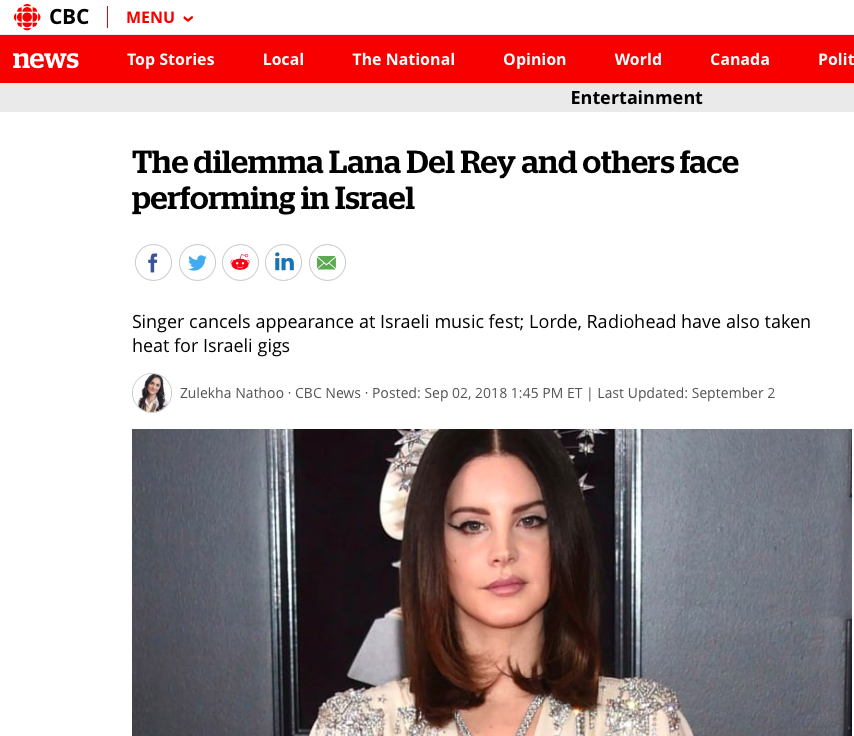 HonestReporting Canada takes strong issue with the highly editorialized word choice used by CBC editors in claiming that a “dilemma” exists for Lana Del Rey and other musicians who chose to perform in Israel. The headline above was featured in a September 2 article by CBC entertainment reporter Zulekha Nathoo.

The word “dilemma” is defined as follows (emphasis added): “a situation in which a difficult choice has to be made between two or more alternatives, especially equally undesirable ones.”

The CBC’s headline effectively casts Israel as a pariah and rogue nation. In sharp contract, Israel is a beacon for tolerance, fundamental freedoms, equality and human rights. The only liberal democracy in the Middle East with a strict adherence to the rule of law. In Israel, artists of all strips (musicians especially) have the freedom to say what they want, to express themselves in the way they choose, and Israel is widely respected for its arts and culture scene. Israel is like all other enlightened countries, though it’s situated next to despotic nations who are serial human rights offenders. Interestingly, the CBC has not published an article about a “dilemma” existing in Del Ray’s performing in Istanbul, Moscow and Beijing – rogue nations themselves known for totalitarianism, assorted atrocities and persecutions of various minorities and stakeholders (artists, journalists, academics, etc.)

Yes, there is a vocal group of rabble rousers who actively call on musicians and other artists to boycott Israel, but that does not de facto make it a “dilemma”.

Importantly, the CBC article itself does not use the word “dilemma,” only the headline does. A more appropriate headline to this CBC article could be: “Under Apparent Pressure: Lana Del Rey Cancels Israel Concert”.

This would certainly be more objective and inline with CBC Journalistic Standards and Practices.

We have filed a complaint with CBC editors calling for this headline to be revised and we await the CBC’s reply to our concerns.