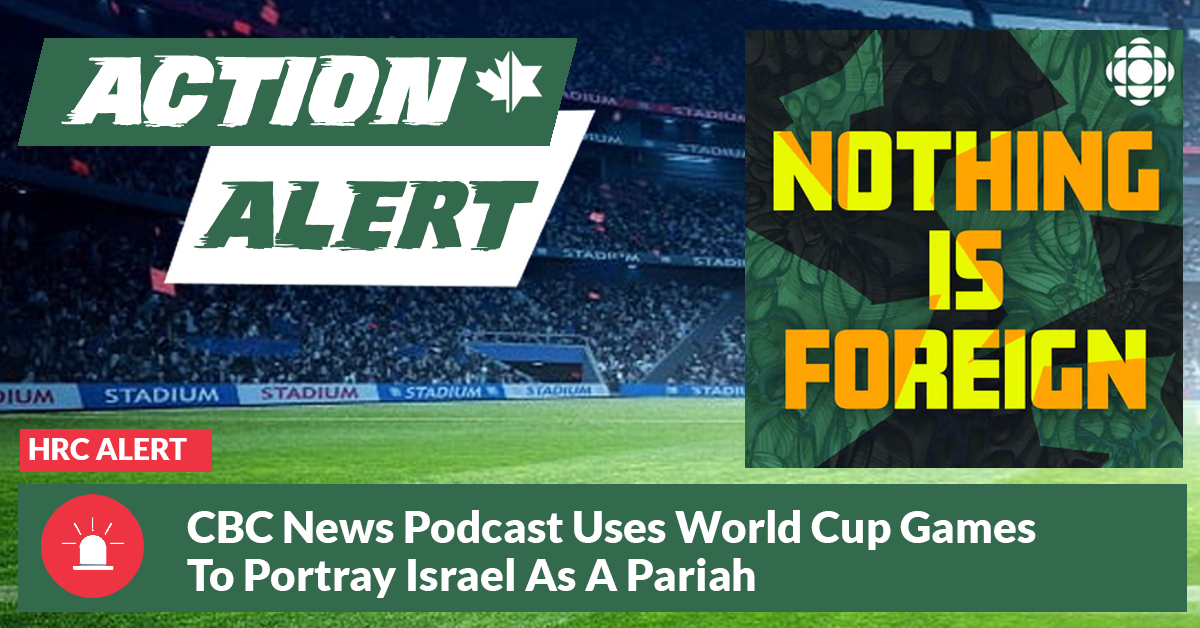 The FIFA World Cup games in Qatar, which began on November 20, has wrapped up after nearly a month.

The soccer competition garnered media attention for a number of reasons, ranging from the deaths of thousands of migrant workers who toiled to help construct Qatar’s World Cup stadiums under deplorable conditions, the country’s support for Hamas’ Islamist terrorism, and Morocco’s unexpected progress in the World Cup, prior to their elimination by France.

Regrettably, the competition has also given rise to an opportunity to denounce Israel and call into question its standing in the Middle East.

In the December 15 edition of the CBC podcast “Nothing is Foreign,” host Tamara Khandaker was joined by guest Vivian Nereim, Gulf bureau chief for the New York Times, who engaged in a lengthy discussion about how events in Qatar accompanying the World Cup games demonstrate that Israel’s increasing warm relations with the Arab world don’t represent the will of the Arab population at large.

Notably, Khandaker was one of the journalists in 2021 who signed an anti-Israel open letter calling for news outlets to more aggressively challenge Israel’s view in the Israeli-Palestinian conflict.

The anonymously-written letter falsely claimed that Israel was conducting “escalating violence against Palestinians,” including carrying out “indiscriminate airstrikes,” and that there is a “deep reluctance (by Canadian journalists) to cover the ongoing nature of the Israeli occupation.” The anti-Israel letter and its corresponding advocacy campaign, ignored how Palestinian terrorists initiated violence and at the time, had fired several thousands of rockets at Israeli civilians. The letter forcefully implied that Israel was committing “grave breach(es) of international law” and “ethnic cleansing.”

During her conversation with Nereim, Khandaker noted that the games have seen a number of public displays of support for the Palestinian cause.

“There’s been a real moment of pan Arabism…very visible and vocal expressions of support for Palestine and Palestinians. You’re seeing people really…seizing on the Palestinian flag as a symbol,” Nereim told Khandaker.

And while it is accurate that there have been many public displays of support for the Palestinians during the World Cup, Nereim oversimplified the significance of these proclamations.

Citing Bahrain and the United Arab Emirates (UAE), both of which have signed peace agreements with Israel, Nereim told Khandaker that “you don’t hear or see vocal dissent about” ties with Israel, because it was an “imposition of normalization” by “autocratic rulers.”

Strangely, Nereim continued her commentary by arguing that public displays of opposition to Israel in Qatar, in contradistinction to Bahrain and the United Arab Emirates, are more accurate.

“What you’re seeing is actually a more authentic and honest and less filtered reaction to the presence of the Israelis and the Israeli media,” Nereim told Khandaker.

This claim – that the public in Bahrain and the UAE are unable to speak freely, but in Qatar, they are – is nonsensical.

Qatar is an autocratic state, and an absolute monarchy where the overwhelming majority of the population are largely poor foreign workers. The entry of Israelis into Qatar for the World Cup was a precondition of the games, Qatar remains an active sponsor of Hamas terrorism, and is the home of Khaled Mashal, the exiled Hamas leader who lives in the country.

Insofar as one can assert that the public in Bahrain cannot speak out against Israel, one could also suggest that the public in Qatar feels pressured to do exactly that as the nation sought to divert attention away from its human rights violations. CBC failed to acknowledge and contextualize that displays of support for the Palestinians was orchestrated and supported by the Qatari government. As noted by foreign policy analyst Dr. Mitchell Bard, it was not spontaneous, nor representative of the will of the attendees. We know for a fact that overt political displays, whether rainbow symbols of the LGBTQ+ community or Iran’s revolutionary flag, were prohibited, but the Palestinian flag was a useful tool to divert attention away from Qatar’s abysmal human rights record.

More importantly, this entire argument – that the Abraham Accords, and the wider normalization trends taking place in the Middle East – run contrary to the popular will of the region is simply not the truth today that it once was.

While polls do show continued hostility to Israel in the region, widening ties between Israel and its neighbours are starting to have an impact in the shifting “attitudes in some parts of the Gulf towards unofficial ties with Israelis,” according to a report from the Washington Institute for Near East Policy.

Perhaps surprisingly, the same report found that almost half of Arabs in eastern Jerusalem view the Abraham Accords favourably, as do more than a third in the Gaza Strip.

While Morocco’s surprising progress in the World Cup may have merited attention, making a maximal claim out of minimal evidence – as Khandaker and her guest did – served only to mislead listeners and create a conclusion that is far from clear.

In her previous coverage of Israel, Khandaker failed to offer any countenance to guests who have made misleading claims, including speaking to a podcast guest who referred to Israeli flags as “provocative,” and another who has insinuated that Israel was created, not because of its historical rights, but because of the Holocaust. On May 20 of this year, CBC produced a podcast hosted by Khandacker entitled: “Israeli court decision could pave way for Palestinian evictions in West Bank,” that failed to properly include an Israeli perspective, that ignored Israel’s security concerns, and that carried accusations that Israel is an “apartheid” state that is “occupying” Palestinian land, and that Israel committed a “Nakba” on Palestinians. In 2020, Khandacker, who at the time was working for Global News, gave anti-Israel activist Rashid Khalidi a platform to spread misinformation about the Arab-Israeli conflict, without any challenge.

While there is no issue in covering the anti-Israel hostility that took place at the World Cup, to falsely claim that those public expressions are the only “authentic and honest” representations is simply without merit on Nereim’s part. And for her part, Khandaker, an anti-Israel activist journalist at our public broadcaster, failed to offer any meaningful rejoinders to these claims.

These are the natural outcomes and consequences that we predicted many months ago when CBC announced it was allowing its staffers who signed this partisan anti-Israel open letter to cover stories about Israel. HonestRepoting Canada is of the view that this opened the floodgates for CBC journalists to engage in advocacy/activist journalism, instead of being politically neutral and objective.

HonestReporting Canada has communicated these concerns directly to CBC News. Stay tuned to this page for any updates.