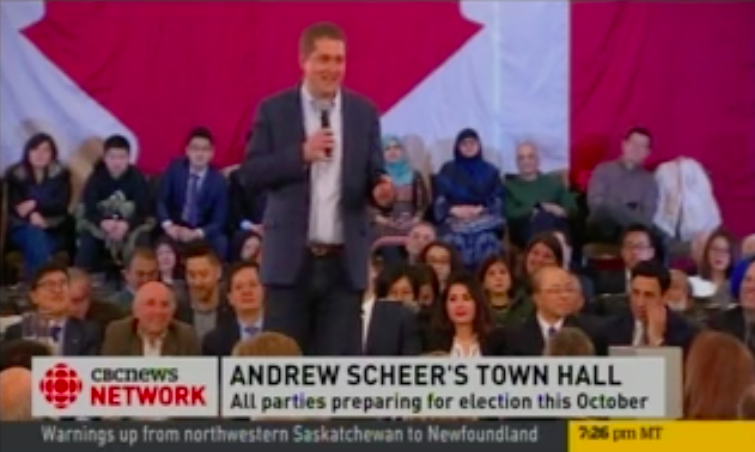 On January 21, HonestReporting Canada contacted senior CBC News executives to inform the CBC that on January 19, CBC TV and Online both erroneously reported that Conservative leader Andrew Scheer had pledged to move Canada’s embassy in Israel to Jerusalem from Tel Aviv.

Instead, Scheer repeated his pledge of recognizing Jerusalem as Israel’s capital. With regards to moving the Canadian embassy to Jerusalem, the Conservative Party of Canada says that matter will be considered should the party form government. This is confirmed by way of a CBC News story on February 26 which reported the following:

“It makes no mention, however, of whether or not a government led by the Conservatives would move the Canadian embassy from Tel Aviv. Jake Enwright, a spokesman for Scheer, said that would be discussed when the party forms government.”

Conservative leader Andrew Scheer reached out to potential voters at the town hall in Toronto tonight. After delivering a quick introduction attacking the Liberals, the Tory leader took questions from the audience on a range of topics including illegal immigration and government spending. He also reiterated his pledge to move Canada’s embassy in Israel to Jerusalem.”

CBC Online erroneously reported the following: “He (Scheer) reiterated his pledge to move Canada’s embassy in Israel to Jerusalem and said the Conservatives could appeal to young people by fighting for “free speech” on university campuses and changing mortgage rules to make it easier to buy a home.”

On Saturday January 19 at 6:40pm, Mr. Scheer actually said the following at the town hall:

On the Embassy in Israel, I have been very clear that a Conservative government would recognize Jerusalem as the Capital of Israel. To me and to many Canadians, it’s very simple, if you are going to go to speak to the president or key officials in Israel, or if you’re going to speak to the Israeli parliament, if you’re going to hear a case before the Israeli Supreme Court, you would be in Jerusalem, because that is where all those institutions are, that is where the government is, there has not been a serious peace proposal that does not include the recognition of that, so that is my position, I believe it is a recognition of fact while we can still work, and we absolutely still should work to help broker a peace solution that I do believe is an integral part of and has been the historical capital of the Jewish people and of Israel for millennia, and that is something that a Conservative government will recognize.”

In light of this information, we asked CBC News to broadcast an on-air and print correction to remedy these important errors.

We are pleased to note that CBC News has been cooperative and has recognized the errors its journalists made. Presently, CBC Online has amended its reporting which now states that: “He (Scheer) reiterated his pledge that the Conservatives would recognize Jerusalem as the capital of Israel.” As well, CBC Online published the following clarification notice:

Furthermore, CBC TV broadcast the following on-air apology and correction on Saturday January 26 during the 9pm newscast to correct the record about this matter:

CBC Anchor: “We’d like to correct something we reported around this time last week. Conservative leader Andrew Scheer answered questions at a town hall style event which we carried live. After that event, we reported that he pledged to move Canada’s Embassy in Israel from Tel Aviv to Jerusalem. That was incorrect. What he said was a Conservative government would recognize Jerusalem as Israel’s capital, so we apologize for the mischaracterization of his remark.”

At this time, we would like to thank CBC for the issuance of these important correctives and for its cooperation.