On the October 12 broadcast of CBC News Network at 8:05AM EST (watch here) and 3:50pm EST (watch here), CBC Anchor’s Reshmi Nair and Andrew Nichols both claimed that “most” of the Palestinian casualties killed in Gaza during the recent Israel-Hamas war were “civilians”. 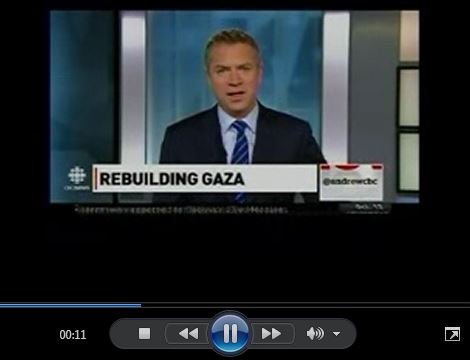 These statements were not made in attribution and CBC therefore presented this claim as an undisputed fact. Importantly, Israel claims that about half of the dead were terrorists, the majority from Hamas while over 150 Islamic Jihad terrorists were killed. That’s a 1:1 ratio of combatant vs. civilian deaths which is almost unprecedented in modern warfare. The Intelligence and Terrorism Information Center has now examined 1,017 names of Palestinian war fatalities in Gaza. Of the 874 dead who could be identified, terrorist operatives constitute 49.8% and non-involved civilians constitute 50.2%.

Time and again, CBC journalists have made this claim, sometimes, like in a recent Derek Stoffel report on the National on Gaza’s rebuilding or in this CBC.ca report, these figures are attributed to the United Nations, but almost never does CBC acknowledge Israel’s accounting that half of the dead Palestinians were combatants.

In the interests of fairness, balance, and accuracy, we asked the CBC to acknowledge this going forward. Stay tuned for an update on this page to see the CBC’s response.