On September 8, CBC News.ca published the following article to its website: 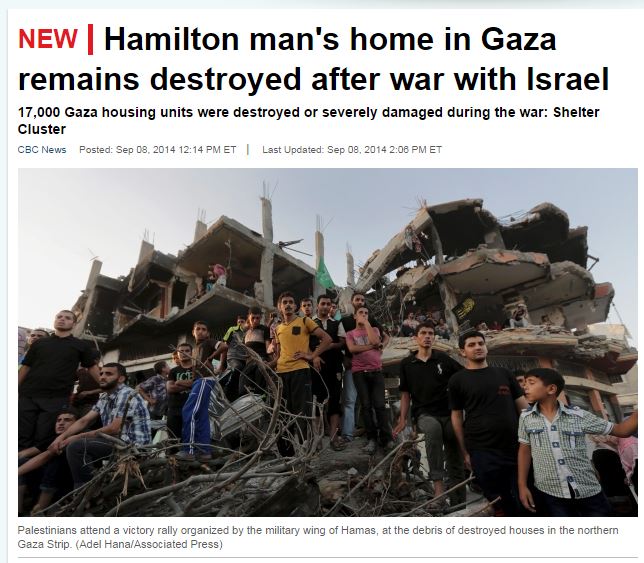 The report’s headline claimed  that a “Hamilton man’s home in Gaza remains destroyed after war with Israel,” while the report itself stated outright that “The Abu Dagga family’s home was destroyed by an Israeli airstrike last month, during the 50-day war that saw the most intense fighting between Gaza militants and Israel’s military.”

In correspondence with CBC News, we asked senior editors if CBC News could substantiate their claim that an Israeli airstrike hit and destroyed the Abu Dagga’s home with verifiable evidence. We asked, on what day/time specifically was the alleged attack? What were the circumstances of the attack? (Were terrorists/weapons housed there or nearby)? Who is to say that an errant Hamas rocket or laid explosives didn’t destroy the home? Or, did an Israeli strike on or nearby the home set off a secondary explosion due to weapons housed in the residence and/or the area?

As we told CBC, If we are to assume Israel did strike the house, Israel certainly didn’t do it arbitrarily and may have even warned the occupants to leave their homes as is their standard practice with emails, text messages, leaflets etc.

Finally, contrary to a sub-headline and body paragraph in this article, Israel lost 72 people in the conflict, not 71. Six civilians and 66 soldiers. As well, CBC claimed as if it was a matter of fact that “Over 2,100 Palestinians, most civilians, died in the war.” Meanwhile, Israel says that about half of the dead were terrorists and even Palestinian leader Mahmoud Abbas acknowledges that 850 Hamas terrorists were killed, along with over 150 Islamic Jihad terrorists. Certainly this should have been acknowledged by the CBC.

Due to CBC’s making unsubstantiated allegations and representing them as fact, and as a result of the lack of context and an Israeli perspective not featured in this report, we felt that this report violated CBC standards for its lack of balance and fairness.

Subsequent to our complaint, CBC did issue the following correction to this article:

CBC also amended the headline of this article which now does not reference the alleged destruction of this man’s home, but states that  a “Hamilton man rebuilds life in Gaza after war with Israel.” 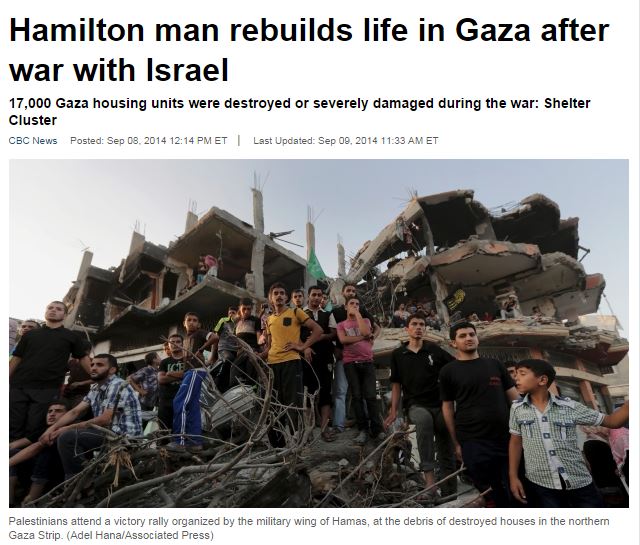 Meanwhile, the body of this article now makes makes this allegation though in attribution (emphasis added): “HE SAYS the family’s home was destroyed by an Israeli airstrike last month, during the 50-day war that saw the most intense fighting between Gaza militants and Israel’s military.”

Though some efforts were made by the CBC to rectify this matter, CBC published an unfounded allegation claiming Israel destroyed a Palestinian civilian’s home and when called to task and asked to substantiate the claim, CBC simply represented the matter now as a “claim” by a Palestinian, and altogether failed to provide facts and verifiable evidence to confirm the veracity of their original claims.

If this is what passes as news and journalistic accountability at our public broadcaster, Canadians should be deeply alarmed.