Israel Is An Imperfect Country, But A Vibrant...
Why Are Anti-Israel Activists So Afraid of The...
McGill Tribune Publishes Op-Ed Calling for a Boycott...
Ontario Arabic Paper’s Editor Downplays Holocaust; Meshwar Describes...
How the War in Ukraine is Having a...
Toronto Star Columnist Shree Paradkar Wrongly Claims IHRA...
After Vancouver Adopts IHRA, CBC Radio Interviews Fringe...
Qatar Prepares For The 2022 World Cup: Will...
Lawfare: Who is Using the Law More Effectively?...
Official Publication of the College of Physicians and...
Home Media Action Alerts2020 CBC Lobs Softball Questions to Fmr. PLO Representative on Israel & UAE Peace Deal 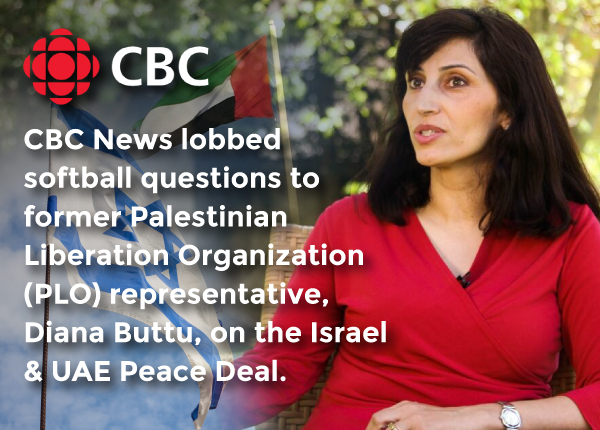 On August 14, CBC’s flagship radio program As It Happens featured a segment on the UAE and Israel peace deal to gauge the Palestinian reaction to the deal.

The program interviewed Diana Buttu (pictured right), a Palestinian-Canadian lawyer and a former spokesperson for the Palestine Liberation Organization (PLO) who said that the deal represented a “stab in the back” for Palestinians. (Queue to the 27:00 mark to listen to the interview). For Buttu, the deal was “shameful, disgusting and a real let down…. Israel is being rewarded for its ‘illegal behavior.'”

Armstrong, an experienced reporter on the Arab-Israeli conflict, didn’t press Buttu on historical Palestinian rejectionism, unilateralism, incitement, terrorism, corruption, etc. The only obstacle to peacemaking cited by Armstrong is the divide between Hamas in Gaza and the PA in the west bank. Armstrong ignored the positive aspects of the deal such as bilateral trade and cooperation on agriculture, cyber security, technology, food security, tourism, etc.

Interestingly enough, Ms. Buttu conducted the interview from where she lives: Haifa, Israel, which she uses as a perch to cavalierly attack Israel while living in the Jewish state with full and equal rights! Haifa has an earned reputation for being a place where Jews and Arabs live in harmony together.

The day prior, the same CBC program interviewed Aaron David Miller, a former Republican and Democratic advisor to U.S. Secretaries of State, who lauded praise for the deal.

Will CBC As It Happens interview an Israeli or Emirati source who can explain the virtues of the deal and the opportunities it represents to both countries and the region at large? We aren’t holding our breath, but call on the program to feature such an interview for the benefit of its viewership. Please join our ask by sending your considered comments directly to CBC As It Happens via their contact page.