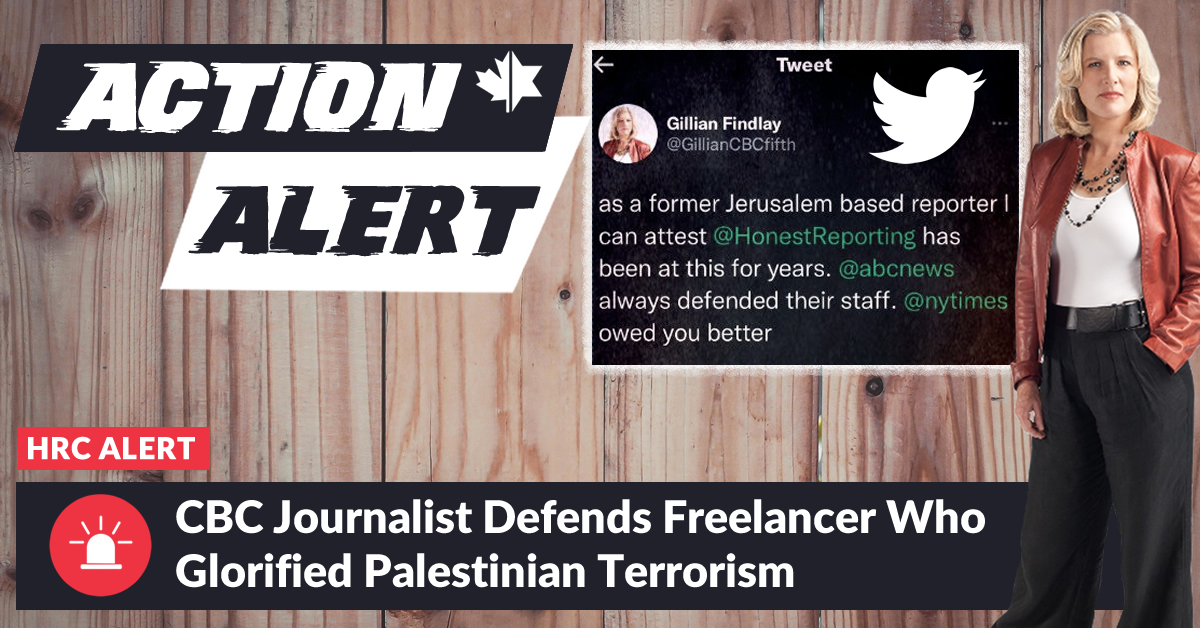 Subsequent to HonestReporting Canada’s alert and complaint sent to CBC News, Gillian Findlay, Co-Host of the investigative program “The Fifth Estate”, has been told that her October 12 Tweet violated the CBC’s social media policy, but has altogether failed to delete the offending Tweet, nor has she addressed her defense of a former New York Times freelancer who glorified Palestinian terrorism against Israeli civilians.

@honestreporting has complained about this earlier tweet. while i believe media organizations should protect their journalists against external lobbies I am advised this tweet violates CBC’s social media policy as it lacks context in its criticism of another media outlet. https://t.co/mCe1EXlxMT

On October 5, Hosam Salem, a freelance photographer working for the New York Times, posted on Twitter that his freelance work with the newspaper would be discontinued.

Salem, who had previously covered the conflict in the Gaza Strip between Israel and Hamas, told his followers the reason was because of his past posts on social media where he had “expressed support for the Palestinian resistance against the Israeli occupation.”

Salem’s Tweet – which was posted on Yom Kippur, the holiest day on the Jewish calendar – was liked by more than 55,000 people, and shared nearly 14,000 times. In subsequent Tweets, he argued that the true reason for his contract’s termination was “a systematic effort to distort the image of Palestinian journalists as being incapable of trustworthiness and integrity.”

But Salem did more than merely express his support for the Palestinian cause – he glorified Palestinian terrorists who had murdered and maimed Israelis.

In an exhaustive dossier prepared beforehand by HonestReporting.com and cited by Salem as a rationale used in his ouster, the Jerusalem-based organization reported that in one Twitter post dated July 20, 2014, Salem cheered the kidnapping of Israeli soldier Oron Shaul by Hamas, the Gaza-based Islamist terrorist group. Salem posted “Resistance captured a Zionist soldier…Glory be to Allah…”

In the immediate aftermath of when five rabbis were violently murdered while at prayer in a synagogue in the Jerusalem neighbourhood of Har Nof, Salem took to social media to applaud the killings.

Quoting the Koran, Salem wrote on November 18, 2014: “And if you find the disbelievers, strike the rivals…Summary of #Jerusalem operation today!”

More recently, Salem sympathetically eulogized Mahmoud Salem and Nabil Masoud, who blew themselves up at a marine port in Ashdod in 2004, killing 10 innocent civilians. In a post dated March 14, 2021, Salem referred to the two murderers, not as the terrorists they were, but as “martyrs,” adding “May Allah have mercy on them and have mercy on those who planned, prepared and participated” (in the suicide bombing).

In spite of this mountain of damning evidence showing Salem’s support for Palestinian terrorism against Israel, he has found support on Twitter from a fellow journalist, Gillian Findlay, co-host of the CBC investigative news program “The Fifth Estate.”

On October 12, Findlay shared Salem’s original Tweet, adding: “as a former Jerusalem based reporter I can attest @HonestReporting has been at this for years….@nytimes owed you better.”

as a former Jerusalem based reporter I can attest @HonestReporting has been at this for years. @abcnews always defended their staff. @nytimes owed you better https://t.co/SfsngmPIKw

This is bewildering. As co-host of The Fifth Estate, Findlay is presumably aware of the methods, practices and goals of investigative journalism, and yet in this case she appears to have accepted Salem’s narrative – that he is an innocent victim of racial prejudice by the New York Times – at complete face value. Furthermore, her public rebuke of HonestReporting via her CBC Twitter account was unbecoming of a CBC journalist who is tasked to be impartial and objective.

Had Findlay conducted even the most rudimentary of research into Salem’s Twitter and Facebook posts, or to HonestReporting’s report published in August 2022, she would have discovered an ongoing pattern of glorifying Palestinian terrorism.

One can only speculate as to why Findlay failed to perform this most basic of journalistic functions – research – but her public show of support for Salem demonstrates more than merely a failing of process, but a total failure in moral judgement. It also calls into question her ability to separate fact from fiction, and indeed to even report fairly and accurately on issues related to the Israel-Palestinian conflict.

As a journalist working for CBC, Canada’s publicly-funded national broadcaster, Findlay is responsible not only to her employer, but by extension, all Canadian taxpayers who are funders of the broadcaster. As such, HonestReporting Canada has filed an official complaint with CBC asking for a fulsome explanation for Findlay’s thoughtless Tweet.

Notwithstanding, Findlay’s Tweet defending Salem – a freelancer who glorified Palestinian terrorism and whose contract was terminated as a result by the New York Times – should also serve as an opportunity for the CBC to revisit their processes for how much investigation truly takes place by their investigative journalists. Please tweet your concerns directly to Gillian Findlay at @GillianCBCfifth.