On May 17, HonestReporting Canada contacted Marissa Nelson, the CBC’s Senior Director of Digital News to request a correction regarding an article the CBC published the day prior which claimed that Pope Francis called Palestinian President Abbas ‘an angel of peace’. 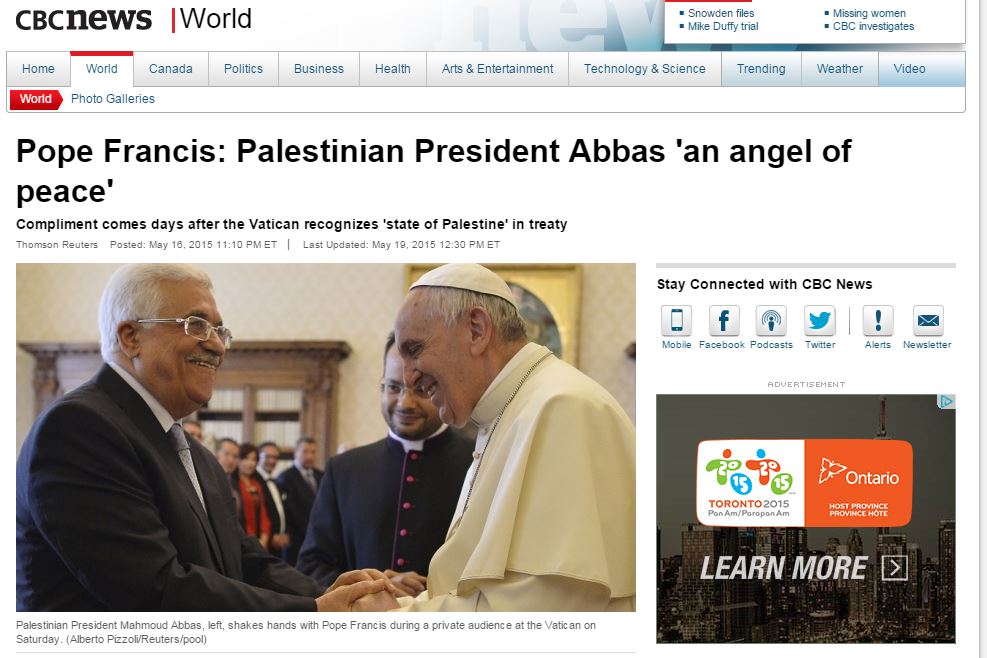 The report stated the following in its lead and body paragraphs:

Lead: “Pope Francis praised Palestinian President Mahmoud Abbas as an “angel of peace” during a meeting Saturday at the Vatican that underscored the Holy See’s warm relations with the Palestinians as it prepares to canonize two 19th-century nuns from the region.”

Body: Francis said he thought the gift was appropriate since “you are an angel of peace.”

In an interview aired on May 17 on CTV News, University of Prince Edward Island professor Robert Dennis claimed that “There was a bit of a misunderstanding about calling Abbas an ‘angel of peace’. It’s customary for the Pope to offer a gift to world leaders, usually this comes in the form of a bronze medallion, one is of Saint Martin which symbolizes the poor, or, a medallion symbolizing an angel of peace, so he wasn’t calling Abbas an angel of peace per say, he was inviting him to be an angel of peace, I think it’s a subtle, but a crucial distinction which the Vatican clarified those comments today.”

In light of this information, we asked CBC.ca to issue an immediate correction. While the CBC did not issue a corrective, they did commission a story update entitled: “Vatican says Pope meant no offence to Israel with ‘angel of peace’ remark”. 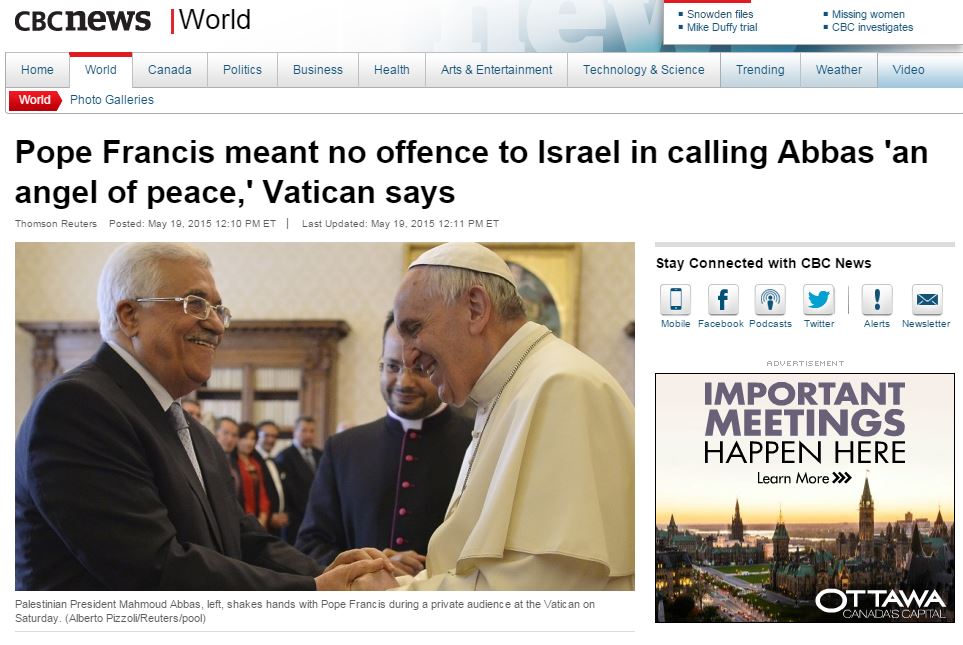 The full text of the article can be found below:

Pope Francis meant no offence to Israel by referring to Palestinian President Mahmoud Abbas as being “an angel of peace” and intended to encourage harmony between the two sides, the Vatican said on Tuesday.

Francis met Abbas at the Vatican on Saturday and used the words as he presented the Palestinian president with a large bronze medallion representing the angel of peace, one of his customary gifts to visiting presidents.

Receiving Abbas at the papal apartments, the Argentine pontiff, speaking in Italian, said the medallion was an appropriate gift because “you are a bit an angel of peace”, according to a reporter representing several news agencies at the meeting.

Vatican spokesman Federico Lombardi said he had not heard the remarks himself and had nothing to add to the words attributed to the pope by the pool reporter.

“It is clear that there was no intention to offend anyone,” Lombardi told Reuters.

Early reports had conflicted as to whether the pope urged Abbas to be an “angel of peace” or if he had described him as such.

The pope met Abbas a few days after the Vatican formalised its recognition of the Palestinian state, a move which riled Israel’s government.

The Vatican said after Saturday’s meeting that the two had expressed hope that talks between the two sides could resume after breaking down a year ago.

Francis and Abbas, who met last year with former Israeli president Shimon Peres in an unprecedented inter-religious event at the Vatican, had a “very colloquial” exchange as they exchanged gifts, Lombardi said in a statement.

“In any case, the sense of encouraging a commitment to peace was very clear and I believe that the very gift of the symbol of an angel of peace was made by the pope with this intention as well as previous presentations of the same gift to presidents, not only to Abbas.”

Lombardi said the pope explains the significance of the medal to heads of state who receive it, and that the word “angel” in this context means “messenger.”

Abbas also attended a canonization ceremony on Sunday, at which Francis made saints of two Palestinian nuns.