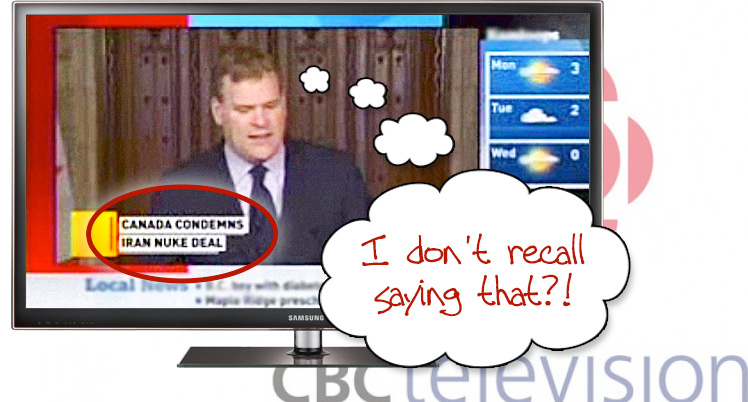 In the wake of the P5+1’s agreement with Iran over its nuclear program, Canadian news outlets featured wall-to-wall coverage of the deal, reactions to it, and the implications it posed to the international community, Israel and the Mideast region as a whole.

Of significance, we were concerned with the way that CBC News had characterized Canada’s reaction to the deal when it proclaimed that Canada “condemn(ed)” the agreement.

At 9:30am on November 25, CBC anchor Suhana Meharchand incorrectly stated that: “Canada stands with Israel in condemning the nuclear deal with Iran. Iran will continue enriching uranium but at a reduced level. it will allow more international inspections.”

To view this report please click here or on the image below. 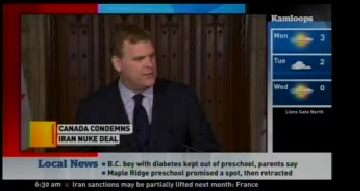 While it’s somewhat fair for CBC to deduce that Canada “stands with Israel,” (though it also stood with Saudi Arabia and other Gulf states) however, at no time has Canada “condemn(ed) the nuclear deal with Iran” or said that the deal doesn’t have Canada’s support. No statements by Canada, or through its Minister of Foreign Affairs John Baird, allow for this conclusion that was stated by CBC. Instead, Canada has taken a wait and see approach, and has declared “deep skepticism” about the deal. Here is the statement that Minister John Baird issued on the agreement:

“Canada has long held the view that every diplomatic measure should be taken to ensure Iran never obtains a nuclear weapon. We appreciate the earnest efforts of the P5+1.

“Effective sanctions have brought the regime to present a more moderate front and open the door to negotiations. Today’s deal cannot be abused or undermined by deception. The Iranian people deserve the freedom and prosperity that they have been denied for too long by the regime’s nuclear ambitions. Until then, Canadian sanctions will remain tough, and in full force.

“A nuclear Iran is not just a threat to Canada and its allies, but it would also seriously damage the integrity of decades of work on nuclear non-proliferation. It would provoke other neighbouring states to develop their own nuclear deterrent in an already volatile region.

“We will evaluate today’s deal not just on the merits of its words, but more importantly on its verifiable implementation and unfettered access of all Iranian nuclear facilities.”

In light of the importance of this error and the potential that CBC might make this false assertion again, we brought our concerns to the CBC’s attention and we are pleased to note that our public broadcaster acknowledged having made an error, and then immediately issued a clarification that was aired at 9:30am on November 26. That on-air clarification can be viewed by clicking here or on the image below: 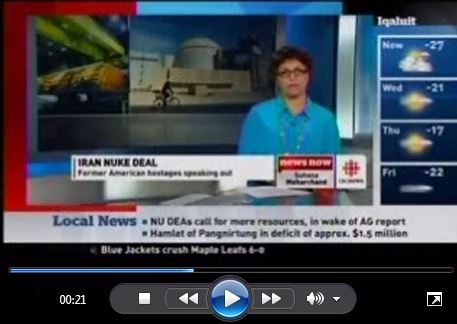 Anchor Suhana Meharchand: “Some of the Americans who were held hostage at the U.S. Embassy in Iran back in 1979 and 80 are speaking out about the international agreement on Iran’s nuclear program. Several of the 66 hostages are skeptical about the deal saying they do not feel the Iranian leadership can be trusted. Others call it a good first step. Under the agreement, Iran is supposed to scale back its nuclear program and allow more UN inspections in exchange for an easing of international sanctions and we just want to underline, in case it wasn’t clear in some of our coverage yesterday, Canada has expressed “deep skepticism” about the deal. Foreign Minister John Baird has said Canada will evaluate the deal on the merit of its words, and more importantly on its verifiable implementation and unfettered access to all Iranian nuclear facilities.”

HonestReporting Canada commends the CBC for its prompt issuance of this clarification on its national airwaves.