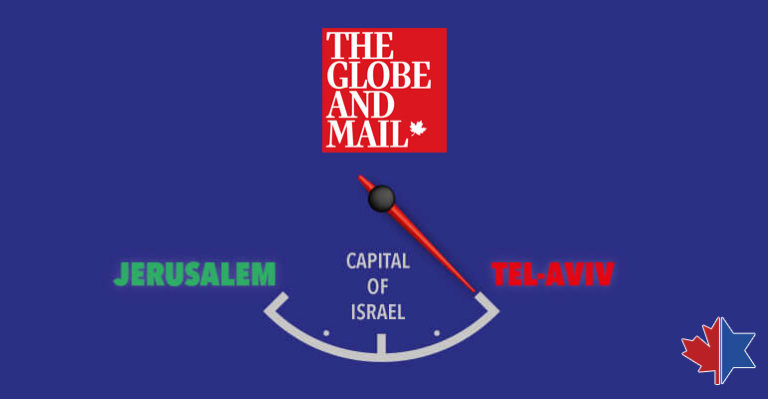 Here’s another example today where the Globe and Mail again wrongly claims that Tel Aviv is Israel’s capital.

A front page “analysis” report by Mark Mackinnon saw the Globe’s senior international correspondent say the following (emphasis added): “That offensive has brought Syrian government troops close to the Israeli-controlled Golan Heights, sparking fears in Tel Aviv that Iranian forces – which are also allied to Mr. al-Assad’s forces – will try to establish themselves in the region.”

In so doing, Jerusalem’s status as Israel’s capital was delegitimized. Tel Aviv is merely Israel’s financial and diplomatic centre, not its capital.

This is not the Globe’s first offence on this matter. Regrettably, on December 9, April 16, and on May 7, the Globe made these same errors. HonestReporting Canada has repeatedly filed complaints with senior Globe editors who have in the past forwarded our concerns to the appropriate staff involved, presumably to ensure that this error was not repeated.

In a similar vein, a CBC Radio report aired on July 6 at 10:00am EST by Beirut reporter Rebecca Collard stated the following (emphasis added): “Tel Aviv has been warning Syrian forces about getting too close (to the Golan Heights)”

To listen to this report click here or below:

As with the Globe and Mail, HonestReporting Canada takes strong issue with the CBC’s and Ms. Collard’s efforts to delegitimize Jerusalem’s status as Israel’s capital as she has implicitly claimed that Tel Aviv is the Jewish state’s capital in her reporting. This is patently false.

HRC has called for corrective action to be undertaken by the Globe and CBC. Stay tuned to this page for future updates.