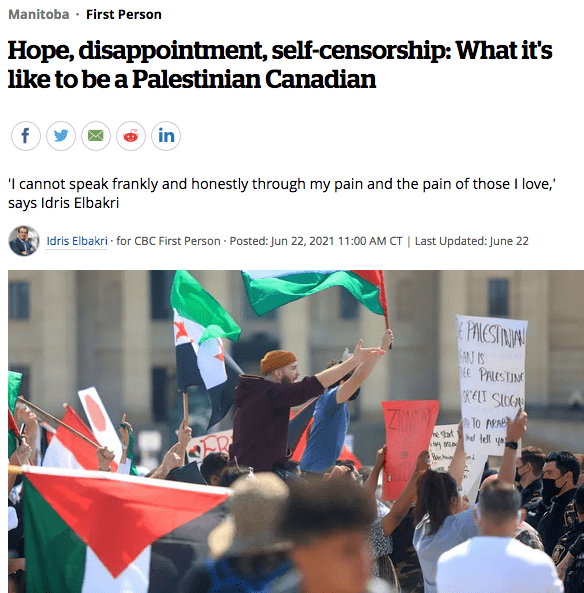 In his recent June 22 First Person commentary for CBC News, “Hope, disappointment, self-censorship: What it’s like to be a Palestinian Canadian,” Idris Elbakri tells his family’s story of coming to Canada, a narrative that was replete with misinformation about Israel.

Elbakri writes that his family were refugees who “fled the onslaught of the Jewish militias on their neighbourhood” when Israel achieved independence in 1948.

This claim of forced expulsions of Palestinians is widely made, but it does not stand up to scrutiny. When Israel gained it’s independence in 1948 as a Jewish State, after nearly two thousand years of occupation by the British, the Ottoman Turks, Saracen Arabs and others, many of Israel’s Arabs left the newly reborn State of Israel. Elbakri argues Israel kicked them out, but that is not true.

Many of these Arabs were threatened by their own Arab leadership to leave. As the Economist magazine reported at the time, “It was clearly intimated that those Arabs who remained in (the Israeli city of) Haifa and accepted Jewish protection would be regarded as renegades.” Another contemporaneous article by Time magazine reported that the Arab leadership wanted to harm Israel’s ability to function, and thus encouraged its Arab citizens to leave. “By withdrawing Arab workers, their leaders hoped to paralyze Haifa,” Time reported.

Unfortunately, grandiose tales of alleged Israeli brutality have spread far wider than the truth, but it’s nonetheless important to set the record straight.

Elbakri also veers into absolute fiction, as he describes Israel “in the context of Western colonialism,” but this allegation is not only misinformation; it’s an erasure of three thousand years of Jewish history in Israel.

The Jewish People have more than three thousand years of uninterrupted habitation in the land of Israel, and though they have been occupied and oppressed by a variety of global powers during that time, they never lost the desire to determine their own future.

Twenty six hundred years ago, the Babylonians destroyed the first Jewish Temple in Jerusalem – the ruins of which today sit under the al Aqsa mosque, which was built atop it – and since then, Jews both in Israel and around the world have hoped and prayed for a time when they could achieve self-determination in their historic homeland. Unfortunately, it seems that this right to self-determination, which is one which all peoples – including the Palestinians – have, it is only the Jews to whom it is denied.

The Jewish People’s reclaiming of self-determination in their historic homeland, then, is not only resolutely not colonialism in any way whatsoever; it is one of history’s most powerful rebukes of colonialism. Today, the Jewish people continue to walk in the footsteps of their ancestors, speaking the same language, and following the same culture and religion. And yet by libeling Israel as a colonialist state, Elbakri sees fit to erase the Jewish People’s history for more than three millennia. 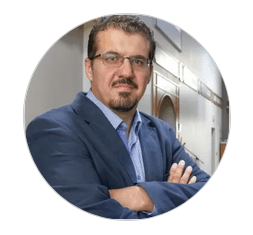 Elbakri (pictured right) repeatedly refers to the rebirth of Israel in 1948 as the “Nakba,” a provocative and hateful term which means ‘catastrophe’ in Arabic. By repeating this term, Elbakri repeats the defamatory claim that Israel’s very existence – the world’s only Jewish State – is somehow objectionable, despite the Jewish People’s extensive moral, historical and legal rights to the land. He also alleges that Israel has conducted “ethnic cleansing” of the Palestinians, but beyond the rhetoric, there is zero basis to this claim. Indeed, the Muslim population of Jerusalem has grown nearly 250% from 1987 to 2016, and their share of Jerusalem as a whole has grown from about one quarter, to nearly 40%. The Muslim population in Israel as a whole has also grown nearly ten-fold in the last 70 years, from about 200,000 to more than two million today, including a large contingent of Arabs serving in Israel’s coalition government.

Meanwhile, the 800,000 Jews in Arab lands who were forcibly expelled by Arab leaders after Israel’s rebirth in 1948 are today’s forgotten refugees. Before 1948, Jews represented nearly one-third of the population of Baghdad, Iraq’s capital. Today, there are no Jews left there.

Elbakri ends his piece by expressing his fervent hope that Jewish schoolchildren would one day pledge, “We acknowledge that our school stands on the homeland of the Palestinian people. We acknowledge the Palestinian Nakba and the harms of Zionism.” Unbelievably, our public broadcaster published Elbakri’s dream that Jews would apologize for Zionism, all while denying Jewish indiginieity to Israel.

No doubt Elbakri knows that successive Israeli governments have made many peace offers to the Palestinians, including giving Gaza, proposing to give eastern Jerusalem and virtually all of Judea & Samaria (commonly called the West Bank), but every single Israeli offer has been rejected by the Palestinian leadership, and zero offers have been presented in return.

Today, the Palestinian leadership – both Hamas and the Palestinian Authority – are founded on principles calling for the destruction of the Jewish State, and in Hamas’ case, calling for Muslims worldwide to wage war on Jews. Today, Palestinian state media, schools and mosques continue to dehumanize not just Israel, but all Jews.

If peace is ever going to happen, the first step is the acknowledgement on the Palestinian leadership and its apologists alike that the Jews have lived without interruption in Israel for three thousand years, and have a right to continue to be there. Unless they can do that, they will continue to deny their own people a state of their own.


While Mr. Elbakri is entitled to his views, we question why CBC News would give him a platform in light of the outright falsehoods he promulgated.

While CBC News has conveyed to HonestReporting Canada that it is currently working with a contributor from the Jewish community in Winnipeg to produce a similar First Person account, we question whether that would have occurred if not for public scrutiny.