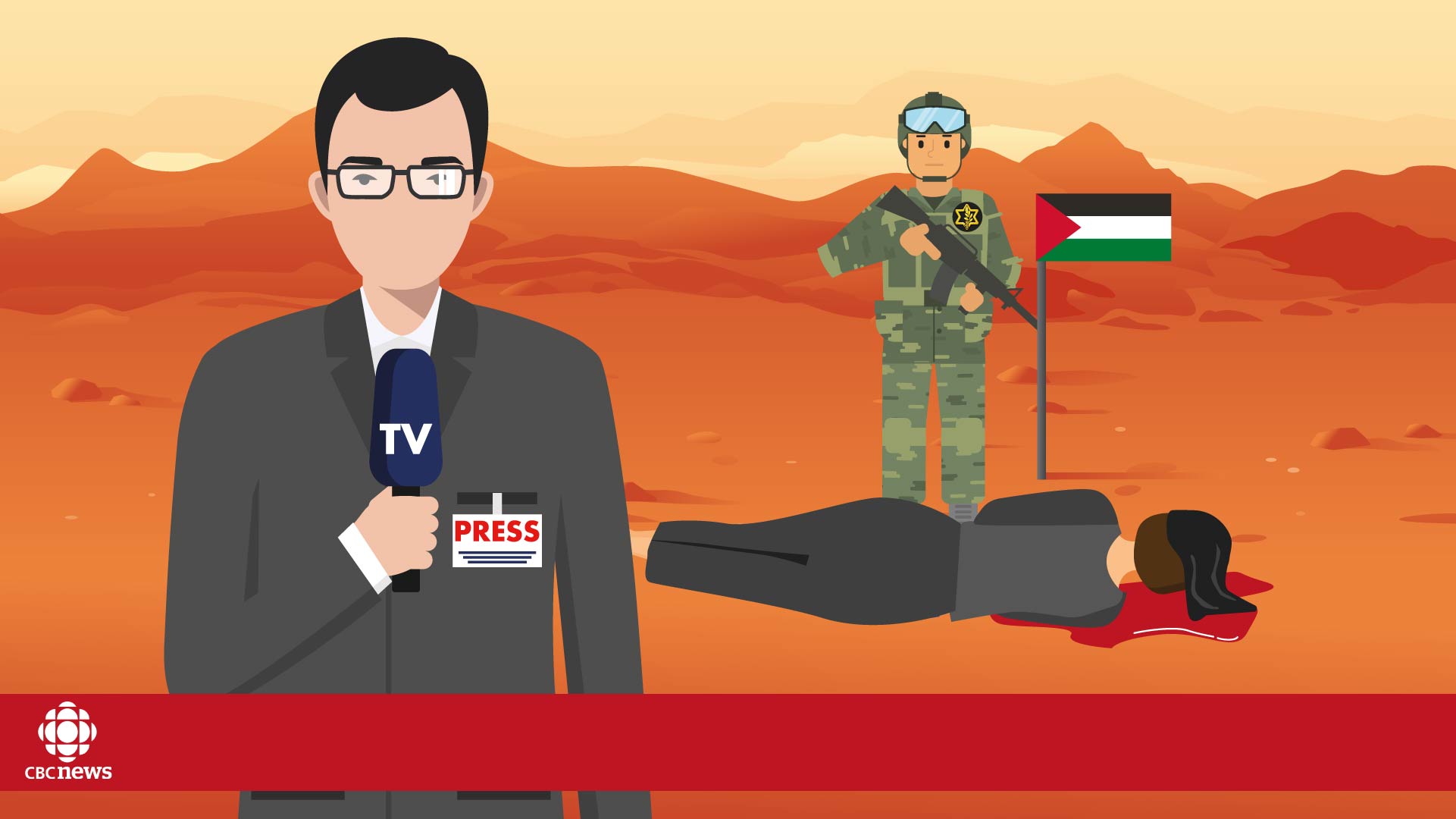 On September 26, HonestReporting Canada (HRC) asked CBC News to substantiate a claim they aired by a Palestinian “militant” who said that an Israel Defense Forces (IDF) sniper shot and paralyzed his sister.

CBC As It Happens flagship radio program broadcast an interview on September 25 entitled: “Exhibit invites Israelis to visit a Palestinian home — through virtual reality” which stated the following (emphasis added)

On the Israeli side is family called the Avidans. On the Palestinian side is the family of Raji Sebteen, 55, a former militant who “put the sword aside,” Landau said. Sebteen, who was jailed for a year by Israeli authorities and whose sister was left paralyzed by an Israeli sniper, now teaches Arabic to Israelis and advocates for non-violent resistance, Landau said.”

We asked CBC News if it could substantiate the claim that an Israeli sniper shot and paralyzed Raji Sebteen’s sister and if the CBC could provide context about the alleged incident?

On October 19, HRC received the following reply from our public broadcaster that altogether failed to provide any evidence to back up the claim. Here’s the response we received from Lynda Shorten, Executive Producer of CBC As It Happens that was sent to HRC Executive Director Mike Fegelman:

Dear Mr. Fegelman,
Thank you for your email, a copy of which is included below.
As indicated in my first reply, I needed some time to find out more about the As It Happens interview to which you refer in your email, and I thank you for your patience.
Raji Sebteen, the former Palestinian militant who is a participant in the virtual reality project, spoke to our As It Happens producer through an interpreter about what happened to his sister.
He explained that the incident happened in the village of Husan in 1989. On the day of the incident, Palestinians were throwing rocks at Israeli soldiers who were in the area. When Sabah Abdel Aziz Sabatin and her husband were driving in their car, according to their account, an Israeli soldier asked to use their vehicle. When they declined and started driving away,he says the soldier began shooting and shot Ms. Sabatin in the back. She has been left paralyzed since.
The producer also sent this information to the IDF. Their response was that it was “extremely difficult” to provide a statement given how long ago this is alleged to have happened, and without a more specific date. They also requested the identification numbers of those involved . As It Happens doesn’t have those numbers.
As you know, As It Happens turns to people whose experiences are central to the story being told, as we did in this instance. We remain true to our journalistic principles, including accuracy, by taking all reasonable steps to verify the facts in the stories we broadcast. And we have done so in this instance. There is nothing to suggest that the experience of this family as recounted to us, to the artist making the virtual reality documentary, or to the public who have seen this virtual reality documentary is untrue. And we have taken all reasonable steps to verify it.
I trust this satisfies your concerns.
As always, yours,
Lynda Shorten

In response, HRC told Ms. Shorten that to our dismay, CBC has been unable to substantiate this claim, nor has it been able to provide any evidence to confirm the veracity of the allegation.

The only information relied upon by the CBC are subjective and partisan claims made by a self described Palestinian “militant” who says he’s involved in “non-violent resistance”. An allegation of this variety, must be backed up by facts. CBC News has not sourced any evidence of any kind: no news reports, police reports, IDF or Palestinian Authority investigations, medical reports, legal documents, insurance reports, and testimony of potential eye witnesses. CBC doesn’t know the exact date the incident is alleged to have happened, nor the exact location. What was the name of the soldier in question? CBC doesn’t know. What is Raji Sebteen’s sister’s name? Has the CBC interviewed her? Has the CBC confirmed that she is in fact paralyzed?

In light of this information, we requested that CBC News broadcast an immediate on-air statement which acknowledges that the CBC has been unable to confirm this allegation. Furthermore, we asked the CBC to publish this statement to the CBC AIH webpage.

Importantly, Ms. Shorten claims that CBC took “all reasonable steps to verify the facts in the stories we broadcast.” Obviously that was not the case in this instance given that CBC has not verified the facts and as a result, this claim should not have gone to air given that the CBC couldn’t, and cannot now, corroborate it.

Ms. Shorten claims that “There is nothing to suggest that the experience of this family as recounted to us, to the artist making the virtual reality documentary, or to the public who have seen this virtual reality documentary is untrue. And we have taken all reasonable steps to verify it.” While CBC may believe the claims made by its source are true, we cannot discount the possibility that they are either outright falsehoods, and/or that the CBC’s source provided unreliable and/or incomplete testimony.

HonestReporting Canada considers that what has taken place is a serious violation of CBC Journalistic Standards and Practices which dictates the following standards (emphasis added):

Responsibility and Accountability Related to Interviews: CBC takes responsibility for the consequences of its decision to publish a person’s statements in the context it chooses. When we present a person’s statements in support of our reporting of facts, we ensure that the statements have been diligently checked. In the case of comments made by a person expressing an honest opinion, we ensure that the opinion is grounded in facts bearing on a matter of public interest.

Principles: Sources: ‘Newsgathering, whether investigative or routine, lives and dies based on the quality of its sources of information. The more controversial the story, the more critical the credibility of sources becomes.”

Double Sourcing: Our commitment to accuracy and integrity means we try where possible to verify the information with a second source. And there may be times when more than two sources are required. Our stories are based on information we have verified. Wherever possible, our stories use first-hand, identifiable sources – participants in an event or authenticated documents.

We respectfully requested that CBC undertake immediate corrective action to set the record straight. To our great disappointment, CBC stood by their original reporting and did not accept our invitation to discuss the matter further. Instead, CBC suggested that we ask the CBC’s Ombudsman to arbitrate our concerns and given that the CBC has been evasive to a dialogue on this issue, we have done just that and the Ombud has agreed to initiate an investigation.

The CBC’s failing to substantiate its sources claim that an IDF sniper shot and paralyzed a Palestinian woman was a flagrant violation of the CBC’s journalistic standards and this claim should never have been broadcast. We strongly encourage all HRC subscribers to please send a complaint to CBC Editor-in-Chief Jennifer McGuire to convey your concerns about this CBC As It Happens report which aired on September 25. Send emails to: Jennifer.McGuire@cbc.ca.