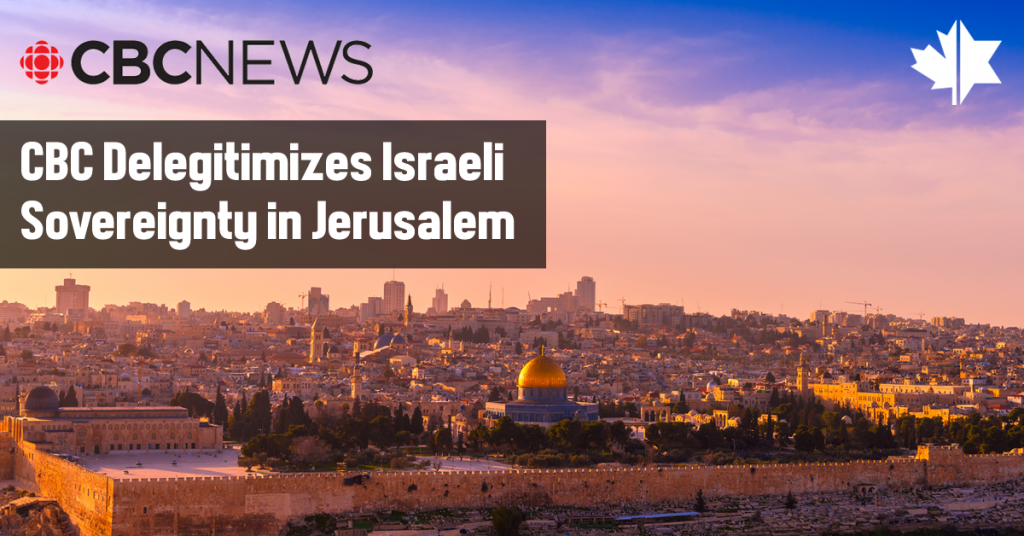 Jerusalem is the eternal and undivided capital of the State of Israel and while the status of the city is contested by the Palestinian leadership, Israel asserts its sovereignty there having annexed the eastern portion in 1980, including the Old City and its holy sites.

In 2017, the United States recognized Jerusalem as Israel’s capital and moved its embassy there. Canada’s official position is that it “considers the status of Jerusalem can be resolved only as part of a general settlement of the Palestinian-Israeli dispute. Canada does not recognize Israel’s unilateral annexation of East Jerusalem.”

CBC News refuses to accept Israeli sovereignty in Jerusalem to the point that it recently issued a correction for reporting that the Al Aqsa Mosque was one of Israel’s holiest sites.

In an introduction to a radio report about recent hostilities between Palestinian rioters and Israeli police, CBC stated the following on April 22:

Violence erupted inside one of Israel’s holiest sites. At the Al Aqsa mosque, Israeli police in riot gear fired stun grenades and rubber bullets. Some 30 Palestinians are injured. Israeli forces say they were hit with rocks and fireworks. This has been a month of conflict, freelance reporter Iris Mackler has more.”

Listen to the report by clicking immediately below:

The very next day, CBC broadcast the following correction:

Yesterday we reported on a confrontation between Israeli forces and Palestinians at the Al-Aqsa Mosque. We described it as one of Israel’s holiest sites. In fact, the site is in occupied East Jerusalem.”

Listen to the correction immediately below:

It’s noteworthy that CBC ignored how the Temple Mount is Judaism’s holiest site and that Israel asserts its sovereignty there, though it may be disputed by the Palestinians. Importantly, when Jordan occupied the area from 1948-1967, Jews were denied access to the Old City, and Jewish holy sites and artifacts were desecrated and destroyed. For many years, the Islamic Waqf, which oversees the site, removed thousands of tonnes of rubble from the Temple Mount that included archeological remnants from the First and Second Temple periods. In so doing, Jewish artifacts were destroyed at Judaism’s holiest site in an attempt to erase every sign and memory of its Jewish past, including the destruction of archaeological evidence of the site’s very connection to Judaism.

Yet, when Israel reunified the area, capturing it in a defensive battle in the Six-Day War, the area suddenly became “occupied” in the eyes of the international community and the media, but these lands weren’t regarded as “occupied” when Jordan held the land for 19 years. And when Israel captured the area, again in a war it didn’t initiate, but that it had preexisting claims to, Israel allowed Jordan, by way of the Islamic Waqf, to maintain control of the Temple Mount site. This included allowing only a small number of Jews to visit the Temple Mount, but denied them the right to pray at Judaism’s holiest site.

While Palestinian Authority leaders frequently repeat the lie that there was never a Jewish temple, something the CBC never reports on, this ploy did not succeed. Excavations and copious archeological evidence prove 3,000 years of Jewish indigeneity in Jerusalem.

Sadly, CBC cannot accept these facts and instead elects to delegitimize Israeli sovereignty in Jerusalem.