Here’s a short transcript of another CTV segment with Mr. Solomon:

Anchor Merella Fernandez: “Harper thinks there needs to be a change in (Iran’s) government, what more did he have to say?”

PowerPlay Host Evan Solomon: “This is all about timing, not substance because the substance of what Stephen Harper said is no different than things he’s always said. He’s been a hawk on Iran, he’s always wanted that Islamist regime to change, he’s often supported that. He’s openly, as he said at a conference where he was speaking in India, that he sides very much with the Israeli position, he’s very hawkish on that which regards Iran as a very dangerous state which, and he’s right, supports terrorist activities around that region. So, is anybody surprised that he wants that government to change? Absolutely not. What was interesting is the timing, because while he’s speaking in India about changing the regime, the Canadian government is trying to establish relationships to facilitate the family’s repatriating the remains of their loved ones, investigators getting full access and we don’t have any diplomatic relations because back in 2012 Stephen Harper’s government severed diplomatic relations with Iran. So, in the midst of the Trudeau government trying to forge some ties with Iran to facilitate the investigation, Stephen Harper is openly advocating regime change, as it were, he didn’t say those words, but that’s what he means and that’s a very loaded term and the timing of this was everything, the substance less surprising.”

In actuality, Stephen Harper spoke at a global summit in India and said only the following:

“I don’t think any of us believe that Iran would have deliberately shot down an aircraft, but the very fact that Iran, believing such a thing could happen, would be allowing normal civilian traffic, I think, tells you something about the nature of that regime and its priorities…I do believe we need to see a change in Iran if we’re going to see peace in the Middle East.”

I’m not in the business of defending @stephenharper, but he didn’t use the phrase ‘regime change’ in this interview. It’s a loaded term to say the least.https://t.co/s2hZormqtl

These false reports by Canada’s public broadcaster and CTV News mislead readers and viewers into thinking that Harper was advocating for either a military overthrow of the Iranian government, or perhaps, a coup d’état.

On Twitter and on the CBC News Article, the following clarification (which is really a correction) now appears: 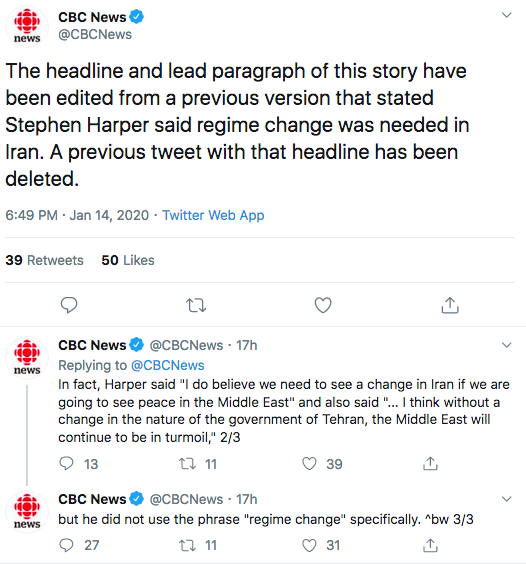 On the CTV News article, the following clarification (which is really a correction) now appears: