On November 18, CBC National broadcast a report by its Mideast Bureau Chief Derek Stoffel that focused on the recent terror attack at a Jerusalem synagogue that saw five Israelis murdered by Palestinian terrorists.

We were alarmed by one segment in this report which saw Mr. Stoffel state the following: “Six other Israelis have been killed by Palestinians in recent weeks. Palestinians say they’ve also been the victims of violence at the hands of Israelis, including the police shooting of a young Palestinian man earlier this month.”

You can watch the clip by clicking here or immediately below. 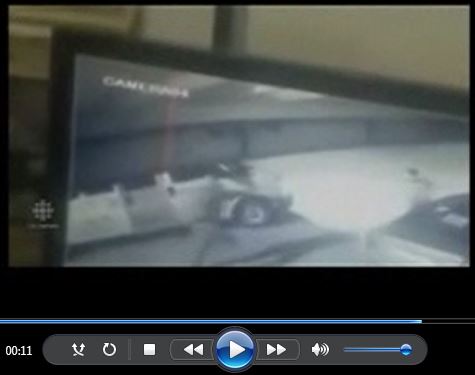 As we told the CBC in a complaint sent on November 20, while we appreciate that this last incident referenced, specifically the police shooting of a “young Palestinian man earlier this month” wasn’t the focus of this report, we were troubled that Mr. Stoffel failed to acknowledge that the Arab-Israeli youth had wielded a knife and had just attacked the police officer with it. Nor did the footage CBC aired show the images of this individual apparently attacking the car with the knife. As well, it’s important to point out that the youth was an Israeli-Arab, not a Palestinian as CBC claimed.

You can view a video of the full incident here or below.

In Israel, this incident is being hotly debated, some, like Israeli Prime Minister Netanyahu and Economy Minister Naftali Bennet have defended the officer, while others have condemned the shooting as not following protocol. Haaretz says: “Police insist that officers’ lives were in danger when the man attacked a police car with a knife, but footage indicates officers may not have followed protocol.”

It was our belief that a clarification notice should be issued by the CBC to acknowledge that the incident isn’t so cut and dry as was previously reported as a simple police shooting of an Arab-Israeli youth. According to Israeli authorities, the individual was not only carrying a knife, but had attacked the officer with that knife.

“It seems to me Derek is quite careful and clinical in his approach. He attributes to Palestinians the notion that they have been victims of violence, rather than accepting that characterization himself. He describes the shooting briefly but simply; he does not cast blame or aspersion on the police officer. I realize that the details of the police shooting are in dispute. But the important thing our reporter needed to accomplish in that section of the story was to explain to the Canadian audience why tensions in the region are so high these days. There’s no question that incident has – rightly or wrongly — angered some in the Palestinian community. And that’s as far as Derek went. To expect him to go even further and explain the nuances of that or any other single incident would have accomplished little but confuse the audience and take attention away from the day’s tragic events at the synagogue.”

We respectfully disagreed with Mr. Nagler’s conclusions. We stressed that CBC has to put itself in the position of the average viewer and question if this aspect of Mr. Stoffel’s report might have lead some CBC viewers to wrongly conclude that Israeli police had shot and killed an innocent (even unarmed) Arab youth. An event which may have and which still could, incite Palestinians and Arab-Israelis to commit violence. There’s a high likelihood viewers would come to this false conclusion because Mr. Stoffel never did mention, nor did the CBC show video, allegedly showing the knife attack.

This is the paramount issue and as custodians of the public trust, CBC could have and should have referenced this vital context.

Mr. Nagler argued that to include this context, what he referred as “nuance”, would have “confused” viewers. Yet, we fail to see how if Mr. Stoffel said the following it would have confused matters and taken away from the central thrust of his report: “Six other Israelis have been killed by Palestinians in recent weeks. Palestinians say they’ve also been the victims of violence at the hands of Israelis, including the police shooting of a young knife-wielding Palestinian man earlier this month.”

By adding two simple words, “knife-wielding”, this brought vital context to this incident and would have prevented viewers from being misled.

Not satisfied with the CBC’s reply, we asked Esther Enkin, the CBC’s Ombudsman to arbitrate our concerns. Regretfully, Ms. Enkin denied that a violation of policy had been committed.

“The sentence you are challenging, and the interpretation you bring to it, is a single reference in a story that is about something else entirely. It almost exclusively focuses on the horrible events of the day, the attack on men at prayer, resulting in four deaths and many injured. The reference to the earlier incident, the shooting of a young Palestinian by Israeli police, is in the context of a brief explanation of the escalating violence and tensions in Jerusalem. Mr. Stoffel’s script says:

‘Today’s incident is yet more bloodshed in a region that has seen violence almost every day for the last four months. Six other Israelis have been killed by Palestinians in recent weeks. Palestinians say they’ve also been the victims of violence at the hands of Israelis, including the police shooting of a young Palestinian man earlier this month. Much of the anger stems from a dispute over a contested Jerusalem holy site.’

Just as Mr. Nagler did, Ms. Enkin claimed that to have pointed out that the youth had wielded a knife would have confused viewers and that “the circumstances of the police shooting incident are too complicated to capture in a single phrase”. The CBC’s Ombud confusingly wrote that “as  always, context counts” and yet the context we viewed as vital was omitted. To reiterate, all this CBC reporter had to do was either utter two simple words “knife-wielding” or show two seconds of the video of the alleged knife attack. Regrettably, CBC elected to not present this vital context and deprived CBC viewers of this information.

Interestingly, a December 3 report (watch here) by CBC journalists Sasa Petricic saw this reporter refer to another stabbing attack, this time by a Palestinian, that injured Israelis in a report that focused on Israel heading to another election. We applaud this reporter for including the context about this incident of terror, an effort which we would like to point out certainly did not “confuse viewers” nor did it take away from the “compelling nature of the day’s events” as Israel went to the polls.