When participating in the CBC commissioned Vote Compass survey tool, many HonestReporting Canada subscribers were alarmed that Canadian support for Israel was singled out.

Vote Compass, which has in the past been accused of skewing results in favour of the Liberal Party of Canada, describes itself as “an educational tool developed by political scientists designed to help you explore how you fit in Canada’s political landscape.” To date, 446,390 people have responded to the survey.

In the foreign policy component of the 30 question survey, the following 3 questions appear:

We asked CBC News to please explain why Israel is singled out with a question asking “How supportive should Canada be of Israel?” while no questions about other countries that fall into the ‘foreign policy’ category are featured. No questions, for example, about Canadian support for the Ukraine, Russia, Syria, etc. Just Israel. 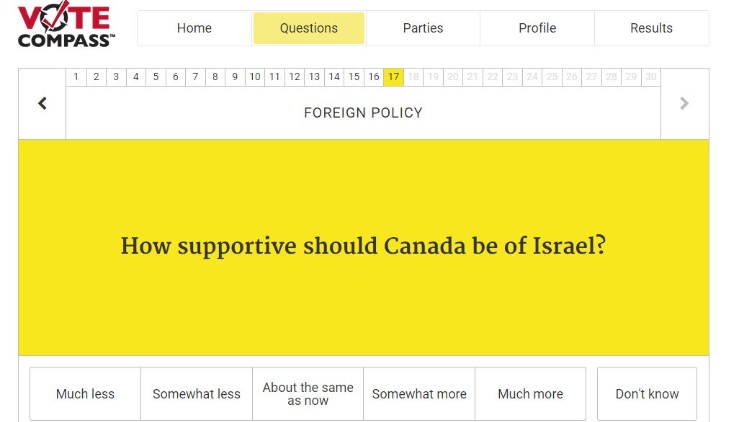 For the record, here is the reply we received on September 1 from Jack Nagler, Director of Journalistic Public Accountability and Engagement at CBC News, that was sent to HRC Executive Director Mike Fegelman:

First, you should understand that CBC does not have final editorial control over Vote Compass. It is a creation of the academics behind the tool (they call their company Vox Pop Labs). So I asked their Executive Director Clifton van der Linden, to explain how it works. Here’s what he said:

“The academic team undertakes a content analysis of official party statements and uses the findings to identify salient themes in the political discourse. They construct approximately 100 propositions (in both question and statement form) that relate to specific public policy issues within those thematic areas derived from the content analysis, and reflect points of differentiation among the party positions. All of the propositions are associated with Likert scale response options (ie strongly disagree …and up to strongly agree; or “much greater than….up to much less than). In order to control for acquiescence bias in survey design, the propositions are framed according to different perspectives: some are socially conservative, others socially liberal; some are economically conservative, others economically liberal (I use the lower-case meaning of those terms, not the partisan meaning).

These 100 or so propositions are then fielded to a representative panel of Canadians and the results are analyzed by the team at Vox Pop Labs. They use the responses to run a dimensional analysis, which identifies the propositions that contribute to stable ideological dimensions. The original set of 100 propositions is then narrowed down to a subset which correlate with the social, economic or constitutional axes in Vote Compass, which are in effect determined by Canadian public opinion.

The final selection of propositions is based on a variety of considerations. There is a concerted effort to achieve a balance of public policy themes (ie – the economy; foreign policy, etc). Furthermore, propositions must be relevant to the election discourse and produce distinct positions among the parties. It wouldn’t do much good, for example, to have a statement that reads: “Canada should have a stronger economy”. Obviously every party (and likely the entire general public) would agree with that. So preference is given to questions that allow people to delineate between the positions of the various federal parties.

The question about Israel meets those criteria. It’s an important issue, one which has been in the public discourse and the party discourse. And it’s an area in which there are important distinctions to draw between the positions of the various parties.

The same is true of the other foreign policy questions selected: one to do with foreign aid, and one with Canada’s role in the fight against ISIS. The preliminary set of 100 propositions contained more than dozen foreign policy issues and included country-specific propositions that referenced China, the United States, Russia, Ukraine, Iraq and Syria among others. But given the constraint of only having 30 propositions to develop a comprehensive rendering of the Canadian political landscape, these were eventually excluded following public consultation and dimensional analyses.

And finally, in your note you mentioned that the question about Israel was the final question in the foreign policy “basket”. The order of the baskets – and the order of questions within those baskets – is random. So if you were to use Vote Compass again, the order you get could be significantly different.