“Perhaps the biggest complaint raised by the Palestinian Football Association is that its players and officials cannot move freely around the Israeli-occupied West Bank.

The association holds up Farouk Assi’s case as a prime example.

Assi, 33, is a long-time Palestinian soccer referee. Last September, he was driving from his home in the West Bank city of Ramallah to Jericho to officiate a match.

But he was stopped by an Israeli checkpoint. Worried about a delay, he says he tried to ask the soldiers why they were being held. Assi alleges that Israeli security forces dragged him from his car and blindfolded him. Cellphone video given to CBC News by the PFA appears to show a confrontation between Assi and Israeli soldiers.

“They held me for an hour and a half,” Assi told CBC News. “It was very difficult to go through that experience.”

Palestinian players in Jericho waited for Assi, but he never made it to the game. It was eventually postponed.

Palestinian football officials say this is ongoing concern in the West Bank, where local players have been restricted in their movements and visiting teams from abroad have been denied entry.”

“The Palestinians are also expected to raise these issues in Zurich:

Israeli restrictions which make it difficult for players in Gaza to travel to the West Bank for games and training sessions.”

We found it very regrettable that this CBC.ca report failed to mention that Israel has legitimate security concerns wherein its armed forces and intelligence agencies have to take measures it deems necessary to do security checks, detentions, arrests, etc. to ensure that terrorists don’t enter Israel proper to carry out attacks and/or to ensure that those inclined to facilitate support for terror (whether logistically, through materials, money or otherwise) are not successful. We conveyed this concern directly to Mr. Stoffel and CBC.ca Managing Director Marissa Nelson asking that this information be included in this CBC.ca article.

Israel has no interest in preventing Palestinian soccer players from playing the game they love. Israel is only interested in security. Indeed only last week a player was detained at the Jordan crossing. Why? The Times of Israel reports:

“An Israeli security source told Israel Radio that the player, Sameh Marawbe, was detained for security reasons and was arrested six months ago for receiving funds and messages from Hamas representatives in Qatar to pass on to Hamas members in the West Bank city of Qalqilya.”

Meanwhile, the BBC reports the following today about this incident: “Israel explained later that Maarabe had been convicted last year of using an overseas trip to smuggle money and messages back into the West Bank on behalf of the militant group Hamas. To Palestinians that’s a story about the harassment of a footballer – to Israelis it’s about issuing a warning about re-offending to someone who has a criminal record and who happens to be a footballer.”

Just as the BBC carried this vital context, so too should have the CBC.

Then there’s also the matter of how Hamas terrorists have fired rockets into Israel from soccer fields as this IDF graphic from the 2012 conflict illustrates: 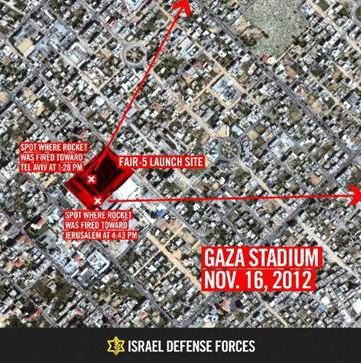 CBC has a duty to contextualize Israel’s security concerns, especially when faced with allegations of discrimination against Palestinians. We await the CBC’s reply to our concerns.