News that Hezbollah terror chief Mustafa Badreddine had been killed in Syria spurred considerable news coverage, both domestically here in Canada and abroad.

Who was Badreddine? Best known for being the architect of the 1983 Beirut barracks bombing that saw 241 U.S. soldiers killed, the creator of terror cells in Gaza and the west bank which attacked Israelis, the founder of the “Party of God’s” Iraq division which targeted American soldiers, and the mastermind behind the murder of Lebanese Prime Minister Rafik Hariri. Badreddine was an arch-terrorist whose efforts saw the murder of 1,000’s of innocents.

While most media outlets were judicious and did not appropriate blame on anyone as there were no claims of responsibility for the killing or evidence implicating anyone, the CBC presumed that Israel was guilty and claimed outright in an online news report that an Israeli airstrike had killed the Hezbollah commander, see our screen grab below from a May 13 CBC news article: 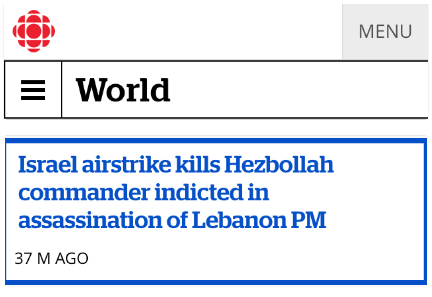 As we told senior editors at the CBC immediately after this report was published, at the time, Israel did not confirm (or deny) a role in his death which is in line with its standard policy of ambiguity. While naturally Israel is happy that Badreddine was killed, it’s important to note that while Hezbollah had initially blamed Israel, the terror group itself later claimed that a Sunni Islamist “rebel” group was responsible for the shelling that killed Badreddine in Syria.

As a result of our intervention, the CBC did retract its claim (see a correction notice it published per below) and amended its headline (also available below). As well, the CBC published a full article from Thomson Reuters on May 14 which detailed in full that “Hezbollah said on Saturday its top military commander, whose death it announced on Friday, was killed in Syria by Sunni Islamist artillery fire and not by an Israeli air strike as one member of the Lebanese Shia movement had said.” 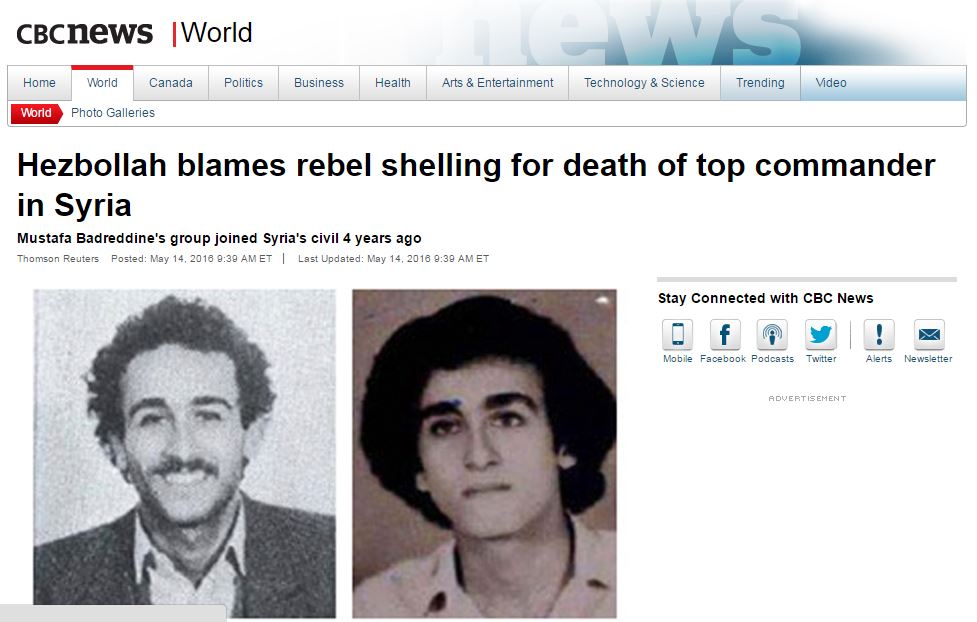 This is why HonestReporting Canada exists and why our work is so important in holding the media – especially our public broadcaster – to account for spreading lies and mistruths about Israel.

Please support our important work by making a donation today.