Updated: CBC and Waterloo Record Atone For Portraying Israel As An Abuser Of Palestinian Children

Subsequent to HRC’s alert, along with the significant response of our subscribers and a complaint we sent directly to CBC News executives, on December 5, CBC Radio aired an on-air clarification which carried context noting that Israel says it abides by international standards to safeguard Palestinian children’s rights when they are detained for engaging in violent riots and terrorism. The clarification said the following:

Last Sunday at this time, we told you about a protest happening in Winnipeg. Protesters were accusing Israel of human rights violations against child prisoners. CBC has not been able to get comment from the Israeli government regarding these accusations, but in responding to similar criticisms in the past, a government spokesperson has denied these allegations, stating that Israel does not engage in torture, humiliation, or solitary confinement to achieve confessions.”

To listen to the on-air clarification, click here or watch the video immediately below:

As well, CBC agreed to our request to amend its news article posted to its website and include a comment from the Israel Defense Forces. The CBC article now states the following:

A spokesperson from the Israel Defence Forces said in an email that it acts in accordance with local and international law.”

As a rule there is an absolute prohibition on the use of violence or inappropriate treatment for detainees,” the emailed statement said.”

In general, security forces detain minors in cases where there is reasonable suspicion … they are involved in serious crimes or pose a security threat. Such instances are just cause for their detention.”

While these correctives do not in any way redress the harm the CBC caused by falsely portraying Israel as a military abuser of Palestinian children, it does remind our public broadcaster that Canadians will no longer tolerate its anti-Israel bias.

We are also happy to report that HonestReporting Canada recently held a constructive meeting with Waterloo Record Editor-in-Chief Jim Poling, who, much to his credit, recognized the significant shortcomings of his paper for its publishing a front-page report that wrongly depicted the Israel Defense Forces as abusive of Palestinian kids, for failing to contextualize Israel’s security concerns and for relying on a terrorist organization as a source.

We are thankful to Mr. Poling for convening his senior editorial team and newsroom to hear our concerns and for the Record’s pledge to improve its editorial oversight and its commitment to journalistic objectivity, accuracy and fairness.

Day in and day out, Palestinian children are exploited for terrorism and propaganda purposes.

Despite this, the Waterloo Record (a Torstar publication) and CBC News would have you believe that Israel is a military abuser of Palestinian children.

As reported by Cheyenne Bholla on the front-page of the Waterloo Record on November 27, a small group of anti-Israel demonstrators in Waterloo protested to raise awareness for “the human rights situation of Palestinian children.”

According to Bholla’s report, speakers at the event “recounted stories of Palestinian children being arrested and tortured by Israeli soldiers” and claimed that Palestinian “children were being arrested, taken to detention centres, harassed, interrogated, beaten and tortured to make them confess to something they may not have done.”

To buttress the Record’s article, reporter Bholla cites “Defense for Children International — Palestine, an independent human rights organization focused on Palestinian children.” Untold to Record readers, this organization was one of six Palestinian NGO’s that was recently designated as a terror group by Israel for its complicity in supporting terrorism. The six NGO’s stand accused of providing material support to the Popular Front for the Liberation of Palestine (PFLP), a banned terrorist organization, designated as such by the US, EU, Canada, and Israel. Apparently for the Waterloo Record, a terrorist organization is a reliable source.

Over at CBC News on November 28, an online article reported on another rally held in Winnipeg, but with the same utter lack of critical analysis, claiming that demonstrators merely wanted to draw attention to “protecting Palestinian children’s rights.” Same for CBC Radio who produced a short report (click immediately below) about this anti-Israel rally quoting organizers saying that “Palestinian children are being captured and sometimes tortured by Israeli forces oversees.”

Nowhere in the coverage of the demonstration was there any critical analysis of the incendiary claims that were made. While the allegations made by protesters about alleged Israeli human rights abuses make for shocking headlines, they are at best misleading, and at worst, utterly fictional. 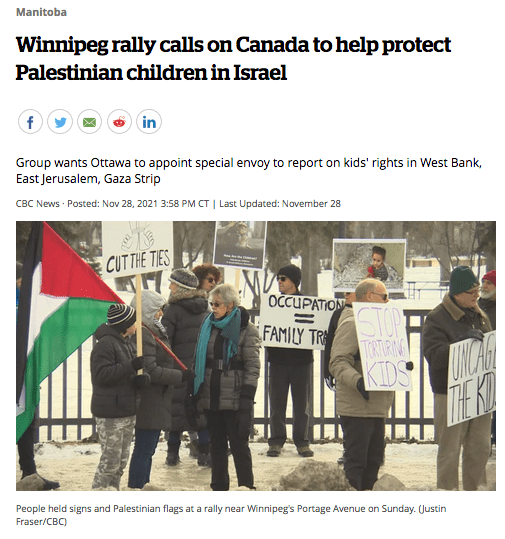 Palestinian children have been used for many years used as a powerful propaganda tool against Israel, with seemingly little concern about their well-being.

Perhaps the most well-known Palestinian child is Ahed Tamimi, who became a popular face of anti-Israel hatred by the time she reached her early teens. Although there are copious records of her praising Palestinian suicide bombers and calling for armed conflict with Israel, as well as videos of her physically assaulting Israeli soldiers, clearly hoping for a response on camera, a great deal of media coverage of Tamimi was far from critical, but borderline fawning and describing her as an “icon of the Palestinian resistance movement.”

Waterloo Record reporter Bholla stated that “between 500 and 700 Palestinian children, some as young as 12 years old…are charged under military law and imprisoned by the Israeli government yearly,” but little context is given. While she acknowledged that most of those arrested were guilty of rock throwing, this sheds little light on its true horrific nature. 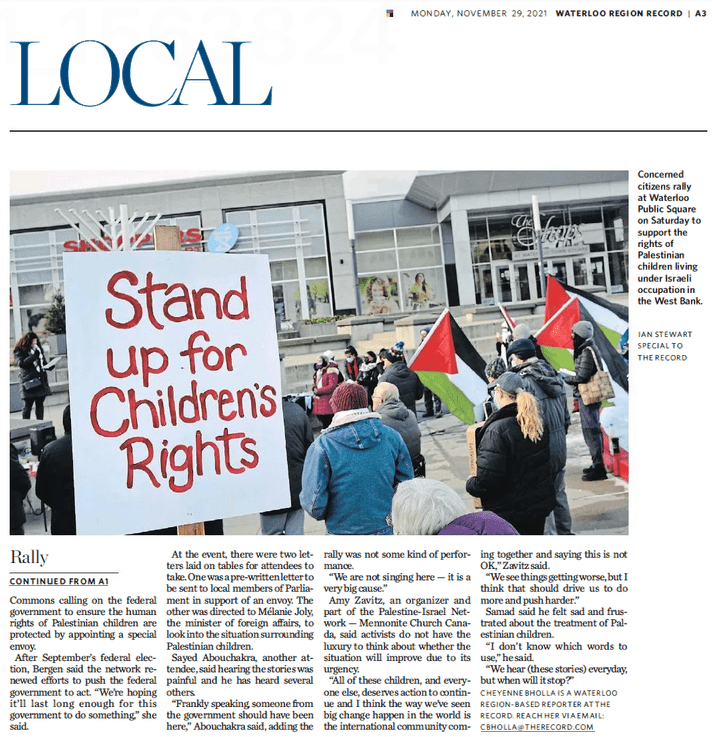 When the Israeli military arrests rock throwers, they are not arresting people who toss pebbles, but rather large stones – some larger than bricks – which are thrown with the specific intent to injure and kill. And rocks thrown by Palestinian rioters have done exactly that, having claimed the lives of many innocent Israelis, some of which were young infants like Judah Shoham, who was killed at the age of five months by Palestinians throwing stones. Similarly, Jonathan Palmer never reached his second birthday; he was killed with his father when stones were hurled at their car.

Importantly, it’s not a war crime to incarcerate minors who commit atrocities. Hakim Awak was a minor. In 2011, he and his 18-year-old cousin brutally murdered the Fogel family, three-month-old Hadas, her two brothers (aged four and 11) and their parents. The crime scene included a toddler’s severed head which left even experienced police officers distraught. The Palestinian cousins proudly confessed to their killings showing no remorse.

In 2016, Daphna Meir, a Jewish mother of six, was brutally murdered by a 15-year-old Palestinian teen who fatally stabbed her in her home in Judea and Samaria.

Palestinian terrorists cynically manipulate children to take part in suicide bombings, stabbings, arson, etc. Palestinian minors have also been involved in shootings, grenade, and other explosive attacks, along with kidnappings, transfers of weaponry, assault and murder.

It is unclear exactly what these rally organizers would propose that Israel do in the face of violent acts of terrorism committed against it, since arresting perpetrators of attempted murder apparently constitutes a human rights violation in their eyes. Keep in mind, the Palestinian Authority and Hamas encourage these acts of violence and don’t arrest the offenders.

While media outlets like CBC and the Waterloo Record reported on the allegedly terrible crime that Israel commits by daring to arrest Palestinian youth for attempting to commit deadly terrorist attacks against the Jewish State, the words “terrorism” and “rioting” did not appear a single time in either news article. That is akin to news coverage about a trial of murder or attempted murder, when the details, names or context aren’t mentioned at all.

While both media outlets carry claims that there is a military “occupation” carried out by Israel, what they don’t make clear is that under international law, Israel is obligated to operate a military court system. The alternative would be for Israel to administer Israeli civil law to the disputed territories, which would effectively amount to de facto annexation.

What is truly tragic is how countless Palestinian children have been used and abused by their own figures of authority as a cudgel and pawns in a propaganda war against Israel.

Make no mistake, the rights of children are extremely important, but Israel says that it abides by international standards to safeguard children’s rights when they are detained. As Israeli officials have previously explained: “When a minor involved in terrorist activity is arrested, the law is clear: No torture or humiliation is permitted, nor is solitary confinement in order to induce a confession, a special juvenile court has been established to guarantee professional care for minors in detention. The above and other measures have succeeded in making legal proceedings easier for minors, and have almost halved their duration.”

Israel respects international treaties and affords full rights for detained minors including visits by the Red Cross and the right to legal counsel. None of this context was included in the Record’s or CBC’s reports, nor were any Israeli officials quoted. So much for fairness and the pursuit of the truth.

Given the widespread state of anti-Israel and antisemitic propaganda in the Palestinian territories, it is hardly a surprise when the next generation of Palestinians – told by the Palestinian leadership, media, religious leadership and elsewhere that Israel is a foreign cancer on their land – seeks to rectify that perceived injustice by killing innocent Israelis. The force-fed incitement against Israel, targeting Palestinian children specifically, amounts to child abuse, plain and simple.

In essence, these Palestinians who are arrested by Israel while attempting to murder Israelis may be children, but they are not acting alone, and to simply parrot the baseless claims of rally organizers without giving context is to do a gross injustice to the truth. The more that mainstream Canadian news coverage gives a tacit pass to the criminals who groom children to commit terrorist acts, and to their Canadian enablers organizing disingenuous public demonstrations, the more that the truth is whitewashed, and the real victims of hatred, murder and terrorism are swept under the rug.