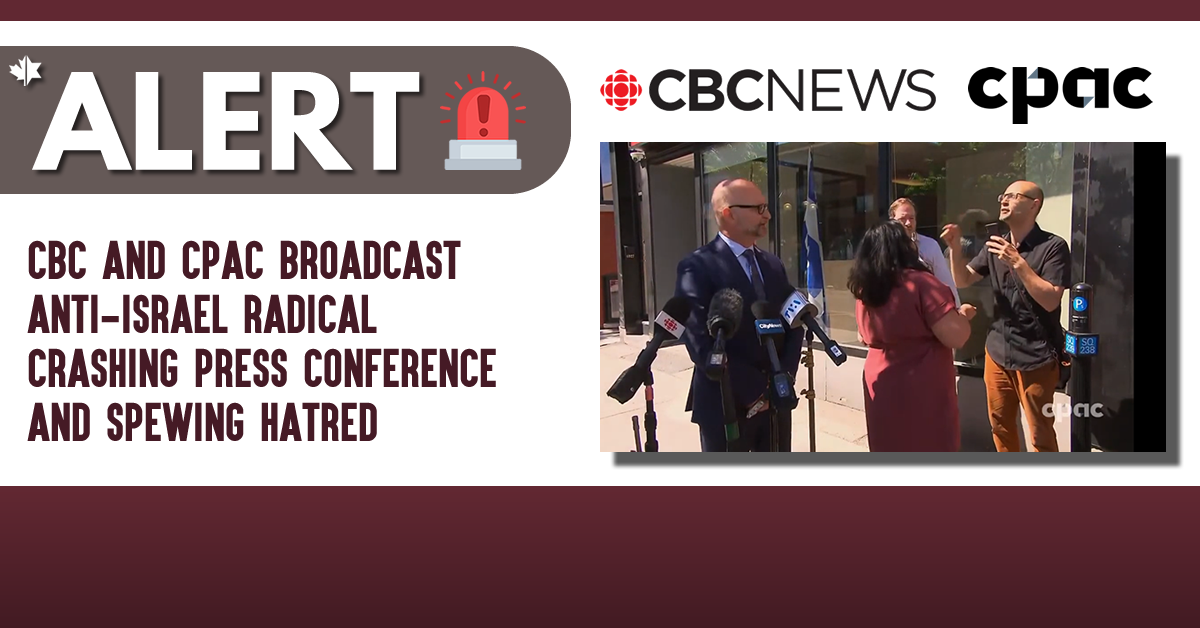 On Wednesday, May 25, Justice Minister David Lametti held a press conference on the constitutional rights of minorities in Quebec.  Halfway through the press conference, Justice Minister Lametti was interrupted by a radical anti-Israel activist named Yves Engler, who criticized Canada’s support for Israel, which he deemed an “apartheid” state, that he claims illegally recruits Canadians into the Israel Defense Forces, that “… kills Palestinians and oversees a brutal occupation.”

Instead of cutting away from this radical interrupting the press conference, CBC News gave the anti-Israel activist a national platform to spew disinformation, falsehoods, and anti-Israel hatred for over 2 minutes. On top of this, CPAC, a TV channel dedicated to political and governmental affairs (owned by a consortium that includes part-owners Rogers Communications, Shaw Communications, Vidéotron, Cogeco, and Eastlink) uploaded the entirety of the press conference, including the interruption, to its YouTube page, which has over 110,000 subscribers.

Broadcasting this anti-Israel screed can have severe consequences in the real world. CBC and CPAC gave an undue platform for an anti-Israel detractor to spread disinformation and propaganda, the likes of which have the potential to fan the flames of hatred against Jews, which again in 2021, was the most targeted group for hate crimes in Canada.

We have filed a complaint with CBC News to express our view that our public broadcaster should have cut away quickly upon the interruption of this press conference, instead of giving this radical activist a national platform for disseminating disinformation, falsehoods, and anti-Israel hatred.

We also have relayed a message to CPAC, that while they own their own material, they should have published an edited version of the press conference on their YouTube page, instead of disseminating Engler’s anti-Israel polemic to their 110,000 subscribers.

This is not the first time that radical Yves Engler has beratted our elected officials about Canada’s pro-Israel policies. On May 26, 2022, Yves Engler confronted the Chair of the Canada-Israel Interparliamentary Group, Anthony Housefather, where he asked Housefather to condemn the killing of Shireen Abu Akleh, insinuating that it was Israel who killed her.

By insinuating this accusation and posting the video online, Engler continues to spread disinformation.