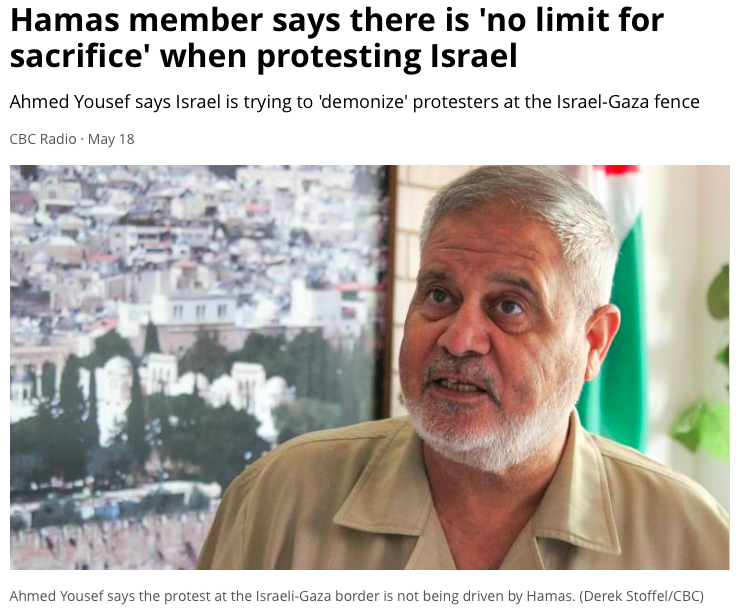 Shortly after conducting a hostile and combative interview with former Israeli Ambassador to the U.S., Michael Oren, on May 16, and then subsequently giving a platform on May 17 to Avner Gvaryahu, the Executive Director of the anti-Israel and radical organization known as “Breaking the Silence” to condemn Israel, CBC As It Happens and Anchor Carol Off appear to have tried to walk back their controversial anti-Israel programming by featuring a segment on May 18 with Hamas member Ahmed Yousef.

To listen to the interview click here or on the image below:

As It Happens featured what Off describes as an “accountability interview” with Yousef who’s an advisor to Hamas leader Ismail Haniyeh.

Yousef, who was quite happy to have been granted a platform by our public broadcaster, claimed that “the the whole march, it was peaceful and the people who were being gathered there [were] from all walks of life. The Israelis are all the time trying to demonize the demonstrators by [stigmatizing] them with Iran, with Hamas — all this nonsense.” (In sharp contrast, the rioters had assault rifles, meat cleavers, IED’s, molotov cocktails, and more. Furthermore, while Yousef in English to a western audience denies Hamas’ ties to Iran, Hamas leader Yahya Sinwar lauded the “strong, good and warm” ties Hamas has with Iran in Arabic programming. The IDF noted that: “The mask has been pulled off. Hamas is Iran, Iran is Hamas. The terror along the security fence is an Iranian mission.”)

The mask has been pulled off
Hamas is Iran
Iran is Hamas
The terror along the security fence is an Iranian mission pic.twitter.com/M3J38E7haB

Off then asked: “Did you not encourage people to go to the fence to try and push through it knowing that they would likely be killed?” to which, Yousef replied “This is the propaganda of Israel.” Off’s rejoinder: “No, this is the Washington Post and the New York Times, who were there and saw this.”

With respect to how Hamas posted maps on Facebook for their operatives showing the quickest routes from the border with Israel to Israelis’ homes, schools, and day-care centers near the border, Yousef dismissed these undisputed facts by saying: “This is not the credible source for information.”

To her credit, Carol Off pressed Youfef with this line of questioning:

Off: “Senior Hamas officials said this week that 50 of the 62 people who have died were members of Hamas.”

Off: “No, this is not Israeli propaganda. This is your own officials.”

Yousef: “Sometimes they are adopting this political faction because they might be able to cover the expenses for medical treatment or something like this. That’s what the people waving the flags of certain organizations, because they know that they might be able to cover their expenses. But the reality is that people who’ve been there are not there because of Hamas.” 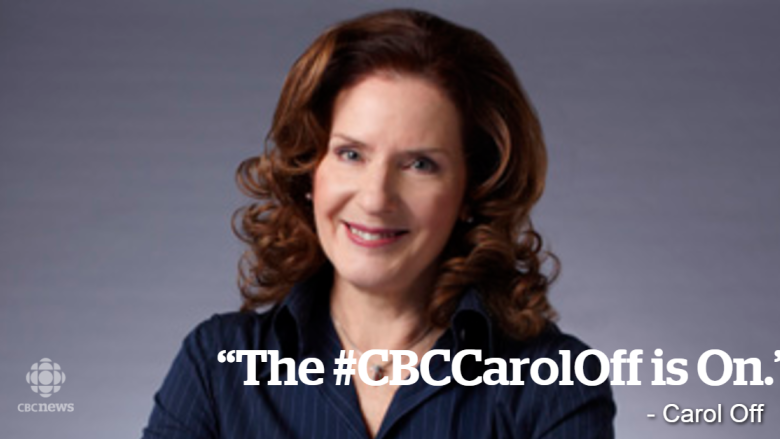 Off then said (emphasis added): “… there are images and videos of Palestinians shooting Israeli drones with guns. So, were there not weapons at the fence?” It’s noteworthy that Yousef did not deny that their operatives had guns and various weapons at the riots, he claims they were “defending ourselves.”

While it’s a small step in the right direction for CBC As It Happens and Anchor Carol Off to have asked important questions to this representative of the Hamas terror organization, it in no way vindicates this CBC journalist and news program for its recently conducting hostile and combative interviews with an Israeli representative and for giving a platform to a radical anti-Israel organization. HonestReporting Canada will continue to vigilantly listen to and respond to CBC bias against Israel.