On January 22, the CBC News website published an Associated Press article with the following unfair and misleading headline about a Palestinian terror attack at the Gaza-Israel frontier:

HonestReporting Canada contacted CBC News conveying that this headline didn’t properly explain the incident at hand and ran the risk of having CBC readers think that Israel may have killed 3 presumably innocent Palestinians after an attack that had taken place near the Gaza fence. As we told the CBC, the headline should have identified the Palestinians as either alleged assailants/attackers/infiltrators. Importantly, YnetNews reports that all 3 were dispatched by the Iranian-sponsored Islamic Jihad terror group.

In fact, the Israel Defense Forces said the following about this incident:

We just identified 3 terrorists who crossed the security fence from #Gaza into #Israel. After our soldiers arrived at the scene, the terrorists hurled an explosive device at them.

In response, our soldiers opened fire at the terrorists.

As a means of comparison, France 24’s headline properly identified the Palestinians as “attackers”. It said the following:

To the CBC’s credit, our public broadcaster recognized that this headline was misleading and amended it to now acknowledge that the Palestinians were “attackers”. To see the CBC’s revised article click here and see a before and after comparison here: 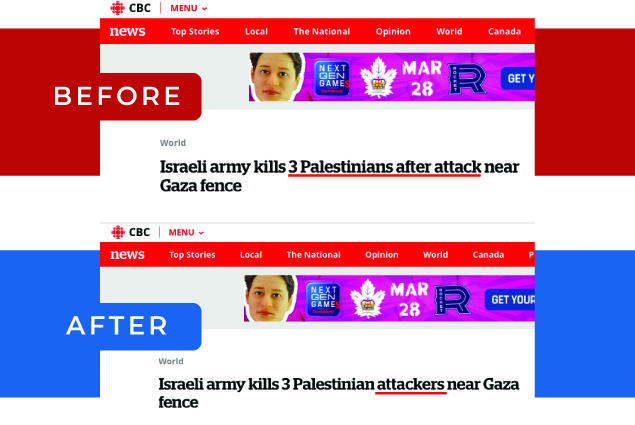 HonestReporting Canada thanks the CBC for its swift corrective action and for its cooperation.