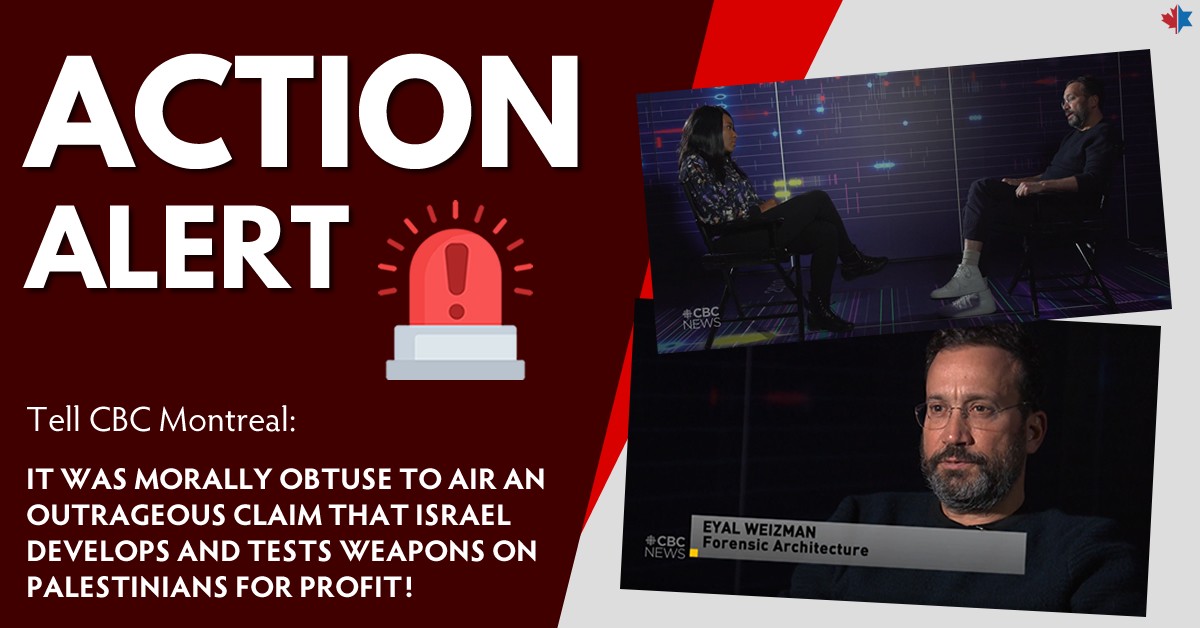 On December 4, CBC Our Montreal broadcast a report about a new exhibit at Montreal’s Musée d’art Contemporain which documents how the Pegasus malware was used by governments to target hundreds of journalists and human rights workers.

CBC host Catherine Verdon-Diamond spoke with filmmaker Laura Poitras and Eyal Weizman of Forensic Architecture, two of the artists behind the exhibit.

The report focused on the NSO Group, an Israeli cyberweapons manufacturer that created cyber surveillance and military-grade cyberweapon through malware.

There’s nothing wrong with CBC conducting a report on this private Israeli company which has been under scrutiny, but CBC crossed the line when it broadcast a statement by Eyal Weizman, of the British “research agency” Forensic Architecture, who outrageously claimed that Israel uses its domination and “occupation” of Palestinian civilians as a “laboratory” to test and develop new weapons which it uses to export worldwide and turn a profit.

Weizman said the following: (Queue to the 6:17 mark of the video)

The NSO Group is one of an ecosystem of Israeli cyber-surveillance and cyber security companies that have developed in the shadow of the Israeli occupation of Palestine. The domination of Palestinians, in Israel and the occupied territories, is some kind of a lab in which new technologies and new weapons are being designed and exported worldwide. In fact, a lot of Israeli intelligence work, requires and relies on cyber capacities. Israel regional power is, Israel regional domination in the area rests on its cyber capabilities. Palestinians in the occupied territories are surveilled as they’re moving between their home, the workplace and that has provided an enormous laboratory for Israel to develop these technologies that are therefore and later marketed and tested in action and become products on a global market.”

As HonestReporting has previously reported, Eyal Weizman is an Israeli expat who also conducted research on behalf of B’Tselem on the “planning aspects of the Israeli occupation of the West Bank,” and who has close ties to multiple radical left-wing organizations operating in Israel. He has also been declared a “security threat” by the United States and denied entry to the country.

HonestReporting notes that “the research firm in question, Forensic Architecture, has conducted 66 investigations to date, of which 14 focused on the actions of Israeli soldiers or the relationship between Israelis and Palestinians. In other words, one in every five investigations it has carried out has looked into Israeli behaviour.”

Forensic Architecture claims to investigate “human rights violations, and communities in conflict zones or otherwise subject to state failure or violence.” A seemingly noble goal, but one which HR notes casually discards the need to research the human rights violations perpetrated by non-state actors, such as terrorist groups.

Forensic Architecture has a history of obscuring facts when it comes to issues pertaining to Israel. For example, HonestReporting previously called out the body for accusing the IDF of “executing” a terrorist who deliberately rammed his car into a soldier in an investigation titled, “The Extra-Judicial killing of Ahmad Erekat.” The group was also the source of a front-page New York Times article that conspiratorially suggested the unintentional death of a Palestinian medic was perhaps not accidental.

CBC’s own Journalistic Standards and Practices dictate that “CBC takes responsibility for the consequences of its decision to publish a person’s statements in the context it chooses. When we present a person’s statements in support of our reporting of facts, we ensure that the statements have been diligently checked. In the case of comments made by a person expressing an honest opinion, we ensure that the opinion is grounded in facts bearing on a matter of public interest.”

CBC’s choice to air Eyal Weizman’s outrageous claim that Israel tests and develops new weapons on Palestinian civilians for profit is morally repugnant, baseless, and a violation of CBC policies as his comment isn’t grounded in facts. Send a complaint directly to CBC Our Montreal to communicate your concerns directly to our public broadcaster: ourmontreal@cbc.ca.