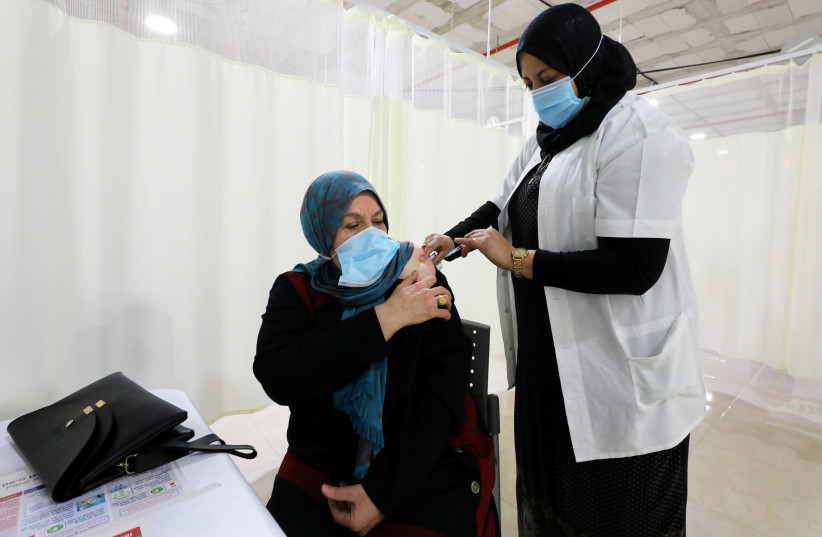 A woman receives a vaccination against the coronavirus disease (COVID-19) at a vaccination center in Umm El-Fahem, Israel January 3, 2021(photo credit: REUTERS/AMMAR AWAD)

It seems that there’s nothing Israel can do, or not do, to spare it from unfair critique in the news media.

When it comes to the race to vaccinate against COVID-19, Israel is leading the pack and doing so by a wide margin. Israel has vaccinated more people as a percentage of its overall population, than any other country in the world, with more than 14 percent of the population having received the first vaccine dose by early January. In comparison, about one-third of one percent of Canadians have received that same dose.

While Israel’s success in the vaccination race has been rightly highlighted and mentioned by various Canadian news media outlets, it has also been criticized by some Canadian media, namely the CBC, for failing, in their views, for its supposed duty to also vaccinate the Palestinians. (This canard was thoroughly debunked by Jerusalem Post reporters Lahav Harkov and Seth Frantzman.)

On the morning of January 29, CBC Radio produced a segment by freelance reporter Irris Makler on Israel’s vaccine rollout mentioning that over 3 million Israelis have received vaccine doses, but Palestinians in the west bank have not.

On January 14, on the Power Panel with Vassy Kapelos, one of the panelists, Le Devoir columnist Emilie Nicolas, erroneously stated the following:

First of all, I just want to correct something that was just said. Israel is not about to vaccinate the entire population of Israel. It is not vaccinating any Palestinians living in Israel and I think that’s something to mention…”

This is an outright falsehood. In truth, Israel is vaccinating all of its citizens, Jews and Arabs alike. For Israel’s Arab residents who self-identify as Palestinians, they are most certainly being vaccinated. It’s very simple, any non-citizens are not being vaccinated, but to spread the falsehood that Israel is discriminating against its Arab citizens and providing preferential health care for Jews is appalling. Palestinians in Gaza and areas of the west bank will be vaccinated under the health care of the Palestinian Ministry of Health, with perhaps the WHO’s assistance, and/or perhaps the Hamas terror group (unlikely though!) Importantly, this statement was not challenged by Ms. Kapelos. An on-air corrective is most certainly called for to set the record straight and one that doesn’t further muddy the waters and that is unambiguous about the truth of this situation.


On CBC Radio’s The World This Weekend on January 9, the anchor orated a 1:40 segment about how the anti-Israel NGO Amnesty International accuses Israel of denying Palestinians the vaccine. The CBC show interviewed Saleh Hegazi, Amnesty International’s Middle East Deputy Director, who claimed Israel is an “occupying power” and that Israel is engaging in “institutionalized discrimination on Palestinians.” No rebuttal was featured by a pro-Israel source, nor was context provided. After HRC intervened, an on-air correction was aired on January 18.

1) Galloway: “… Israel, as you know, is facing fierce criticism. Why are Palestinians in the West Bank and Gaza not included in this very successful vaccination program.”

2) Galloway: “You’ll forgive me for asking again though, what is the resistance from within the Israeli government, what’s the resistance in getting the vaccines to people in the West Bank and the Gaza Strip? You say there’s a political resistance.”

On CBC The National on January 4, Anchor Adrienne Arsenault (former CBC Mideast bureau chief) felt it necessary to start off her report by saying: “The country is small, that helps with getting shots in arms, but Palestinians in Gaza and the occupied West Bank still don’t have access to the vaccine, that is a worry, but when it comes to Israeli citizens, though they are being vaccinated faster than anyone else in the world.”

In an TV interview that aired on January 3 with Canada’s former ambassador to Israel, Vivian Bercovici, CBC Anchor Natasha Fatah said the following which was met by a strong rejoinder by Bercovici:

Fatah: “One of the major criticisms of how Israel is handling the vaccine rollout is that Palestinians are not getting access to the vaccines and it’s getting a tremendous amount of criticism for that reason, that for many people once again it shows a divide between Israelis and Palestinians, the haves and the have nots, and so, I wonder, what’s your interpretation of how this is playing out.”

Bercovici: “The mainstream media globally has demonstrated that it never misses an opportunity to misrepresent what’s going on in the ground here, in particular, perpetuating the Palestinian narrative of being victims…”

Also, in an otherwise positive article by CBC reporter Mark Gollom on January 2 about “Why Israel is leading the world with Covid-19 vaccinations,” the following was said:

“But the rollout is not without some controversy. Palestinians in the occupied West Bank and in the Gaza Strip will not be vaccinated by Israel, a responsibility that some aid groups believe Israel shares with Palestinian officials.”

As well, a caption to a tape-talk with freelancer Irris Makler on January 2 said: “Palestinians in Gaza and West Bank not vaccinated by Israel”. 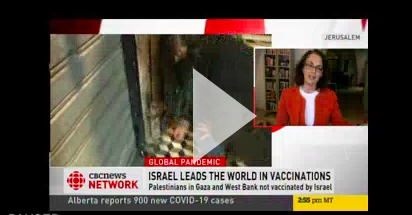 There are many problems with the statements made by these CBC journalists:

Firstly, Israel and the Palestinian Authority (PA) are distinct legal entities with their own independent responsibilities to their respective populations. While all of Israel’s two million Arab citizens are fully entitled to receive the coronavirus vaccinations because they are citizens of the State of Israel, those living in the Gaza Strip or under the Palestinian Authority-controlled areas are not citizens of Israel, and their civil affairs are not managed by Israel, but by the Palestinian Authority. More than 100 countries in the United Nations recognize “Palestine” as a state, and it has a Prime Minister and its own functioning bureaucracy and foreign policy. The Palestinians cannot simultaneously be independent and not independent at the same time. All residents of the Gaza Strip – run by the Hamas terror group – and virtually all of the Palestinians in Judea & Samaria or the West Bank, are under the complete civil management of their own government, not Israel, and any suggestion that Israel still bears responsibility for their public health is putting a bizarre double standard in place that is not expected of any other nation-state.

In short, Israel does not bear the legal or moral obligation to vaccinate the Palestinian populations against the coronavirus any more than it bears responsibility to vaccinate any other Middle East country or population, or even Canadians for that matter. But nevertheless, in March, as the virus began its spread in the Middle East, Nickolay Mladenov, the UN Special Coordinator for the Middle East Peace Process, referred to the “excellent” cooperation between Israel and the Palestinian Authority on public health cooperation related to the coronavirus.

Secondly, and perhaps most fundamentally, the Palestinian Authority has not even made any request to Israel for vaccines. The Jerusalem Post reported recently that an official with the PA Ministry of Health was clear that they did not ask Israel for any inoculations. “We are not a department in the Israeli Defense Ministry. We have our own government and Ministry of Health, and they are making huge efforts to get the vaccine,” the official was quoted as saying.

But that does not mean the Palestinians are without a vaccine. In fact, according to the PA’s commissioner of public health, Dr. Osama Anjar, as reported in the Israeli newspaper Ha’aretz, the Palestinians are slated to receive four million doses of a Russian-made vaccine.

The idea that Israel has a responsibility to vaccinate Gaza, which it doesn’t administer or parts of the West Bank that many recognize as the presumptive Palestinian state under its own authority, is not logical. Must Cyprus vaccinate Turkish-occupied Cyprus? Is Turkey vaccinating Idlib.

So, if Israel bears neither legal nor moral obligation to provide vaccines to the Palestinian Authority, which has made clear that it’s expected to receive millions of doses from other avenues, why is the suggestion being made by journalists that Israel is somehow at fault? 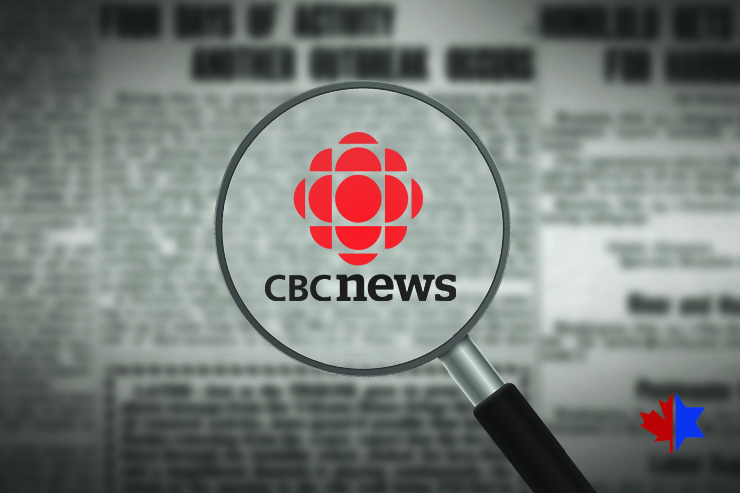 There may finally be an end in sight for the coronavirus pandemic, and Israel has shown that swift, mass public vaccinations are possible, creating a model for countries including Canada to emulate. While Israel and the Palestinians have been lauded for their exemplary cooperation on virus-related public health issues, the ultimate responsibility for vaccinating the Palestinian people is their own government, and in fact nobody has been more emphatic of this fact than the Palestinian Authority.

HonestReporting Canada has communicated these concerns, and more, directly to our public broadcaster and we encourage you to voice your concerns as well. To file a complaint with CBC, click here.

Indeed, the sooner that the CBC and other Canadian media outlets stop holding Israel to unreasonable expectations, and start expecting competence from the Palestinian leadership, the Palestinian people will be far better off as a result.