Congrats to HRC letter writer Gordon Vinberg for taking the Catholic Register to task for its 1-sided reporting which portrayed Gaza as an “open-air prison”.

Here’s the letter which was published on February 9: 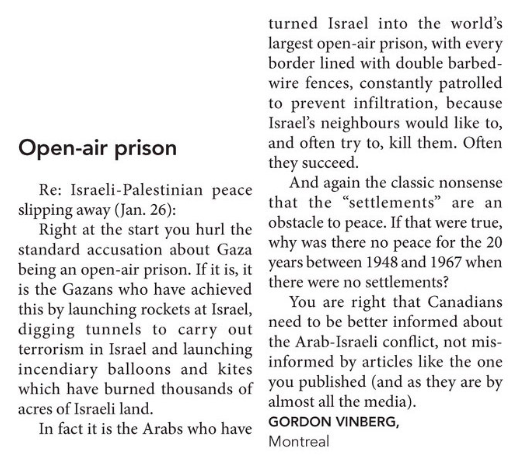 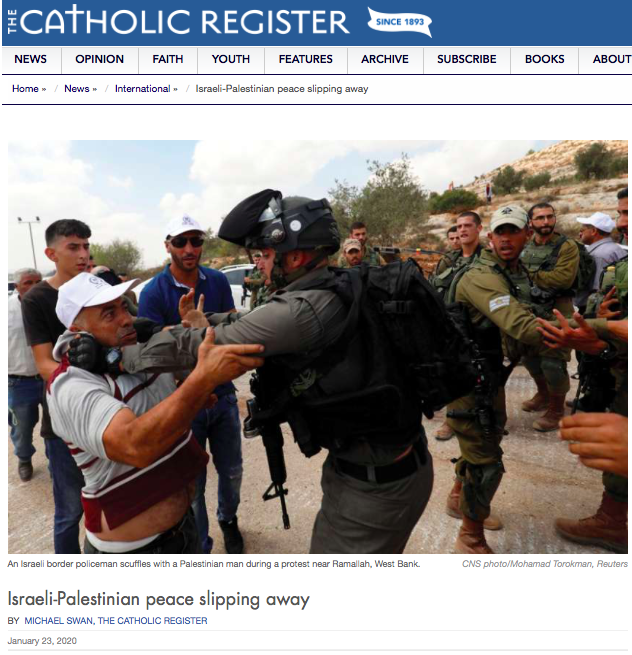 In an article featured in the Catholic Register on January 23, Michael Swan, Associate Editor at the Register, penned a one-sided portrayal of the “Israeli-Palestinian conflict” depicting Gaza as an “open-air prison” and Israelis as usurpers of Palestinian land.

Naturally, there was no mention made of Jewish connections to Judea and Samaria and Israel’s legal rights to the areas in questions and to control lands seized in a defensive war against annihilation, until peace is procured with the Palestinian-Arabs and until secure and recognized borders are brokered.

The article entitled “Israeli-Palestinian peace slipping away” featured a photo depicting an armed Israeli soldier scuffling with a Palestinian man during “protests” in Ramallah. Naturally, there was no context about what initiated this incident.

The article describes how Richard Gagnon, the President of the Canadian Conference of Catholic Bishops, went on a recent trip to the region describing Gaza as “an open air prison” and Gazans as Israel’s prisoners. The article fails to contextual how the Egyptian-Israeli blockade of Gaza is UN-approved, legal and is designed to prevent and thwart terror attacks emanating from Gaza, a territory ruled by Iranian-sponsored Hamas terrorists. It’s a given that the article failed to mention the hundreds of thousands of tonnes of humanitarian aid that Israel facilitates to Gaza. Gagnon, also wants Canada to recognize the non-existent state of “Palestine,” but there was no mention in the article about how the Palestinians do not have effective and defined control of the lands in question, nor the required institutions for statehood. Just because Canada doesn’t recognize that the Palestinians have a state, does not mean that Canada (and the European Union) don’t recognize the Palestinian right to self determination as Mr. Swan erroneously claims.

The article also features a disturbing moral equivalence between Hamas missile attacks and Israel’s settlement communities which Mr. Swan claims are “illegal” and are built on “Palestinian land”. Setting aside your views about the merits of Israel’s settlement policy, you cannot equivocate between Hamas’ efforts to murder innocents with Israel’s constructing homes and resultant expansion which accounts for the natural growth of these communities. Mr. Swan fails to understand that Palestinians have never had sovereign title over any lands, ever and that Jews have ancestral, legal, and religious rights to the lands in question.

If Archbishop Gagnon were truly concerned about the plight of the Gaza Catholic community and Christians in the Palestinian territories, he should assign blame directly with Hamas and Muslim extremists who have persecuted Christians for many years. For example, just look at the current population of Bethlehem  and you’ll see that Christians have been ethnically cleansed from the city.  70 years ago, Christians represented 86% of the population and now they number just over 12%. Their plight, has led to their flight. It’s not a surprise that the only Christian population that is growing in the Middle East is in Israel with 177,000 citizens.

Untold by the Register, is how Israel is a multicultural and pluralistic society with a rich diversity and mosaic of all peoples and all faiths.