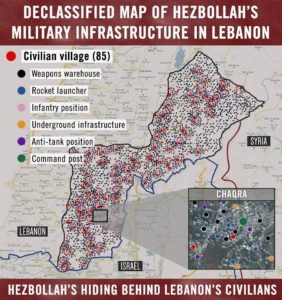 Recently, Canadian pundits on CBC.ca, the Globe and Mail and in the Hill Times, all engaged in sophistry when arguing that Israeli Prime Minister Netanyahu intends to wage a war with Lebanon and Hezbollah, all in an effort to distract the Israeli public’s attention away from domestic corruption investigations. These claims are all baseless and beyond the pale.

Israeli Prime Minister Benjamin Netanyahu is under strong domestic pressure and drenched in scandal, and nothing distracts more effectively than a war against a despised enemy. Hezbollah fits that bill perfectly. Middle Eastern politics makes for strange bedfellows. Always has, always will.”

In the Globe and Mail on November 9, Bessma Momani, a Professor at Waterloo University and fellow at the Centre for International Governance and Innovation and Brookings Doha, wrote the following:

The bruised Prime Minister of Israel, Benjamin Netanyahu, would like nothing more than a conflict to rally his people around, and divert attention away from troubling corruption charges against him and his wife, and there is little doubt Israelis are pushing the Saudis to confront Hezbollah and Iran hard.”

Finally, in the Hill Times on November 20, Murray Dobbin wrote:

Netanyahu is mired in his own corruption scandal and needs a distracting war to survive.”

Dobbin described Netanyahu, along with U.S. President Trump and Saudi Arabian leader Mohammad bin Salman, as “three of the most dangerous autocrats on the planet.”

To contend that the Israeli prime minister would wage a war putting the lives and welfare of his citizens in great peril, all to distract attention away from local corruption investigations, is obscene. There’s no substance to these spurious allegations.

Should Israel go to war with Hezbollah, an Iranian proxy terror organization, it would do so because of the clear and present danger it poses with its 150,000 short and long-range rockets pointed at the Jewish state.