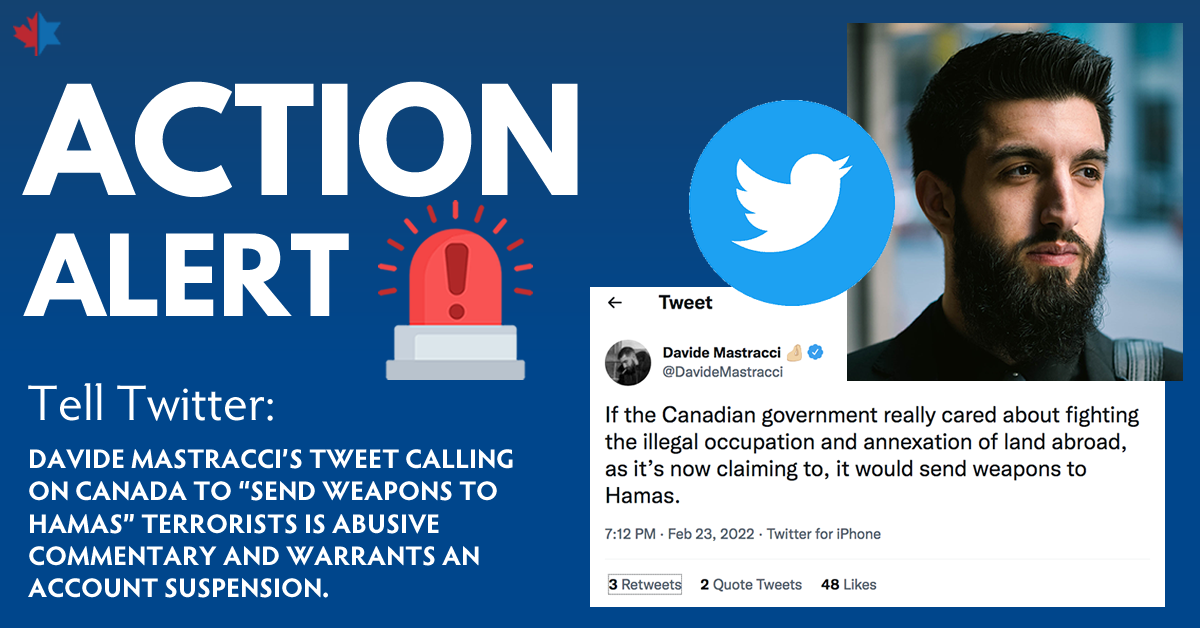 Davide Mastracci is the Managing Editor of Passage, a Canadian publication that claims to provide “thoughtful political, economic, and cultural ideas from a left-wing perspective.”

Mastracci describes himself as an “aspiring Marxist,” who produces a newsletter called “Now You Know” which claims to “track the Israel lobby’s influence on Canadian media,” and who has 10,800+ followers on Twitter. The social media giant lists Mastracci’s account as “verified” which means that it considers Mastracci’s views as being “notable in government, news, entertainment, or another designated category.”

Mastracci’s website notes that he’s been published in the past by the Globe and Mail, Walrus Magazine, Vice News, Canadaland, Huffington Post, Buzzfeed News, etc.

On the eve of Russia’s invasion of Ukraine on February 23, Mastracci published the following tweet where he advocated that the Canadian government should “… send weapons to Hamas,” a banned terrorist organization committed to Israel’s destruction, known for suicide bombings and which fired 4,000+ rockets at Israeli civilians in the most recent round of hostilities.

If the Canadian government really cared about fighting the illegal occupation and annexation of land abroad, as it’s now claiming to, it would send weapons to Hamas.

Standing in solidarity with Hamas, a radical Islamist terror group, is in our view, appalling and alarming. There’s no place in mainstream or social media for this kind of toxic discourse that only fans the flames of hatred against Israelis and the Jewish people.

Twitter’s own policies stipulate that: “There is no place on Twitter for violent organizations, including terrorist organizations, violent extremist groups, or individuals who affiliate with and promote their illicit activities. The violence that these groups engage in and/or promote jeopardizes the physical safety and well-being of those targeted. Our assessments under this policy are informed by national and international terrorism designations, as well as our violent extremist group and violent organizations criteria.”

HonestReporting Canada encourages you to report Davide Mastracci’s Tweet which encouraged Canada to send weapons to Hamas terrorists for abusive commentary. Call on Twitter to immediately suspend Mastracci’s account from its platform.

You can report this content for review via Twitter’s desktop version or on its app as follows:

You can also report this content for review via Twitter’s abusive behaviour reporting form, by selecting the specific violent threats involving physical safety or well-being option.

Please tag @Twitter and @TwitterSafety in any tweets you write on the topic.