HonestReporting Canada was alarmed to see Canadian public policy magazine, Policy Options, give none other than the godfather of modern terror, the late Yasser Arafat, the front cover of its April 2014 issue. 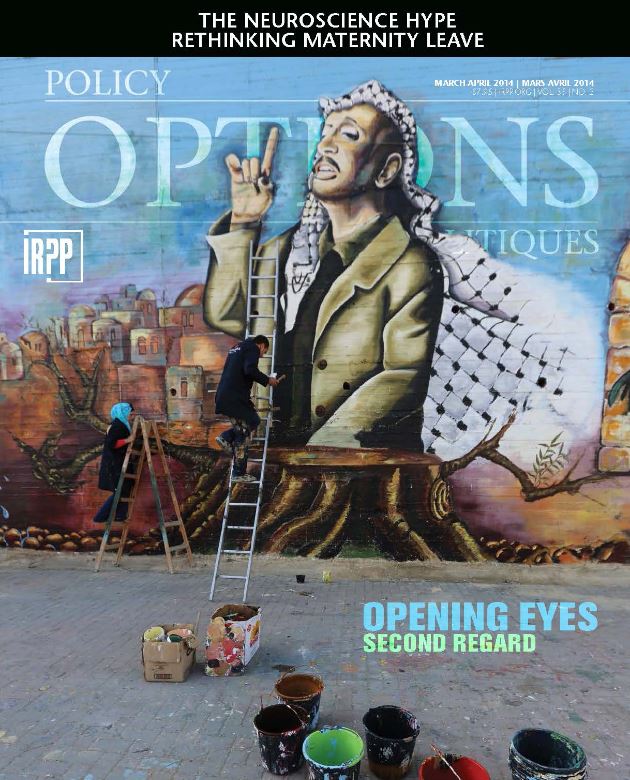 No, this is NOT an April Fool’s joke.

Policy Options, produced by the Institute for Research on Public Policy (IRPP), entitled this edition “Opening Eyes, Second Regard” and the cover page, the most viewed section of a magazine, featured a photo of a mural being painted by Palestinians that presents Arafat in a statesmanlike, almost iconic light. What this magazine failed to tell its  readers is that Arafat was responsible for the murder of almost  1,000 Israelis and the maiming of many thousands more. Arafat was responsible for inciting Palestinians to commit terror against Israelis via its official PA media, its educational infrastructure, and in public pronouncements.

Instead of informing Canadians of Arafat’s dark legacy and his bloodstained career of terror, this magazine referred at length to Israel’s “occupation” of Palestinian territories without mentioning what brought on the so-called “occupation”. The magazine failed to note that in 1967, Israel came to control east Jerusalem, Gaza and the West Bank in a defensive war after another attempt by Arab nations (Syria, Jordan and Egypt) to crush Israel. East Jerusalem and the west bank had been unlawfully occupied by Jordan since 1948 after the first war of annihilation against the nascent State of Israel. Israel disengaged from Gaza in 2005 removing over 8,500 settlers and its combined armed forces from the Strip. Until the fate of the territories is decided by a final peace agreement, Israel has the right to administer these lands.

In other words, the so-called “occupation” is not illegal, coming as it did in a defensive war. The legal status of the territories is thus “disputed”, in accordance with UN resolutions 242 and 338. Indeed, Israel also has legal and historical claims to the region. Israel’s legal claim to the west bank is by virtue of the Balfour Declaration, the San Remo Declaration of 1920, the League of Nations instrument, Article 80 of the UN Charter and the laws of conflict.

The magazine instead preferred to publish a photo essay entitled “In the shadow of occupation” which described Palestinian terror as “resistance”. In so doing, this magazine used inappropriate language that served to sanitize terror and cloud reader’s understanding of who these individuals are and what their intentions may be. The off-handed nature of this lexicon implies that “resistance” is somewhat legitimate. At the very least, it failed to communicate that for terror groups, “resistance” is a Palestinian euphemism for attacking Israelis, often civilians, in events such as suicide and bus bombings, rocket attacks, and restaurant explosions. In employing Palestinian diction, this magazine blurred the lines between legitimate resistance and outright terrorism as “resistance” is a partisan term that implies freedom fighter, not terrorist.

The magazine’s editor, Bruce Wallace, also falsely claimed in an editorial that  Canadian Prime Minister Stephen Harper said that Israel’s “critics” are “being motivated by hidden anti-Semitism”. Mr. Wallace seriously misrepresented Harper’s remarks in his speech to the Knesset where he explicitly stated: “No state is beyond legitimate questioning or criticism”.  Harper said that: “Of course, criticism of Israeli government policy is not in and of itself necessarily anti-Semitic”. Rather, what Harper deemed to be anti-Semitic is the singling out of Israel among countries of the world for selective condemnation and opprobrium: “But what else can we call criticism that selectively condemns only the Jewish state and effectively denies its right to defend itself, while systematically ignoring – or excusing – the violence and oppression all around it?”

The singling out of Israel for condemnation is included in the definition of anti-Semitism as set out in the Ottawa Protocols, of which Canada is a signatory. The protocol, drawn up by international parliamentarians in a series of conferences, specifically distinguished between criticism of Israel, anti-Semitism and indicated where the two overlap.

Mr. Wallace also blames Israel, and Israel alone, for the fact that no democracy exists in the west bank, letting the Palestinians off scot-free for its failures to provide a liberal democracy, rule of law, and required institution building. Mr. Wallace also unquestioningly raises the “apartheid” libel and engages in moral relativism when stating the following: “a toxic hatred for Israel exists in some -Palestinian quarters, just as there is racism toward Palestinians from many Israelis.”

Why this magazine chose to whitewash arch-terrorist Yasser Arafat and ignore his terror resume was deeply regrettable, along with its many misstatements and unfair presentation of the Israeli-Palestinian conflict. Please send your considered concerns to Policy Options magazine by sending letters to:  irpp@irpp.org